Omar Abdullah vows to restore Kashmir′s special status | Asia | An in-depth look at news from across the continent | DW | 24.10.2020 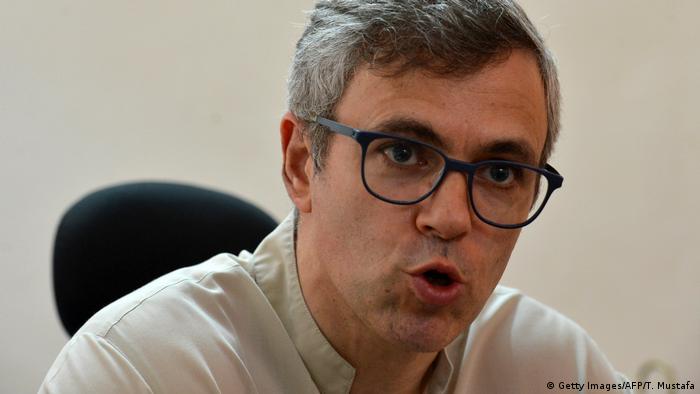 The government of Indian Prime Minister Narendra Modi has insisted that the revocation of the special status was needed to halt conflict and boost economic development in Kashmir. However, many Kashmiris consider the policy to be part of a systematic campaign of oppression from India's Hindu nationalist government.

Over the past year, Modi's government has also brought in a slew of new laws that locals say are aimed at shifting the demographics in the Muslim-majority region. The military, meanwhile, has intensified its counterinsurgency operations in recent months.

When the Indian government took away the state's autonomy, it also arrested thousands of politicians and activists, among them Omar Abdullah, a former chief minister of Jammu and Kashmir.

DW: You were jailed for eight months under the Public Safety Act, soon after New Delhi abrogated Kashmir's special status last year. How do you feel about it?

Nothing can justify the Indian government's step last year to strip Kashmir of its [semi-autonomous] status. It violated the country's constitution by splitting the state into two union territories. People in Kashmir were not consulted or taken into confidence over it.

Regional political parties are joining forces to restore Kashmir's status through a legal battle. Do you think they have any chance to succeed?

It is an important development. We are fighting a democratic battle to undo New Delhi's August 5, 2019, measures. We are hopeful that we will receive justice from the Supreme Court. It is not an electoral alliance; it's our political "meeting point" to restore Kashmir' status.

There has been no political activity in the region since New Delhi's abrupt move last year. Apart from the legal battle, what other steps you plan to take to restore Kashmir's special status?

We will fight this battle on several fronts. At present, we are facing a pandemic, so we need to improvise our methods. Once we have a proper structure in place, we will formulate a strategy. It will be a combination of social media campaigns and communication with people through other ways.

We will keep the issue alive. We will continue to raise it in Parliament and engage with like-minded political parties.

You said recently that you would not contest state elections while the region continues to be a union territory. What is the rationale behind it?

Jammu and Kashmir's special status was an important and indispensable part of the state's accession to the Indian federation. The status that we had enjoyed was not a favor to us; it was the basis of Kashmir's accession to India. There is no question of my contesting any election under present circumstances.

It is a flawed argument. For the past three decades, Kashmir has faced militancy because of Pakistan-sponsored terrorism. Also, militancy has not stopped in the region since August 5, 2019, which proves that the Indian government's argument is wrong.

How are people in Kashmir reacting to the post-August 2019 political situation?

People are agitated and disappointed. They have yet to come to terms with the implications of the government's decisions. Many are still in a state of shock. The voice of the common people is missing in the debate about Kashmir. It doesn't augur well for the state.

Omar Abdullah served as chief minister of the Indian-administered Kashmir from 2009 to 2015. He is also the vice president of the National Conference party.