The dispute over Kashmir has poisoned relations between India and Pakistan since the two became independent countries in 1947. Here's an overview of how tensions have grown more dangerous over the past seven decades. 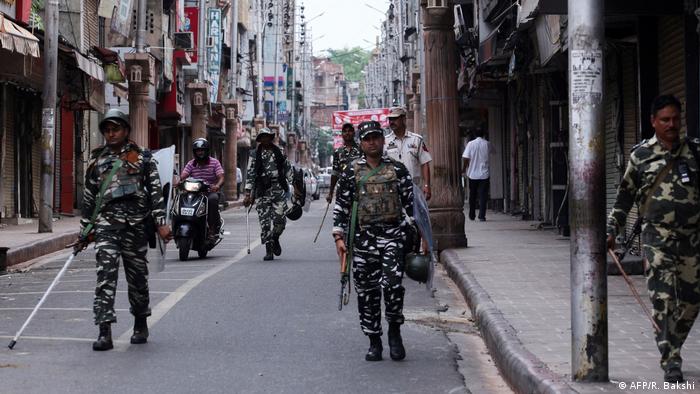 Like so many conflicts around the world, the dispute over Kashmir began with independence from a colonial power. In 1947, the United Kingdom gave in to the struggle for freedom in its Indian colony and granted it independence. The retreating British left behind two states: the secular Indian Union and the Islamic Republic of Pakistan.

The partition of India in 1947 presented a problem to the then princely state of Jammu and Kashmir, located right along the two new states' northern border.

Traditionally, the state was ruled by a Hindu maharaja (local ruler), but the majority of the population was Muslim. Hoping to be able to declare his territory independent, Maharaja Hari Singh initially did not join either India or Pakistan, both of which took an interest in this special social constellation in the Kashmir Valley.

To this day, India sees itself as a secular nation in which several religions coexist. This makes Jammu and Kashmir, the only province with a Muslim majority, an important part of India's religious plurality.

At the time, Pakistan saw itself as the home of all Muslims in South Asia. Its founding father, Muhammad Ali Jinnah, envisioned Pakistan and India as separate Muslim and Hindu nations on the subcontinent. Until 1971, Bangladesh, which is located to the east of India, was part of Pakistan.

While the maharaja hesitated to make Kashmir part of either country, in 1947, Pakistani guerrillas tried to bring the principality of Kashmir under their control. Hari Singh turned to New Delhi for help, and it didn't take long for troops from India and Pakistan to face off.

The first war for Kashmir began in October 1947 and ended in January 1949 with the de facto division of the state along the so-called Line of Control (LoC), the unofficial border line still recognized today.

Back then, the UN sent an observer mission that is still on the ground today. Pakistan has controlled the northern special province of Gilgit-Baltistan and the sickle-shaped Azad Kashmir sub-region since 1949.

The Indian-held section became the federal state of Jammu and Kashmir in 1957, with special autonomous status allowing the state's legislature to have a say in legislation covering all issues except defense, foreign affairs and communications.

The following decades were marked by an arms race on both sides. India began to develop a nuclear bomb and Pakistan also started a nuclear program with the aim of being able to stand up to its giant neighbor. Today, India and Pakistan have an estimated 140 and 150 nuclear warheads respectively. Unlike Pakistan, India has explicitly ruled out a nuclear first strike.

Pakistan also spends huge amounts on its nuclear program as the country tries to make sure it won't lag behind its neighbor in military terms.

In 1965, Pakistan once again used military force to try to change the borders, but lost to the Indian military. The neighbors clashed for a third time in 1971, but this time Kashmir was not at the center of the confrontation. Instead, it was the independence struggle in Bangladesh that precipitated the war. India, which supported the Bangladeshi independence fighters, once again defeated Pakistan.

A year later, India and Pakistan signed the Simla Agreement that underlines the importance of the LoC and commits to bilateral negotiations to clarify claims to the Kashmir region once and for all.

In 1984, the nations clashed again; this time over the India-controlled Siachen Glacier. And in 1999, both sides fought for control of military posts on the Indian side of the LoC. In 2003, India and Pakistan signed a new ceasefire — but it has been fragile since 2016.

China, which has a long border with Jammu and Kashmir, also plays a role in this conflict. In 1962, China occupied a part of India that borders Kashmir — and entered into an alliance with Pakistan. Today, China and Pakistan trade via the newly constructed Karakoram Highway, which connects the countries via the western Kashmir region. As part of the multibillion-dollar China-Pakistan Economic Corridor (CPEC) project, that corridor is being expanded.

This former gravel road is currently being developed into a multi-lane asphalt highway that can be used all year long. China is investing $57 billion (€51 billion) in Pakistani infrastructure and energy projects, more than in any other South Asian country. The economic alliance with its powerful neighbor has helped solidify Pakistan's claims to the Himalayan foothills.

The governments of neighboring states are no longer the only parties to the conflict in Kashmir, however. Using violence, militant groups have been trying to disrupt the status quo on both sides of the LoC since at least the 1980s. Their attacks have contributed to a deterioration of the security situation.

At least 45,000 people have been killed in terrorist attacks over the past 30 years. And the total number of deaths resulting from this conflict is at least 70,000, according to estimates by human rights organizations.