Cut-off Kashmir resorts to primitive communication methods | Asia | An in-depth look at news from across the continent | DW | 12.08.2019

People in India-administered Kashmir are being forced to communicate with notes and human couriers after New Delhi cut the region off from the rest of the world by shutting down internet and telephone services. 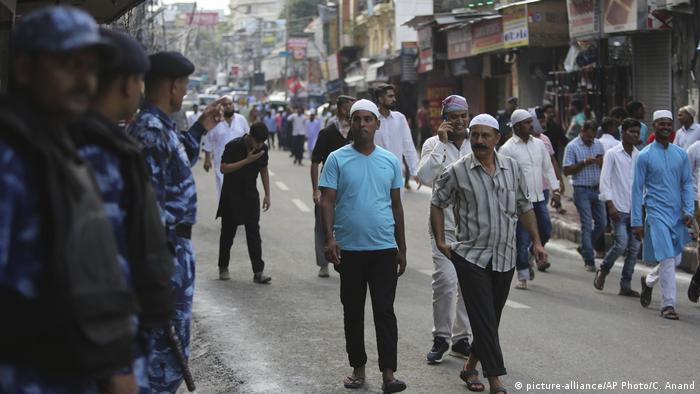 Barricades manned by police and paramilitary officers dot roads across India-administered Kashmir, discouraging residents from going out even for medical reasons. In Srinagar, the capital of the region, spools of concertina wires have been placed next to most roads.

These measures have been taken by the Indian government in an attempt to keep protesters off the streets after New Delhi removed Indian-administered Kashmir's semiautonomous status and placed the region under its direct control.

Use of mobile phones and internet has increased in recent years in Kashmir. During previous security crises, electronic modes of communication were cut off by authorities, and the communication bans were isolated to districts.

However, the current shutdown is on a different scale. Even fixed-line phones have been blocked, and residents are now struggling to get and pass on information. They are anxious about the well-being of the friends and loved ones, many of whom live outside the region. Cut off from the world, some people are reverting to old techniques of passing notes and human couriers. A 50-year-old Srinagar resident told DW that he had received a handwritten note from his daughter, who works in New Delhi, through a human courier. The note was brief: "I am doing fine. Do not worry about me. Take care at home," it said.

Another person left a word of mouth message with a traveler heading in the direction of his home, but remained unsure whether it had arrived.

"My family lives in Shopian [a volatile district on the southern edge of Kashmir valley]. A friend was going home, so I told him to inform my family that I am safe. I don't know whether he has been able to meet them," he said.

People are slowly beginning to get frustrated by the lack of news from friends and family. "If they were planning to starve people to death like this, why did not they just kill all the people here and grab the land," said Shakeel Ahmad, an ambulance driver at the region's main tertiary care hospital, referring to the Indian government.

"For the last 30 years, the world believed that there was terrorism and believed all the narratives that India built. It was all a lie. Is the world blind, now that people are starving? Where are the human rights groups? Where is the UN? We have lost faith in all of them," he added.

Even hospitals are cut off

Ambulance drivers in Srinagar said they were making fewer trips to ferry patients, as few had called due to the shutdown. "If something happens, people cannot inform hospitals. This is a difficult time for everyone," Shabir Ahmad, an ambulance driver for the Department of Health Services in Kashmir, told DW.

Patients were scarce at the Shri Maharaja Hari Singh hospital as well. The hospital treats trauma and emergency patients from across the Kashmir valley but it has hardly seen any visitors in the last days.

"Usually, there would be patients on every bed, but now there are just 10-15 patients in a ward with 40 beds," Hilal Ahmad, a helper at the hospital, told DW.

Another resident, 35-year-old Muhammad Shakir, said he had no idea that his uncle had been hurt in an accident. He heard about the incident three days later from another family member.

"It is really heartbreaking that it took me three days to know that my uncle was injured and underwent surgery, and I did not know," he said. "If a father dies today, a son will not come to know."

Several patients who had been discharged after treatment waited on the pavement outside the emergency ward with no means of going back home. Fayaz Ahmad, a resident of Kupwara, at the India-Pakistan border, was stranded at the hospital with his wife, who had just delivered a baby girl.

"We do not have anyone else here with us and our family back home has no information about what happened. We are not even able to go back and inform them," he said.

The blockade has particularly hit journalists, who are unable to file stories. News outlets have been unable to source information from any part of the region. "When they hear the word 'journalist,' they [security forces manning barricades] get rash. They want to beat you," a reporter working with an Indian newspaper, told DW.

"We have stopped going out. We fear for our lives. I was told by [security] forces on the road that journalists were not allowed to move. This country cannot call itself a democracy," he added.

A photographer with an international news agency told DW that he went to shoot footage in Srinagar but was told by the forces to go back before his camera was broken. "There is a lot of hostility towards the media now," he said. "This is the murder of media. We have been stopped from telling the story of people."

A foreign journalist, who had arrived in Kashmir a week ago after receiving permission from India's Foreign Ministry, told DW that police arrived at her hotel in the capital city of Srinagar and told her to leave as soon as possible.

"I was scheduled to stay but they insisted I leave immediately and I was forced to book my ticket and leave on Sunday morning," she said. 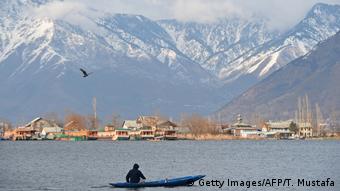 Once a tourist hotspot, Kashmir has suffered the effects of terrorism

No relaxation in sight

Meanwhile. most Kashmiris are observing the Muslim festival of Eid-al-Adha amid a security lockdown and lack of connection with others.

Speaking to DW on condition of anonymity, an official in Kashmir's administration said that his colleagues were "closely monitoring the situation and had yet to decide when the communication will be restored."

The official added that there was an increased likelihood of phone lines being restored, but without prior announcement about when it would be done.

Kashmir has been in a state of lockdown since the beginning of last week,when the Indian government under Prime Minister Narendra Modi decided to abolish Article 370 of the Indian constitution that gave Kashmir, a former kingdom, autonomy over its affairs and a separate constitution.

The Indian government also abolished Article 35A, which differentiated between ethnic Kashmiris and people who settled from elsewhere in India and was aimed at preserving the region's culture and demography. The law prevented settlers from buying property, contesting in elections and availing facilities in educational institutions.

Advocates of the two laws have said that abolishing them could expose the valley to unwanted changes, including damaging its fragile ecology, allowing businessmen from outside the area to invest and expand and creating conflict with indigenous communities.