India-administered Kashmir has remained cut off from the outside world ever since New Delhi decided to end the region's autonomy and imposed a near-total communications blackout. DW managed to speak to some Kashmiris. 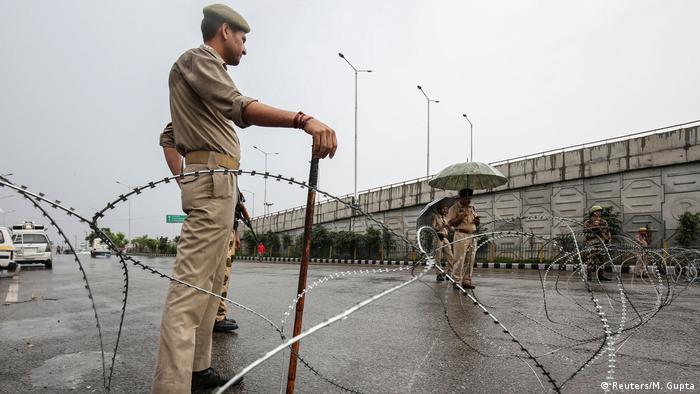 An eerie silence prevails in the Kashmir valley ever since New Delhi announced this week that it was revoking the special constitutional status of India-administered Kashmir — known as Jammu and Kashmir — and imposed an unprecedented security lockdown and near-total communications blackout.

The special status, which Jammu and Kashmir had enjoyed since its accession to India in 1947, allowed the region to have a separate constitution, a state flag and autonomy over the internal administration of the state.

The Indian government also decided to strip Jammu and Kashmir of its statehood and turn it into two territories directly governed by New Delhi.

Indian Prime Minister Narendra Modi said on Thursday that the drastic measures were needed to eliminate separatism and terrorism from Kashmir.

Kashmir is claimed in its entirety by both India and Pakistan, although both countries only control parts of it. Rebels in India-held Kashmir have been fighting Indian rule for decades.

Since the announcement, the region has seen unprecedented curbs. To suppress any unrest, authorities have cut all communications, imposed a curfew and deployed thousands of additional troops to a region which is already one of the most militarized in the world.

The security clampdown has forced most people in the state to remain indoors. Schools, shops and even healthcare centers have remained shuttered. The suspension of communication services, including the internet and landline phones, has made it difficult for information to trickle out of Kashmir.

But over the last few days, DW has managed to speak to some residents of Srinagar city to get a sense of the hardships they're facing on account of the restrictions in place.

All of them say they're worried about the current situation. The communication blackout means that many have been unable to reach their family members to tell them that they're fine.

In the last few days, many complain, the availability of healthcare services has been disrupted, with limited access to ambulances and hospitals.

"Emergency services have taken a hit. It took me two full days to convince security personnel to let my uncle be transported to the hospital for his dialysis. He was in a bad shape," said Rasheed Ahmad, a shopkeeper.

Ahmad pointed out that even doctors and paramedical staff found it increasingly difficult to reach hospitals in the face of sweeping checkpoints, filled with steel barricades and razor wire.

Kashmiris have endured security crackdowns in the past, particularly during mass public uprisings against Indian rule in 2008, 2010 and 2016. However, landline phones have never been cut before.

There's no way to accurately gauge how Kashmiris are feeling about the current situation, said Fayaz Bukhari from Kachdora village in southern Kashmir's Shopian district, which was once labeled the "hotbed of militancy" in the region.

"How can we communicate? It has been a living hell and all we hear are announcements from loudspeakers made by security personnel to stay indoors. This is unreal," Bukhari said.

The security measures have also forced Kashmiris to cancel many planned weddings, say locals. "How can weddings take place in this situation?" asked Ghulam Rasool, a state government official.

"We saw stones and brickbats on a street while buying groceries in the small timeframe that is given to us. What are we to presume? Obviously, there must have been a confrontation, but we know nothing about it," said Basharat Manzar, a pharmacist.

"I heard yesterday that a teenager died when security forces pursued a group of boys on a bridge. One of them jumped into the river Jhelum to get away," Manzar added.

People arriving in Srinagar airport from various parts of India have also found it difficult to leave the airport and get to the city center.

"Getting curfew passes is a nightmare," said Altaf Hussain, a businessman. "Also, we cannot move into the interior parts of the Kashmir valley. It is a no-go area."

On Friday, the region's police chief, Dilbagh Singh, said the strict curfew would be eased for weekly prayers.

But there's no clarity on how long the restrictions on people's movement and communication will last.

And what happens next in Kashmir is also a major question. The prospect of protracted violence in the restive region looms large. "We have already sacrificed ourselves. What is left?" rues Sana Bhatt, a student.

India's decision to revoke Jammu and Kashmir's special status is expected to boost investments in the disputed region. But a volatile security situation and local hostility are likely to keep potential investors at bay. (08.08.2019)