Twenty-seven members from 11 EU countries are expected to travel to the disputed Himalayan region after talks with Modi. They will be the first foreign delegation to enter Kashmir since India revoked its special status. 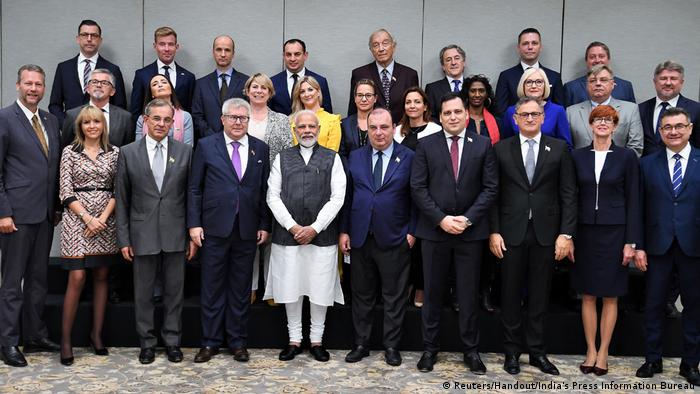 Members of the European Parliament (MEPs) met Indian Prime Minister Narendra Modi in New Delhi on Monday, a day before they're scheduled to become the first international observers to visit the disputed Himalayan territory of Kashmir since India stripped the part under its control of its semi-autonomous status in August, imposing a severe security forces crackdown on protesters in the region.

Modi's government had previously denied access to Kashmir to United Nations special rapporteurs, US congressmen and foreign journalists. The US representatives had expressed concerns over India's block on diplomats and foreign media that prevented them from accessing the region.

"Their visit to Jammu and Kashmir should give the delegation a better understanding of the cultural and religious diversity of the region of Jammu, Kashmir and Ladakh," Modi said. Modi told the MEPs that the visit would provide them with a clear view of Kashmir's development priorities.

An Indian delegate from the EU said the trip was not official; it was being made in a personal capacity by 27 EU lawmakers from 11 countries. They are expected to fly to Kashmir on Tuesday and meet with government officials and residents to assess the situation.

Detained since August, Jammu and Kashmir Chief Minister Mehbooba Mufti said she hoped the visit signaled the lifting of what she described as an "iron curtain" imposed by India between Kashmir and the rest of the world.

"Hope they get a chance to speak to the people, local media, doctors and civil society members," she tweeted.

Modi announced that things had begun returning back to normal, saying hundreds of people had been freed from detention or makeshift prisons and phone lines restored.

However, only hours before Modi's EU meeting, a grenade attack in the town of Sopore in northern Kashmir injured at least 17 people, a fresh reminder of the volatility of the area. It was the second grenade attack in three days after six members of India's security forces were injured in Srinagar.

Internet services have also remained suspended to prevent the organization of street demonstrations after months of unrest.

Kashmir is divided in large part between India and Pakistan; both countries lay claim to the territory in full. For almost 30 years, militants in Indian-administered Kashmir have been fighting either for Kashmiri independence or to become part of Pakistan, in a conflict that has claimed more than 50,000 lives.

The armies of India and Pakistan have blamed each other for the deaths and for violating a cease-fire. Protesters in Pakistan have marched with a large Kashmiri flag, as the region remains under Indian restrictions. (20.10.2019)