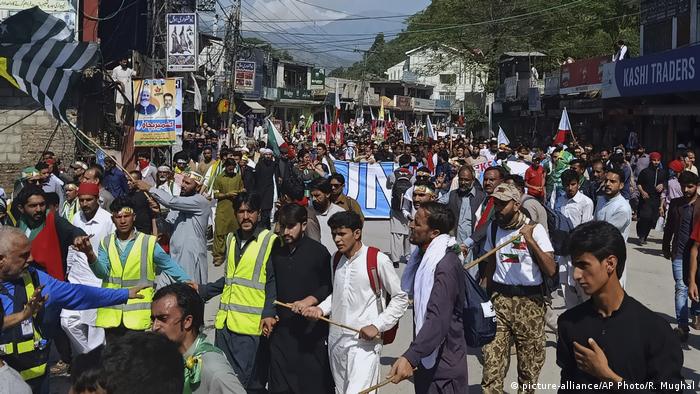 Police on the Pakistani side of Kashmir have stopped thousands of protesters from reaching the highly militarized Line of Control (LoC) that divides Indian- and Pakistan-controlled Kashmir regions.

Pakistani authorities have placed shipping containers on the road and beefed up security near Jaskool, some 8 kilometers (5 miles) from the India-Pakistan Kashmir border. Protesters have staged a sit-in and are demanding that the government remove the blockade.

The demonstrators are protesting against the Indian government's decision to abrogate Jammu and Kashmir's special status on August 5.

The "Freedom March," which began on Friday, was organized by the Jammu and Kashmir Liberation Front (JKLF), which wants the entire Kashmir region to be independent of both India and Pakistan. New Delhi accuses the JKLF of receiving funds from Pakistan and has arrested several of its leaders in its part of Kashmir.

Pakistan and India both rule part of the disputed Himalayan territory of Kashmir but claim it in full. The restive region is a flashpoint between the nuclear-armed archrivals. China, too, has some territorial claims in the area.

'Make it a demilitarized zone'

"But anyone crossing the LoC from AJK to provide humanitarian aid or support for Kashmiri struggle will play into the hands of the Indian narrative that tries to divert from the indigenous Kashmiris' struggle against brutal Indian occupation by trying to label it as 'Islamic terrorism' being driven by Pakistan," Khan added.

Toqeer Gilani, the president of the JKLF in Pakistan-administered Kashmir, told DW that Khan's call is practically an acceptance of the LoC as a permanent border between India and Pakistan and not a disputed territory.

"At the same time, we demand that both India and Pakistan withdraw troops from their parts of Kashmir and declare it a demilitarized zone. The UN must take over the control after demilitarization and organize a referendum in the coming years," he added.

Gilani accused Islamabad of paying lip service to the plight of the Kashmiri people. "UN resolutions allow Kashmiris on both sides to move across the LoC. But Pakistani authorities have blocked the movement, which is tantamount to accepting it as a permanent border," the JKLF leader told DW on the phone from the rally.

Since August 5, an estimated 4,000 people have been arrested in the Jammu and Kashmir region, according to a report dated September 6, although many people have since been released.

The arrests come as authorities attempt to crack down on protests and unrest in the weeks since the region was stripped of its special status. India's moves have strained ties with Pakistan, which also claims sovereignty over the region.

Furthermore, the Indian-controlled region has experienced frequent communication blackouts since August 5. Pakistan's ambassador to Germany told DW on September 12 that India must end this lockdown in order to restore diplomatic relations with Pakistan and find a solution to the unrest in the area.

Some experts say that Pakistan's direct involvement in the Kashmir conflict began in the late 1980s, after which the somewhat liberal Kashmiri movement took on a more religious outlook. They argue that had Pakistan allowed an indigenous movement to take root in Kashmir, the issue would have gained more international attention.

In the present scenario, Indian PM Modi can easily conceal the human rights violations in Kashmir and intensify crackdowns on protesters in the name of fighting terrorism, they say.

"Pakistan's Kashmir policy is based on double standards and hypocrisy. Islamabad claims it backs Indian-administered Kashmir's right to self-determination but suppresses Kashmiris in its part. The UN considers the entire region — both Indian and Pakistan Kashmirs — disputed," Talat Bhat, director of the Stockholm-based Nordic Kashmir Organization, which lobbies for an independent, secular and united Kashmir, told DW.

Siegfried O. Wolf, director of research at the Brussels-based South Asia Democratic Forum (SADF), said the involvement of Pakistan in the Kashmir conflict will always complicate the issue, as Islamabad's international reputation as an alleged Islamist hub is counterproductive for dealing with the plight of the Kashmiris.

"One of Pakistan's foreign policy goals is to weaken India," he told DW. "By encouraging militants in Kashmir, Pakistan has pushed India toward the present situation," he added.

"Pakistani authorities believe that if India gets militarily involved in the Kashmir conflict, it will have a negative impact on India's economic growth and international repute. Also, India's rights violations in Kashmir help the Pakistani military to justify its dominance inside Pakistan," Wolf said.

Islamabad denies it supports any militant group in India-administered Kashmir and insists its backing for Kashmiris is merely diplomatic and political.

New Delhi's imposition of severe restrictions on people's movement and communication in India-administered Kashmir has strengthened separatist tendencies in the region. Rifat Fareed reports from Pulwama. (10.09.2019)