People in India-administered Kashmir have been living with roadblocks, lockdowns and no communications for two weeks. DW reporter Rifat Fareed tells the story of life in Srinagar after it was cut off from the world. 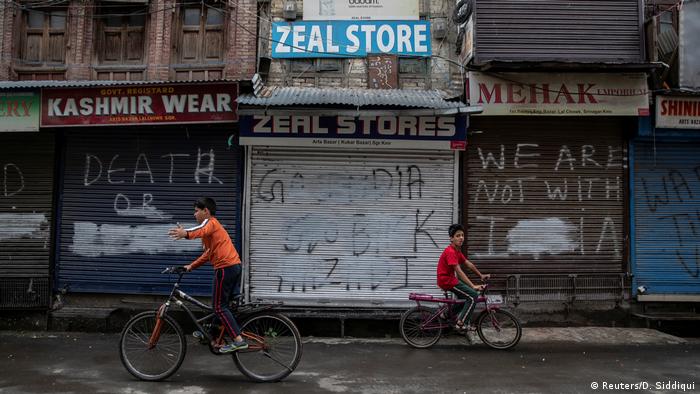 It was around midnight on August 5 when everything went silent in Srinagar, the largest city in Indian-administered Kashmir. The phones stopped ringing and the internet was dead. The streets were quiet.

By daybreak on Monday, all of the roads had been blocked, and paramilitary troops were stationed around the city. Srinagar was locked down.

I have been working as a journalist for seven years, but as these events unfolded, there was an overwhelming sense of shock.

When I left home that morning at 7 a.m. it was still unclear what was happening. There was no way to confirm why the city has been put under siege. An eerie calm had enveloped Srinagar as I negotiated a series of checkpoints to get to the office.

I decided to go to a major trauma care hospital to check if anything was happening. I waited for two hours. There was no rush of patients, and nothing exceptional happened, but there was still confusion. People were unable to comprehend what was going on.

By the time I reached my office, Indian Home Minister Amit Shah had made the announcement abrogating the seven-decade-old Article 370, which had granted semi-autonomy to the Muslim-majority region. Kashmiris protest in Srinagar after Friday prayers on August 16

After the decision was announced, the Indian government was worried that protests and demonstrations would break out, like what had happened in 2008, 2010 and 2016. Indian authorities deployed paramilitary forces and evacuated thousands of tourists and Hindu pilgrims. In Srinagar, a siege was implemented, as razor wires blocked roads and all lines of communication were cut.

The Indian government's decision to abrogate Article 370 of the Indian constitution also stoked fears among Kashmiris that the move would be followed by major attempts to change the region's demography. Indian-administered Kashmir is the only Muslim-majority region in India.

The silence in Srinagar continues, as phone lines and internet access have mostly remained cut off. People living in Indian-administered Kashmir are isolated from the world and from each other. They wait for news of friends and relatives.

Not for the faint of heart

At my home in Srinagar, my father and mother were already feeling the pressure during the first day of the siege.

We had stockpiled essential supplies, but they were worried if anything was missing. They double-checked the medicines, the food and the milk. The city was eerily quiet the first night.

The next day, August 7, I decided to again go out and see the city. All communication was suspended and there was no way to send news reports.

I was again stopped at roadblocks and asked questions: "Where do you want to go?" I would answer with caution and then the paramilitary troops would pause and decide.

There were roadblocks every few hundred meters in Srinagar. Lal Chowk, the historic square in Srinagar where India's first prime minister, Jawahar Lal Nehrum, promised a plebiscite to the Kashmiri people, remained sealed off.

Moving around was risky. And in case of emergency, there was no way to call emergency numbers or contact family members.

I headed towards the Maharaja Hari Singh Hospital, which is named after Kashmir's last Hindu king who acceded the region to India in 1947.

A young man who had been injured in a road accident was being carried on a stretcher. His condition was critical, and there was no way to contact his family.

The ambulance driver said the man had been hit by a truck while riding his bike, and that no one had picked him up from the side of the road.

I left the hospital feeling emotional. A woman who was discharged from the hospital was waiting for a ride home. She kept her hand on my shoulder and said: "your heart seems to be weak like mine."

Over my career, I have worked on many stories that I felt were very difficult to deal with emotionally. For example, last month I reported about three men who were found innocent and released from prison after 23 years of incarceration. Their story was heart-wrenching, but it is hard to compare anything to the desperation of the people in Kashmir.

I left the hospital anxious, because there was no way to report the details of these people who were facing immense hardship. I felt that I was failing as a journalist.

On August 11, the seventh day of the siege, I was again traveling around Srinagar when I saw a woman lying on the side of the road. She had fallen unconscious and had hurt her head. There was no one around to take her to hospital.

I decided to take her to the hospital. "I was searching for some shop to be open so I could buy some food for my children," she told me. It was the eve of Eid, a major Muslim holiday.

"I am a widow. My children had told me not to go, but I promised to be back in an hour. Now there is no way to tell them that it will take more time," she said.

Eid during a siege

On August 12, I visited the airport in Srinagar. It was the day of Eid and there were more roadblocks than usual on the way to airport, with more barbed wire set up everywhere.

After I returned home, a neighbor stopped and greeted me with the customary Eid greeting. I was taken aback, as for a moment, I had forgotten it was Eid.

My 9-year-old niece and my two nephews, who are 3 and 5 years old, had no new clothes to wear. We prepared no delicacies or cuisines at home. The children wanted to visit a garden and play with other kids, but they were not allowed as a lockdown was in place.

Many days have passed since August 5, when the siege began in Kashmir. The people have lost count of the days. Indeed, many people no longer recall which day it is. It makes no difference now.