In his speech to the UN, Pakistani PM Imran Khan has warned of a "bloodbath" in Kashmir and warned that war was possible over India's actions in the region. 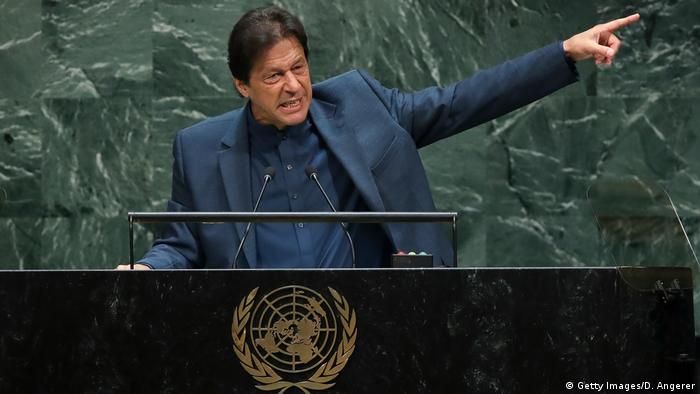 In his speech to the UN General Assembly on Friday, Pakistan's Prime Minister Imran Khan said Indian forces in Kashmir would turn their weapons on Kashmiris when the current curfew in place is lifted.

"There are 900,000 troops there, they haven't come, as Narendra Modi says, for the prosperity of Kashmir," said Khan, adding that when people are allowed again into the streets, the soldiers will "shoot them."

"Women, children, sick people are locked in like animals ... there will be a bloodbath when the curfew is lifted," Khan said.

The Indian-controlled part of Kashmir has been under lockdown since early August after New Delhi scrapped the region's semi-autonomous status. Since then, India has sent more troops to the region, cut off all communications and arrested thousands of people.

Some of the curbs have since been eased, although many prominent detainees remain in jail, and mobile and internet communications remain cut off.

Indian Prime Minister Narendra Modi addressed the General Assembly prior to Khan and said India was "a voice against terrorism" around the world. Modi did not specifically mention Kashmir during his speech.

Khan also addressed the possibility of war between nuclear-armed Pakistan and India over New Delhi's aggressive actions in Kashmir.

"If a conventional war starts between the two countries, anything could happen. But supposing a country seven times smaller than its neighbor is faced with the choice: Either you surrender, or you fight for your freedom till death?" Khan said.

India and Pakistan have fought two of their three wars over Kashmir.