Over the years, thousands of Kashmiri men have disappeared after they were forcibly taken away, mostly by Indian forces. Parveena Ahanger, whose son went missing, is spearheading a movement to find lost family members. In the early 1990s, Ahanger's life was like any other ordinary mother in Srinagar, the capital of Indian-administered Kashmir, until her eldest son Javaid, a teenager in high school, was picked up by Indian-armed forces from their home. Ahanger never saw her son again.

Javaid Ahanger is just one of thousands of young men who were forcibly taken away by Indian forces, and in some cases, by unknown gunmen. To this day, many families do not know what happened to their disappeared relatives. Government officials allege these men crossed over to Pakistan to train with separatist militants, but Kashmiri families deny this accusation, choosing instead to look for their lost sons.

For the last 30 years, Ahanger has been trying to trace her boy. "I went to police stations, I traveled to army camps, I went to forests, villages and everywhere I could reach," she told DW, adding, "my longing for my son made me go to places I never imagined going to. I would leave home early in the morning without food."

Ahanger's suffering prompted her to look for other parents whose children were lost. "In the search for my son, I found I wasn't alone. In the early 1990s, there were often advertisements in Urdu newspapers where people wrote about their disappeared children. I used to collect these [newspaper] cuttings and locate their villages."

As the years passed by, more and more families whose sons were forcibly taken away joined Ahanger in their search, and in 1994, the Association of Parents of Disappeared Persons (APDP) was born. The APDP estimates the number of disappeared persons to be around 8,000. According to the organization, "a majority of those disappeared are young men, including minors. Others include people of all ages, professions and backgrounds, many of whom have no connection with the armed opposition groups operating in Kashmir."

According to Ahanger, many mothers have died in their quest to find their missing children. 'Enforced disappearances' — as these cases are locally known — are more painful than death, she says. "When someone dies, he has a grave. His family sees his dead body, touches his face. At least there is emotional closure. But when your child is taken away and disappears, you don't know what to do. You struggle between longing and hope. You don't know where he is, what he is doing, or what happened to him. There is so much trauma, and so many storms rage inside you." 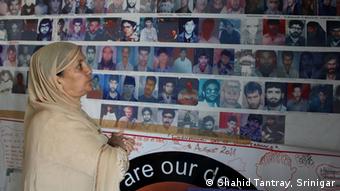 Ahanger's mission is now to look for missing children and family members. "These women, mothers, wives whose children [and] husbands have been subjected to enforced disappearances are my family. I have made a promise to them that I will fight on their behalf ... We are nothing more than a family of victims together who continue to wait," she tells DW.

Fighting to the end

Ahanger's fight for the return of missing relatives has been unsuccessful so far. Until 2007, she fought a legal battle but justice was elusive. According to her, thousands of such cases are pending in the courts without any conclusion.

"The legal system, the judiciary and the courts, gave victims like me no justice. We are not fighting only for our children but also to ensure that no one else meets the same fate," she says, adding, "we ask the government, where have our children vanished [to]? We want them to investigate our cases."

Read more: A year of lockdown and lost autonomy

Until the beginning of last year, Ahanger along with the mothers, wives, fathers and children of the victims of enforced disappearances gathered at a public park in the commercial hub of Srinagar for a peaceful protest, holding banners with pictures of their disappeared kin. But public gatherings have been difficult after the Indian government revoked Article 370

of the constitution, effectively withdrawing Kashmir's autonomous status, and implementing a strict lockdown. Many leaders and public figures were subjected to house arrests. This year, the COVID-19 pandemic brought everything to a halt and in October, government officials raided Ahanger's office, accusing her of separatist activities.

Regardless, Ahanger is determined to keep fighting as long as she is alive. "Nothing can frighten me and no amount of fear can halt our journey," she says.

Ahanger was nominated for the Nobel Peace Prize in 2007 and received the Rafto Prize for Human Rights in 2017.

A day after Pakistan marked its independence, its twin India also celebrated its freedom from British rule. Tensions between the two, however, are running high and ties continue to be scarred by mutual suspicion.