Masrat Zahra: Presenting women′s perspective of the Kashmir conflict | Asia | An in-depth look at news from across the continent | DW | 12.06.2020

The Kashmir-based reporter told DW that the conflict in the region has always been told from a man's viewpoint. This year's winner of the Anja Niedringhaus Courage in Photojournalism Award wants to show a different side.

The International Women's Media Foundation (IWMF) on Thursday named Masrat Zahra as the winner of this year's Anja Niedringhaus Courage in Photojournalism Award. The Kashmir-based freelance photojournalist's images depicting conflict in the Indian-controlled region and its toll on local communities were praised by the jury for their "humanity" and her particular focus on the stories of women.

Zahra, who was born in the city of Srinagar, provides an emotional insight into daily life inside India-administered Kashmir with her photographs, which the jury described as filled with a sense of "dread and community."

The award honors the memory of German photojournalist Anja Niedringhaus, who was killed in 2014 in Afghanistan.

"Countless communities around the world are facing enormous threat, harm and censorship due to governmental threats and the declining state of press freedom worldwide," said IWMF Executive Director Elisa Lees Munoz. "During these times, Anja's legacy reminds us that it's the communities beneath the headlines who are the true targets of civil and social brutality."

India and Pakistan each rule part of the disputed Himalayan territory but claim it in full. Both oppose the demand for an independent, undivided Kashmir ruled by the Kashmiri people.

In an exclusive interview with the DW in Srinagar, Zahra said that she wants to keep telling the "untold stories" from Kashmir.

DW: What does the Anja Niedringhaus Courage in Photojournalism Award mean to you?

Masrat Zahra: I think the award recognizes the work of the entire journalistic community of Kashmir. Journalism is going through a difficult phase in the region.

The timing of this award is important because it is an acknowledgment of the work of all Kashmiri journalists who are informing the world about the situation in the region despite difficult circumstances. 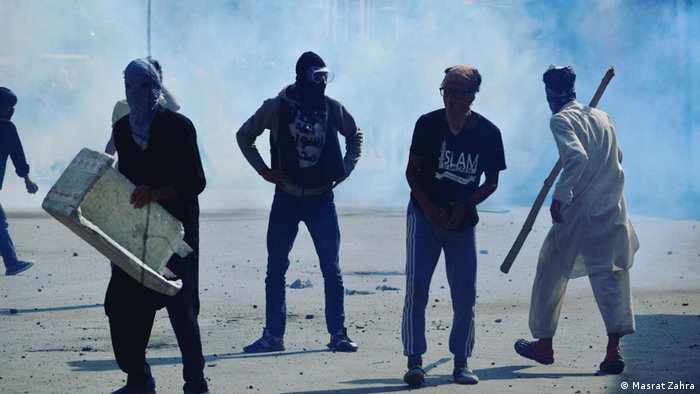 Masrat Zahra captures Kashmir protests in one of her photos

Why did you choose the profession of photojournalism? What was your motivation?

I chose this profession to tell stories of women. I wanted to present the women's perspective of the Kashmir conflict. Since I was a child, I have been seeing protests and clashes in Kashmir. I also saw that only men were reporting them. I always wanted to be a photojournalist and believed that we need female photographers who can tell stories in a different way.

How did you react after you were booked under an anti-terror law in April?

I was booked under a draconian law for my work. At the time, I was not fully aware what the law entailed. I could have been imprisoned for seven years. I was surrounded by uncertainty and fear but I also received overwhelming support from local and international journalists. They all stood by me.

My family also supported me. I think they had finally started to accept my work and understood the challenges that came with it.

I am afraid sometimes, but I will not stop working. Journalists like Anja Niedringhaus also had their families, but they chose to work in high-risk areas to tell the stories of communities that were suffering silently. Had journalists like Niedringhaus not told these stories, these people might never have been seen or heard. There are thousands of photographers like me facing multiple challenges to tell their stories. 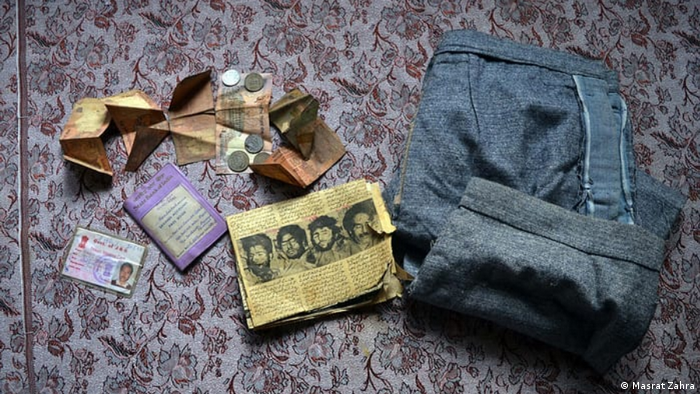 Zahra: 'Journalism is going through a difficult phase in Kashmir'

How difficult is it to be a female photojournalist in Kashmir?

My mother was worried for my safety. She thought I might not be able to deal with risky situations. Sometimes I had to leave home in wee hours to cover funerals or get home very late in the evening after covering protests. Many people discouraged me but I had many supporters as well.

It was not easy. Kashmir is a heavily militarized place and journalists are often summoned by police. My family was concerned about me.

In 2018, I was trolled on social media after a picture of my reporting a gunfight involving armed forces went viral. People on social media alleged that I worked for the army. The allegations disturbed me. These kinds of things make it more challenging to work in a conflict zone.

Masrat Zahra is a freelance photojournalist based in India-administered Kashmir. She won the 2020 Anja Niedringhaus Courage in Photojournalism award from International Women's Media Foundation.

The interview was conducted by Hibah Bhat in Srinagar, India-administered Kashmir.

US photographer Stephanie Sinclair gives young, vulnerable women a voice. She tells DW what motivates her to risk her life and why the US bears a special responsibility when it comes to defending women's rights. (08.06.2017)