What Berlin can learn from Germany′s cycling metropolis Münster | Germany | News and in-depth reporting from Berlin and beyond | DW | 18.08.2018

What Berlin can learn from Germany's cycling metropolis Münster

Berlin may be the biggest, hippest city in Germany, but where cycling is concerned, the much smaller university city of Münster is the real metropolis. DW's Jefferson Chase went there to pick up tips on ecomobility.

Earlier this summer, Berlin passed an ambitious mobility law that will see the German capital invest €51 million ($58 million) annually in cycling infrastructure in the coming years. By 2025, the city aims to convince residents and visitors to make one-third of all journeys by bike. And by 2050, Berlin's wants its transportation to be climate-neutral.

Lofty goals. But the project has gotten off to a less than auspicious start. Berlin scored an unintentional social-media hit recently with a bike path featuring unmanageable right angles that reminded many people of the video game Tetris. And cycling activists say that the city isn't ready to get started.

"We're not prepared for what's coming and what should have been done over the years in parallel," Dirk Schneidemesser from the lobby group Changing Cities told DW. "We lack the infrastructure needed to create the infrastructure."

Schneidemesser says that Berlin won't be able to spend the €51 million allocated for 2018 by the end of this year. He adds that the German capital will have to "look for help," naming Copenhagen and Amsterdam as two cities that are much more advanced than Berlin in promoting urban cycling.

But there are lessons to be learned a bit closer to home, especially in Münster, which in 2018 was once again voted Germany's best big city for cycling. I headed there to check out the situation.

Münster: Twice as many bikes as bikers

In Münster, getting around well by bike begins at the train station, which features a basement parking facility with space for more than 3,500 two-wheelers. There are bikes for hire to non-regulars, and even a repair shop should anyone get a flat tire or rip a brake cable.

I'm met there by Andreas Pott from the city's transport department. He tells me that one key to encouraging people to convert to pedal power is to integrate cycling with buses and trains, so that commuters can cover longer distances. And to make it cheap. 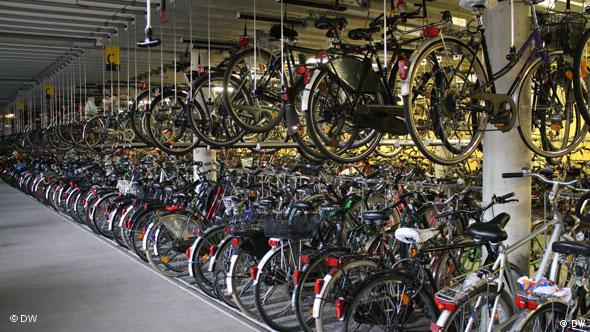 "Cycling is clearly the cheapest transport option," Pott tells me. "Münster residents pay more for buses and trains and a lot more for cars. City administrators are overjoyed at every single individual who decides to cycle."

Convenience paired with price advantages have won the city over. Münster is home to just 300,000 people, but it boasts 600,000 bicycles. People have different bikes for different purposes, like shopping around the corner versus visiting friends or clients across town. Pott himself has three bikes.

He hooks me up with a rental, and after a bit of fiddling with the seat height, we're off for a tour of the city that year in year out is named by Germany's leading cycling organization the most bike-friendly place in the country – the same survey in which Berlin ranks fourth-from-bottom.

Cars versus bikes - everyone wins

The first thing you notice about cycling in Münster compared with Berlin is how wide the bike lanes are: 1.5 meters is considered the minimum width for a cycle path, and while in Berlin city planners seem to be 'creative,' in Münster they stick to the guidelines.

Indeed, wherever possible, bicycles and cars are kept completely separate, and at major intersections there are lights ensuring that bikers don't have to compete with drivers for space while turning. There were only two cycling-related fatalities in Münster last year, and they were down to cyclists trying to pedal home after having a bit too much to drink.

So do drivers resent all the TLC bestowed upon two-wheelers? Potts says no. First of all, because cycling saves money – according to estimates from Denmark building roads costs six times what it takes to construct cycle paths. Moreover, because bikes are relatively small in size, they free up a lot of space on roads.

Awareness is also a major component of Münster's transportation strategy. Potts tells me that the city devotes about one-third of its budget to educating people about the needs of cyclists and the benefit of encouraging bike travel. More people on bikes means more space for cars. Drivers and bikers are no longer antipodes.

"Of course, everyone goes from role to role," Pott says. "I use a car, and when I do, I see things from the driver's perspective. And of course, I see the odd thing that irritates me. But on the whole the vast majority of drivers are happy."

Cycling feeds back into the local economy in the form of tourism and bicycle construction and service. And the costs of maintaining a top cycling infrastructure are modest, €2.50 per year per model.

Learning from its neighbors

City administrators and cycling activists in the capital point out that with its 3.7 million inhabitants, Berlin faces a stiffer challenge. And without doubt, providing for cyclists' needs in a medium-sized university town is easier than expanding the existing 600 kilometers of bike paths into a comprehensive cycling network to serve Germany's biggest city.

But perhaps the most important lesson to be learned from Münster is the value of copying what works from other cities. Back in 1950s, Münster looked to a neighbor for inspiration. 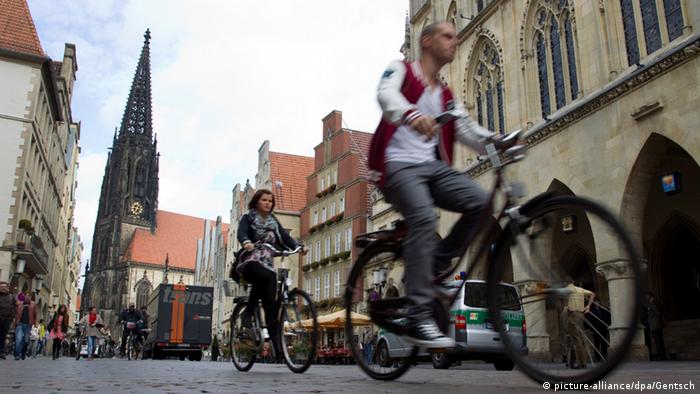 Cycling is the future of urban transport

"Münster is pretty close to the Netherlands, so the bicycle kind of made its way here," Pott says. "Münster has an old city center with narrow streets, so a lot people here began riding bikes because they could get into the old town with them."

Today, some 35 percent of all trips in Münster are made by bike – the sort of figure otherwise only associated with places in Holland or Denmark. In Berlin, the proportion of cycle travel is much closer to the German average of 10 percent.

The cobblestone streets of Münster's old town may seem a world away from the congested north-south and east-west thoroughfares of rapidly growing, cosmopolitan Berlin, but the basic principle of encouraging ecomobility remain the same: to get a maximum number of people from A to B safely while using a minimum of space and creating a minimum of pollution.

Pott says that he and the other city planners in Munich are more than happy to share their know-how, but in Berlin, Schneidemesser sounds a pessimistic note, expressing his fears that any real improvements to cycling could be years away.

So, perhaps, a few well-targeted fact-finding missions to Münster and other bike-friendly smaller cities like Bremen in the north, Freiburg in the southwest and Greifswald in the northeast, would help Berlin's ambitious cycling infrastructure overcome a sputtering start.

The 44-year-old former Tour de France winner was arrested on charges of assaulting an escort in the German city of Frankfurt. Prosecutors told DW Ullrich was under the influence of "massive amounts of alcohol and drugs." (10.08.2018)