Wannsee Conference: Screenplay for the Holocaust | Germany| News and in-depth reporting from Berlin and beyond | DW | 19.01.2017

Wannsee Conference: Screenplay for the Holocaust

On January 20, 1942, details about the extermination of Europe's Jews were discussed. Even 75 years later, the minutes of the Wannsee Conference send chills down one's spine. 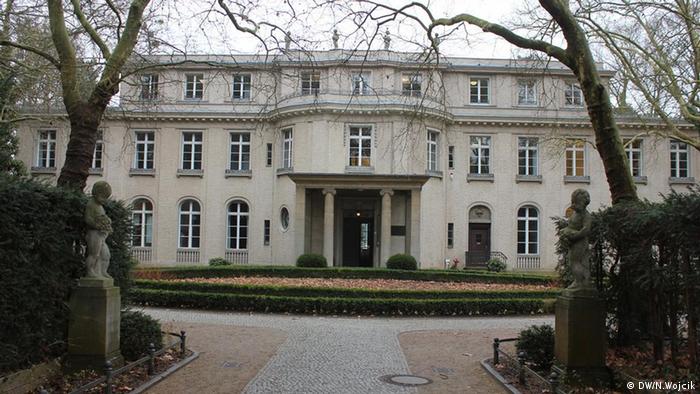 Sometimes coincidences are helpful. In March 1947, while officials from the German foreign ministry had to justify their actions at the Nuremberg Trials, Robert Kempner made a significant discovery. Amid the masses of documents left behind by the Nazis, a cover page piqued the curiosity of the assistant US chief counsel. A stamp in red ink is clearly legible on the page: "Secret Reich Matter." It is followed by 15 pages under the nondescript title "Minutes of Meeting" and serves as evidence of the systematic execution of European Jews. It is a record of the Wannsee Conference that took place on January 20, 1942. It is the 16th set of minutes and the only remaining one of the entire set of 30.

At noon, fifteen men who had accepted an invitation from Reinhard Heydrich, head of the dreaded Reich Main Security Office (RSHA), arrived in a lavish industrialist's villa in the posh Berlin suburb of Wannsee. The temperature outside was minus twelve degrees Celsius and what was discussed within the walls of the villa can still send chills down one's spine today. The guests included SS officers, state secretaries and heads of Nazi administrative authorities. The names were not the most familiar ones, but almost all the men were young and well-educated. Half of them held a doctorate, yet most importantly, every one of them was very ambitious.

For people who do not have a comprehensive knowledge of history, the Wannsee Conference is seen as the committee responsible for the Holocaust, but this is wrong in two ways. Firstly, no decision was made on that day. Secondly, the mass extermination of Jews had already begun. Heydrich brought representatives of all relevant institutions, like the foreign ministry and the transport ministry, to one table to discuss the coordination of the planned deportations and mass murders, and to put all of the participating authorities under his leadership. This is already confirmed in the first sentence of the minutes. Heydrich's appointment as a commissioner for the preparations for the final solution of the Jewish question in Europe took him up a step on his career ladder. 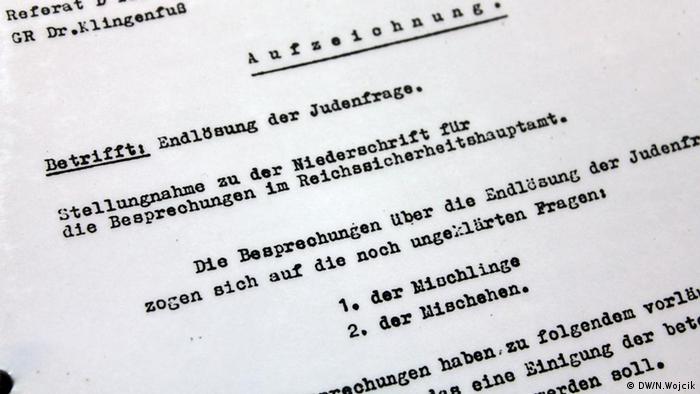 Re: 'The final solution of the Jewish question' - reads the top line of the Wannsee protocol

Half a million Jewish victims before the Wannsee Conference

Contrary to popular belief, the organized mass extermination of Jews did not begin on January 20, 1942. Months before that, hundreds of thousands of Jews had fallen victim to the "Final Solution" of the Jewish question , especially in  parts of the Soviet Union that had been captured by German troops in the summer of 1941. By the time the Wannsee Conference was held, 500,000 Jews – including women and children – had already met their deaths, mostly by firing squad.

The intention to exterminate Jews was signaled long before 1942. On January 30, 1939, Hitler had already used a clearly defined vocabulary in his prophecy of the "destruction of international Jewry" in the event of a war. When the war against the Soviet Union (Operation Barbarossa) began on June, 22, 1941, and large swaths of the huge empire were overrun, millions of non-German Jews within months found themselves living in the realm of Nazi Germany.

The Holocaust expert and historian Michael Wildt calls this a turning point in the extermination policy for Jews. Deporting over eleven million Jews who were documented in the minutes of the Wannsee Conference was no longer possible. "In order to get rid of the Jews, the plans became accordingly more monstrous and gigantic," said Wildt. 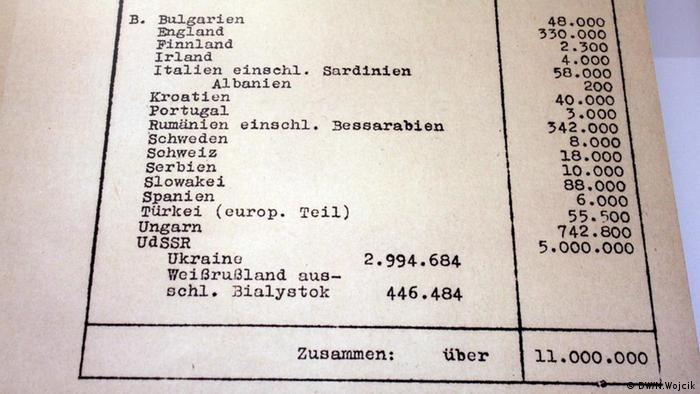 A list of countries with the number of exterminated Jews

The 15-page minutes do not actually provide details of how the world was to get rid of the Jews. The "evacuation to the east" is ambiguous yet clearly expresses what is meant: the extermination of the Jews. Years later, Adolf Eichmann, a leading collaborator of Heydrich and participant of the Wannsee Conference, openly confessed this. During his trial in Jerusalem in 1961, Eichmann recounted what had been discussed in the villa. He said, "Different methods of killing were discussed there."

Even though the only remaining copy of the minutes contains disguised formulations like "accordingly treated" the document is still an exception with regard to the clarity of the intentions, said the historian Peter Longerich. It is evidenced in the fact that the crime of the century enjoyed the support of all conference participants: the SS, justice ministry, interior ministry, foreign ministry, the arms industry and of course, the National Socialist Party. And still, even after 1945, high-ranking Nazis had the audacity to claim that they hadn't known anything - including leading Nazi party members like Hermann Göring or Alfred Rosenberg, a significant Nazi ideologue and minister for the occupied eastern territories.

Apart from the extermination of the Jews, Reinhard Heydrich was pursuing yet another plan only a few months before he himself was assassinated. If the Soviet Union were defeated, the high-ranking Nazis wanted to employ masses of Jews as road workers. "Although undoubtedly a large part will have diminished due to natural decline," is written on page seven of the minutes. Whatever was left of the "remains" would have to be "treated accordingly."

Adolf Hitler's Nazi government had already started its genocide before 1942. But the Wannsee Conference officially marked the start of the systematic extermination of European Jews on January 20, 1942 - 75 years ago. (17.01.2017)