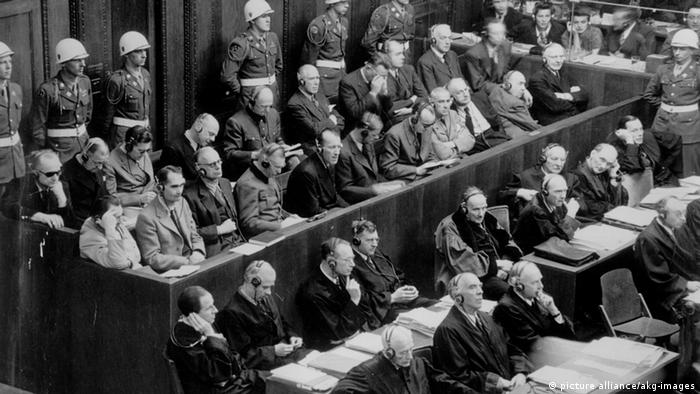 The defendants at the Nuremberg Trials

In the middle of a city that had officially been categorized as "90-percent dead" a few months before, 21 men filed into the Nuremberg Palace of Justice on November 24, 1945, to be tried for crimes that had never existed before.

The men, a cross-section of what was left of the Nazi leadership, had spent the last few months imprisoned in a castle in Luxembourg, mostly bored and left in the dark about what was going to happen to them.

Depending on their dispositions, the men had either been expecting instant execution or were offended to have been arrested in the first place. The alpha-male among them was Hermann Göring, former chancellor of the Reichstag, former head of the German air force, former designated successor to Adolf Hitler. Göring held a press conference in July at which he was asked if he knew that he was on the war criminals' list. "No," he answered. "That question surprises me very much for I cannot imagine why I should be."

Göring knew nothing of the vast, complex trial that he was about to be part of - a trial whose principles, procedures, charges and punishments had to be constructed from scratch - much like the electricity, water, and sewage systems in the country the Allies were now trying to administer. Like many other things in 1945, this had never been done before. 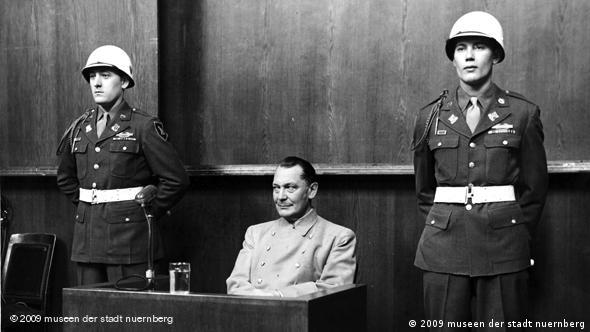 Göring became the de facto leader among the defendants

It's difficult to underestimate the visionary importance of the Nuremberg Trials and the London Charter that it was founded on, according to Lauri Mälksoo, a professor of international law at the University of Tartu in Estonia.

"Nothing else has been as important in that field," he told DW. "Its impact on defining main international crimes - in a way inventing the crime against humanity - was huge."

The London Charter was hashed out in six exhausting, chaotic weeks around a square table in London in the aftermath of the Allied victory - as Ann and John Tusa noted in their detailed 2010 account "The Nuremberg Trial," the conference table had to be square to accommodate an equal delegation from each of the four Allied powers.

The British hosted and chaired the sessions, but there was no doubt which of the four powers was driving the plan - a trial for the leading Nazis had always been the United States' idea. The European Allies had leant towards more straightforward punishment with Soviet Premier Joseph Stalin during a boozy interlude at the Tehran Conference in 1943 reportedly suggesting rounding up the top 50,000 Nazis and shooting them.

To the United States, in the shape of the idealistic Justice Robert H. Jackson, establishing a court for the era's most atrocious criminals was a historic opportunity. "It is high time we act on the judicial principle that aggressive war-making is illegal and criminal," he wrote in a progress report to President Harry Truman as he prepared for the London conference. 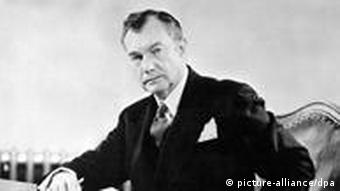 But as the weeks in London wore on, Jackson found himself bogged down in legal wrangling over procedure - most of which came down to the differences between the "Common Law" tradition, practiced in the US and the UK, and "Continental Law," practiced in Russia and France as well as Germany. Should the indictments be delivered in outline first by the prosecution and then evidence be presented during the trial, as in Common Law, or should the full indictment with all the prosecution's evidence, be prepared beforehand by a separate body, and then made available to both prosecution and defense, as in Continental Law? Should judges be allowed to intervene and direct the trial, as in Continental Law, or should the opposing attorneys determine proceedings with adversarial cross-examination of defendants and witnesses, as in Common Law?

The arguments might seem niggling compared to the crimes they would later be addressing, but the rows illustrated a deepening suspicion between the two sides in London that reflected the nascent paranoia of the Cold War.

Jackson, who was to become a chief prosecutor at Nuremberg, and his Russian counterpart, General Iona Nikitchenko, who was to be a judge, were frequently caught in legalistic misunderstandings that escalated into rows as both sides read malicious intentions in the other. But, as Mälksoo put it, "Where there is a will, there is a way. Yes - you can call it an achievement that the two main legal traditions managed to come to an agreement in a thing where disagreements could have been most apparent." 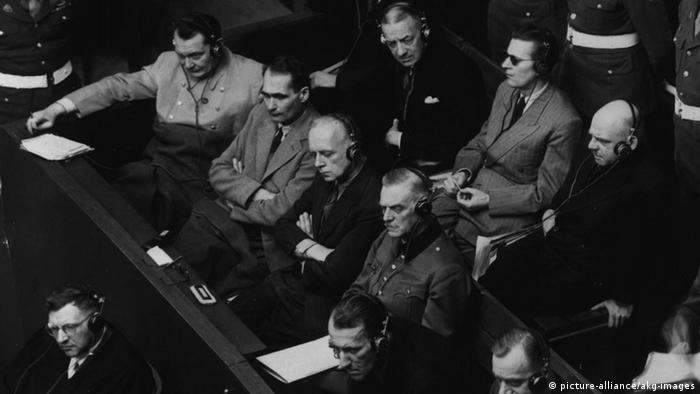 Rudolf Hess (second from left) committed suicide in prison in Spandau in 1987, aged 93

The London Charter culminated in the framing of four new charges against the 22 Nazi defendants - crimes against peace, planning a war of aggression, war crimes and crimes against humanity. While these seemed comprehensive, they lacked two key principles that Jackson had hoped to enshrine in statue for the ages: firstly, the definition of war itself as a universal crime, and secondly, that the principles of Nuremberg should eventually be applicable to all sides. Despite Jackson's dream, Nuremberg remained strictly a military tribunal specifically to try the Nazi regime.

The realization of these two principles was cut off by embarrassing facts - most obviously, it would be difficult to define aggressive war when the Soviet Union had been Hitler's ally until 1941 and had helped to invade Poland.

Then, as today, international criminal law is never free of politics. Just as the principles of the London Charter have passed directly into the International Criminal Court in The Hague, so have its flaws.

"One of the criticisms of the ICC is that to expect it would ever deal with US or Russian war crimes is rather unrealistic because of the status of these states in the UN Security Council and the international order," said Mälksoo. "The problem remains: does it bind the big guys as well? Technically not really."

Common humanity as a legal principle

Yet, despite its inability to exclude messy political realities, the potency of the charter signed in 1945 is undeniable.

"The London Charter was a huge cultural advance," German legal historian Ingo Müller said. "In the last five or six years, the Nuremberg trials have been recognized more and more in Germany, and the more that Germany has promoted the ICC, the more they recognize the principles of Nuremberg."

It is easy to forget, Müller added, that Germany was not always so ready to accept what the charter represented.

"There was real agitation in Germany, especially among jurists, against the Nuremberg trials," he told DW. "The German judiciary did not recognize any of these convictions, and when the old Nazis were released, none of them officially had a criminal record - so, of course, they all got their military pensions - including back payments."

That is why Müller, author of "Hitler's Justice," a seminal work on corruption in the post-war German judiciary, said he remains optimistic about the power of the crimes laid out by the London Charter and applied in the Nuremberg Trials.

"The lesson of Nuremberg was that international law can be enforced," he said. "Of course, the weakness of the ICC is that the most powerful - the US, China - haven't signed. But I think it has affected our global consciousness, and still does."

Streets all over Germany are still today named after Field Marshal Paul Hindenburg, the president who paved the way for Hitler's rise. Some cities took the name off their maps, others quite deliberately didn't. (30.07.2015)

A couple responsible for bringing several Nazi criminals to justice has been awarded Germany's Federal Order of Merit. Beate and Serge Klarsfeld warned of renewed anti-Semitism during the prize ceremony. (20.07.2015)