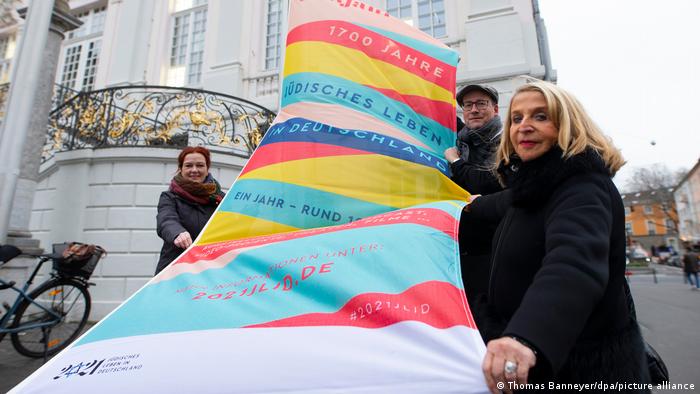 Hoisting the festival flag in Bonn

DW: The commemorative year celebrating "1,700 years of Jewish life in Germany" is coming to an end – although festivities will be extended to summer 2022 because of COVID. It has been a turbulent year with the conflict in the Middle East, attacks on synagogues, increasing antisemitism and the pandemic. Were you able to celebrate at all?

We have been facing challenges ever since we began planning for the commemorative year in the summer of 2019. We named the commemorative year as such because we wanted to celebrate the existence of Jewish life in Germany despite increasing antisemitism nowadays, and also because of the changing history and the Shoah. This resilience needs to be celebrated together with our project partners.

Around 1,000 sponsored and independent project partners participated all over Germany. Until today, over 2,200 events have been organized. New networks and alliances have been built, as can be seen, for example, in the over 40 independent thematic sites on the 1,700 years of Jewish life in Germany, which we have included on our website.

They show that the German states, media groups and institutions are participating with their own formats in this festive year. 30 cities from 13 states participated, including 23 Jewish communities. I see that as a success, because we managed to celebrate despite the many hurdles that were presented to us.

What were your highlights?

Among the many landmark events, one of the high points for me was when a senior member of a Jewish community said that for the first time in 76 years, her community had the courage to exhibit Jewish life in public, and that too, together with new, non-Jewish partners. That was a first, albeit small step. I think that needs to be established more sustainably. 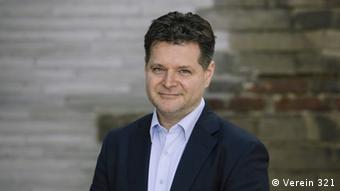 What also fascinated me was the interest shown by the foreign press, people from other European countries, and globally. The Foreign Ministry was also involved. More than 20 events were held in diplomatic missions of Germany around the world as part of the festival.

It was overwhelming and to me, it shows how important this work is — not only for us to strengthen the Jewish community here in Germany and to give it a future, but also outside the country. Many descendants of Jewish families, who were victims of the Shoah and who live around the world, want to know how Germany deals with Jewish life today, a country, where 76 years ago, the most brutal crime in human history took place.

Festivals like the Jewish Feast of Tabernacles, the Sukkot, were celebrated in a grand manner. For the first time, non-Jewish people could participate. What did people think of these invitations?

During Sukkot, guests should also be invited into the huts. Unfortunately, most Jewish festivities take place with police presence because of security reasons and it is difficult when external guests want to participate.

That probably also has to do with the fact that these celebrations traditionally take place in private areas.

That is true. One of the beautiful results was to see that many young people, especially young Jewish people, for whom it is a matter of course to belong to a modern society, were able to show this with self-confidence.  And this also includes appearing self-confident to the outside world. Many Jewish communities were ready to create new networks and cooperated with non-Jewish institutions and cities.

Hopefully, it has shown that such concepts have a future and that we can motivate many to celebrate together on a larger scale. To develop an understanding, to get to know each other, for a common future. The hope is to enable a certain empathetic access to Jewish life. Not just theoretically, but to actually meet, to experience beautiful moments together, to build bridges - for empathy and respect.

Could you also involve schools where the Holocaust is the only point of reference to the issue?

We have made inroads into involving schools by cooperating with UNESCO project schools and organizing cultural events in educational sectors, which regularly take place under the umbrella of the association. Here, we always speak about Jewish life today.

Thankfully, we have two teachers working part-time, sent to us by the state of North Rhine-Westphalia to deal with the subject on behalf of the association. Of course, we are trying to change something, but we know that it is not easy. Each state and the schools themselves determine what is covered in depth in school curricula. But we have made good inroads.

For example, together with partners, we produced a 3D film, which was released some weeks ago. Through the film, we try to make 1,700 years of Jewish life in Germany comprehensible for pupils. The idea was to develop and offer modern formats for use in the classroom. The film is short and incisive, and it shows not only the history but also the present status of Jewish life in Germany.

You wanted to celebrate the year as publicly as possible. Was that successful or did you need a lot of police presence during the events?

Unfortunately, the reality is such that due to security reasons, no event on Jewish life can take place without police presence. Even this is part of Jewish life in Germany. Despite that, many guests come to our events. The commemorative year has been extended to July 2022. Naturally, we hope that it stays that way and that we are not harassed or threatened by any incidents.

Just recently, the actual occasion of this jubilee year was celebrated. On December 11, 321, Constantine the Great passed a decree that allowed Jews to be part of city councils. The celebratory association commemorated the 1,700 years of this historical document with an equal number of flags hoisted all over Germany. Who participated in this flag-display initiative?

Under the initiative, we hoisted over 1,700 flags with many people and institutions all over Germany, against antisemitism and for Jewish life. We are thankful for the wide participation and have wonderful pictures of proud people showing and standing together against antisemitism.

Do you sometimes feel uncomfortable when you see how the AfD blatantly presents itself as antisemitic in Germany?

Yes, naturally, I observe that personally with some worry. But antisemitism is not restricted to one party. Empirical studies show one in four Germans have antisemitic ideas. We are trying to counteract that. German Jews are a post-migrant group. Probably, over 95% of Jewish people in Germany are themselves migrants or have migrant parents and grandparents. German Jews from before the Shoah are non-existent. Only someone who stands for a pluralistic society can fight for Jewish life in Germany.

2,200 events took place in the celebratory year and that sounds like a success story. What needs to be done so that it stays that way?

For one, we have a future-oriented culture of remembrance, which we will continue to need. It is important for everyone to learn from the past and to ensure that such a human tragedy does not repeat itself. But here a paradigm shift in the remembrance and commemoration culture is required, because the generation, which could talk first-hand about that crime against humanity, will soon cease to exist.

The Shoah will be part of history. We need to ensure that we do not forget and distance ourselves. That is why a future-oriented remembrance and commemorative culture is very important.

On the other hand, it is important that one continues to convey a realistic picture of Jews living in Germany, naturally, free of prejudice and stereotypical thinking, but also free of glorified ideas that people very often have about Jewish life.

In my opinion, this is the only way to ensure that we can live together in an uninhibited atmosphere. I hope that we were able to contribute something to this with the year of celebration. My children don't want to be associated only with the Holocaust and not only with history, but they live in the now, today, and want to deal with their own future in Germany.

Musician and entrepreneur Andrei Kovacs comes from a Hungarian-Jewish family. His grandparents survived the ghetto in Budapest and the concentration camp at Bergen-Belsen. The 46-year-old heads the association, "321-2021: 1,700 years of Jewish life in Germany."

The interview was translated from German.