On Saturday, 1,700 flags will be raised to commemorate 1,700 years of Jewish life in Germany. Due to the pandemic, the festival year will be extended until summer 2022. 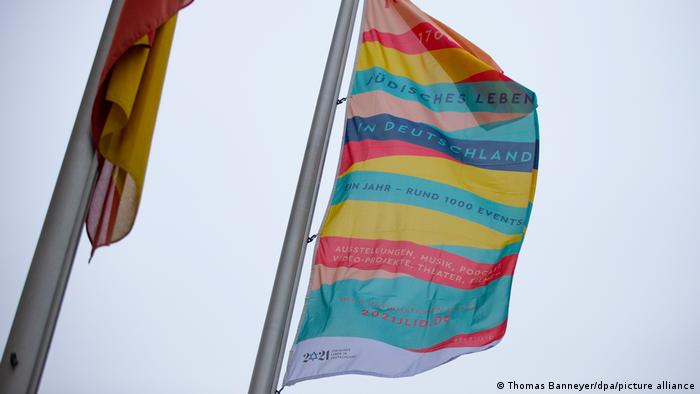 "Everywhere in Germany this weekend people are taking part in the action 'Fly the flag for Jewish Life and against antisemitism,'" read a tweet by the organizers ahead of the event.

A commemoration of Emperor Constantine's edict

With the action, the anniversary year marking 1,700 years of Jewish life in Germany (#2021JLID) reaches its climax on December 11.

On exactly this day 1,700 years ago, the Roman Emperor Constantine issued an edict that marks the earliest evidence of Jewish life in Germany.

At the time, the Cologne City Council wanted to repair a dilapidated bridge but lacked the financial means, and a Jew named Isaac wanted to help out. He would, however, have to hold office in the city council. A request was subsequently submitted to the Roman Emperor Constantine the Great.

"By law valid throughout the empire, we permit all city councils to appoint Jews to the city council," read Constantine's resulting edict. The emperor had unknowingly produced the first written evidence of Jewish life in Europe north of the Alps.

The festival year was opened with a ceremony on February 21, 2021 in the presence of Federal President Frank-Walter Steinmeier.

The year's program counted more than 1,500 events, including a traveling exhibition tracing the history of the edict of Emperor Constantine, as well as a podcast about Jewish life in Germany.

The organizers of the festival year "1,700 years of Jewish life in Germany" are pleased with the outcome of the program, which will be extended until summer 2022 due to the pandemic.

"Many Jews said that for the first time in 76 years they had dared to show their customs in German squares and streets," says Andrei Kovacs, the managing director of the association.

How little non-Jews know about Jews is also shown by a video that was shot during the festival year. In it a young person says: "To be Jewish means to have to explain again and again what it means to be Jewish."

Another particularly impressive highlight, says Kovacs, was the construction of the first tabernacle outside a Jewish facility in Münster, at the Tabernacles Festival in September.

The Holocaust and antisemitism were not actually the focus of the festival year, but in view of an increase in antisemitic incidents, they cannot be ignored. According to the Department for Research and Information on Antisemitism (RIAS), there were a total of 522 antisemitic incidents perpetrated, including attacks, property damage, threats or agitation, in Berlin alone in the first half of 2021.

"Judaism is constitutive for Germany," underlines the general secretary of the Association 321, Sylvia Löhrmann, adding, "The flag campaign aims to show that too. The fact that so many people are participating sends a strong signal: We belong together!"

Eight candles and a helper: Hanukkah

On November 28, Jews will celebrate the eight-day festival of Hanukkah, commemorating the rededication of Jerusalem's Second Temple in 200 BC.

A light in the darkness: Remembering Germany's destroyed synagogues

On the night of November 9, 1938, and the days that followed, the vast majority of Germany's more than 2,000 synagogues were destroyed. In commemoration this year, they were brought back to life in colorful projections.