Venezuela ready to defend itself after US invokes Rio Treaty

Foreign Minister Jorge Arreaza has described the US' decision to invoke a defense pact as "illegal" and "dangerous." Washington has said they were left with little choice due to "bellicose" moves from Venezuela. 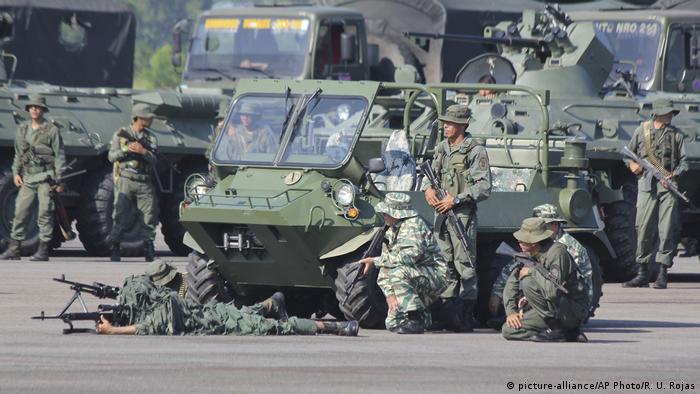 Venezuela sent a strong message to the US on Friday saying it was prepared to defend itself in the face of Washington's decision to invoke a regional defense pact and a stinging rebuke of President Nicolas Maduro's regime.

"We are ready to protect ourselves, we are ready to react," Foreign Minister Jorge Arreaza told a news conference at the UN's headquarters in Geneva.

"We will let no one trample sacred Venezuelan soil, we will respond and hope that never happens," the minister said.

Arreaza was responding to US Secretary of State Mike Pompeo who recently described President Maduro as dangerous for both Venezuela and other Latin American nations.

The US invoked the Inter-American Treaty of Reciprocal Assistance (TIAR) in response to large-scale movements by the Venezuelan army near the Colombian border.

"Recent bellicose moves by the Venezuelan military to deploy along the border with Colombia, as well as the presence of illegal armed groups and terrorist organizations in Venezuelan territory, demonstrate that Nicolas Maduro not only poses a threat to the Venezuelan people, his actions threaten the peace and security of Venezuela's neighbors," Pompeo said.

He wrote on Twitter: "The US joins 11 partner nations in invoking the Rio Treaty to confront the political, economic, & humanitarian crisis unleashed by Maduro on #Venezuela & the region. Together we will consider multilateral economic & political options to end the havoc."

Arreaza described the invoking of the TIAR as "illegal" and "dangerous" as "it suggests they have activated a mechanism to attack Venezuela."

Trump said Thursday that former national security adviser John Bolton "was holding me back" on Venezuela, where the US government, along with Colombia, sees opposition leader Juan Guaido as the legitimate president.

The US president's move is his latest gambit to oust counterpart Nicolas Maduro from power. Meanwhile, Colombia says it will grant citizenship to babies born there to Venezuelan parents and thus at risk of statelessness. (06.08.2019)