Venezuelan President Maduro has accused Colombia of plotting his overthrow, while Bogota said Venezuela harbors and backs rogue rebel fighters. The US offered Colombia its "full support" against any attempted aggression. 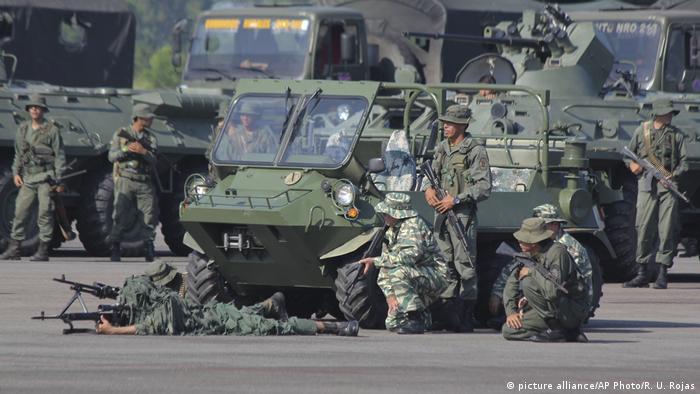 Venezuelan President Nicolas Maduro deployed 150,000 troops to his country's border with Colombia as tensions continue to rise between the two countries.

"The moment has come to defend our sovereignty and national peace by deploying our defense resources in full force," Maduro said on Twitter.

Aside from personnel, Maduro's government deployed tanks and missile carriers to its western Tachira state, an area that has become the departure point for millions of Venezuelans migrating to the south. There are currently more than 1 million Venezuelans living in Colombia.

"This is an operation to defend our national territory," Remigio Ceballos, strategic commander of the Bolivarian National Armed Forces, said. He added that Venezuela's army was ready to respond to attacks from Colombia, the United States or any other threat.

The deployment is the latest in a string of military warnings Venezuela has leveled at Colombia, as relations between the two countries have steadily deteriorated.

Bogota has accused Venezuela of harboring Colombian armed rebels, estimating that as many as 1,000 National Liberation Army (ELN) operatives, some 40% of that rebel group's fighting force, are in Venezuela.

From there, the rebels have planned terrorist attacks, such as the car bombing at a Bogota police academy in January that killed more than 20 mostly young cadets, Colombia said.

Colombian Vice-President Marta Lucia Ramirez said cooler heads should prevail: "We call on all Colombians for calm, knowing that we possess a sufficiently equipped and capable public force.

"We must not react to this threat, because it would be foolish to think it could be real," she said of Maduro's troop deployment.

US officials responded to Maduro's move on Tuesday by expressing unwavering support for Colombia.

Carlos Trujillo, US ambassador to the Organization of American States, said it was "totally unacceptable" that Maduro's "illegitimate government" was threatening the region's security and peace.

"Colombia's allies will do everything possible to help one of the best allies we've had, not only in the Americas but in the world," Trujillo told reporters.

The US special envoy to Venezuela, Elliott Abrams, went further.

"If there are cross-border attacks from Venezuela to Colombia, we can expect Colombians to react," Abrams said. "And obviously, we would fully support Colombia in that situation."

Venezuela has come under mounting pressure from the US and Colombia, who are among more than 50 nations that have declared Maduro illegitimate and backed opposition leader Juan Guaido's push to oust the socialist president.

But Maduro has managed to maintain the army's support, despite several defections, and he is still supported by major international powers such as China, Russia and traditional ally Cuba.

National Security Adviser John Bolton said Venezuela was now part of an "exclusive club of rogue states," and issued a stark warning to any countries wanting to do business with Caracas. (07.08.2019)

The Colombian government has accused Venezuela of harboring the former rebels as they launch a new campaign against "the oligarchy." The rebels said the government had turned their back on their promises for peace. (29.08.2019)