National Security Adviser John Bolton said Venezuela was now part of an "exclusive club of rogue states," and issued a stark warning to any countries wanting to do business with Caracas. 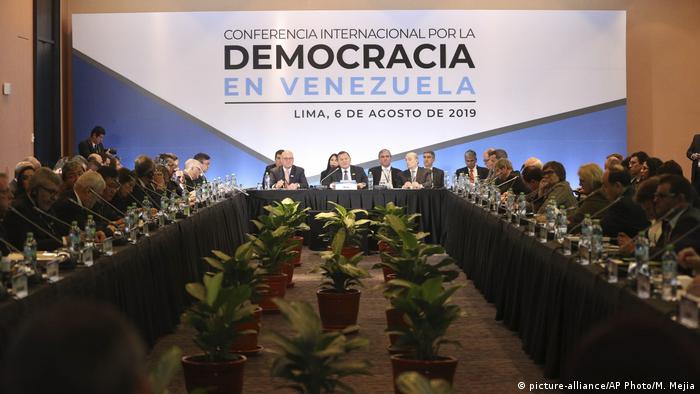 The US on Tuesday promoted its policy of maximum pressure on Venezuela in the Peruvian capital Lima, where dozens of countries gathered to discuss the political crisis plaguing the oil-rich nation.

For nearly 8 months, Venezuela has been embroiled in a struggle between Juan Guaido, speaker of the National Assembly, who proclaimed himself acting president, and President Nicolas Maduro.

The US supports Guaido, has applied economic sanctions and sought to isolate the Maduro regime. Prior to the Lima meeting, Washington announced the freezing of all Venezuelan government assets in the US, but fell short of a total embargo on the South American nation.

Representatives of more than 50 countries attended the meeting, including Germany, Britain, France and Japan, as well as representatives for the European Union and Inter-American Development Bank.

But China, Russia, Cuba and Turkey, traditional allies of Venezuela's government, snubbed the event. Mexico and Uruguay also turned down the invitation, as they have sought to stay neutral in the political conflict.

For Venezuela's allies, Washington had a clear message. "To both Russia and China, we say that your support to the Maduro regime is intolerable," Bolton told the conference.

"We are taking this step to deny Maduro access to the global financial system, and to further isolate him internationally," the US national security adviser said.

Colombia, which has borne the brunt of the Venezuelan refugee crisis, backed the US strategy. Foreign Minister Carlos Holmes Trujillo urged more support for Guaido, "more pressure" on Maduro and "more sanctions."

Peru's government, the meeting's host, had said the goal was to reach consensus on a solution for Venezuela's crisis and to gather financing to help regional nations affected by the massive influx of refugees. But not much progress was achieved on either front.

Venezuela's government on Tuesday responded to the assets freeze by asking the UN Security Council to urgently investigate what it dubbed "dangerous" actions by the US.

Maduro's government said the US was acting like an "outlaw state” and that the Trump administration was the "most racist in the history of the Western Hemisphere."

Caracas and other parts of Venezuela have been hit by a massive power cut. The government blamed the blackout on an "electromagnetic attack." (23.07.2019)

US Secretary of State Pompeo blames Cuba for Venezuelan regime

On a visit to Latin America, the US top envoy has blamed Cuba for propping up the Venezuelan regime. Moving on to Mexico, the focus was on trade and migrants, a day before a key trade deadline. (21.07.2019)