The US president's move is his latest gambit to oust counterpart Nicolas Maduro from power. Meanwhile, Colombia says it will grant citizenship to babies born there to Venezuelan parents and thus at risk of statelessness. 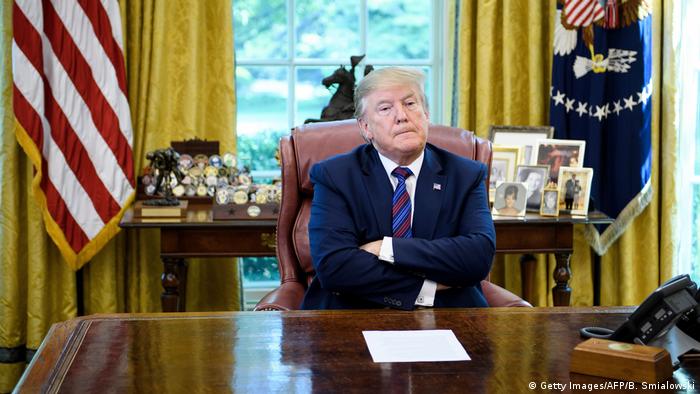 US President Donald Trump's administration on Monday froze all assets held by Venezuela's government in the US.

The governments of the US and many Latin American and EU countries have called on Maduro to step down and allow Venezuela's recognized opposition leader, Juan Guaido, to assume the presidency.

The executive order came amid an ongoing human rights crisis in and around Venezuela: More than 4 million people have fled the country due to economic chaos and food shortages.

Colombian President Ivan Duque announced on Monday that his country will grant citizenship to up to 24,000 children born to Venezuelan parents in the country on or after August 19, 2015. More than 1.4 million Venezuelans have fled across the border into Colombia to escape ongoing conflict and chronic shortages in their homeland.

Children born to Venezuelans abroad have a right to Venezuelan citizenship, but it has become difficult to obtain. Venezuela severed diplomatic ties with Colombia and no longer operates consulates there. Statelessness would have left the children unable to travel internationally, buy homes, have legal jobs or marry as adults.

The measure will run for two years or until "the circumstances impeding the registration of boys and girls as Venezuelans cease."

"Today we support these defenseless children who want to have the right to a nationality and proudly tell them that they are Colombian," Duque said Monday. He added that his government had administered 1.2 million vaccines and enrolled more than 182,000 children in school.

International accords require Colombia to provide citizenship to people at risk of statelessness. Advocacy groups have pressured the government to comply with such treaties for several months.

The issues of stateless children hasn't surfaced in other South American nations that receive large numbers of Venezuelans, including Peru, because many have laws that allow babies born in within the borders of their territory to obtain citizenship regardless of their parents' migration status.

Germany's foreign minister told DW that Berlin supports new elections in Venezuela, as Nicolas Maduro "is not a democratically legitimate president." Meanwhile, Maduro announced Venezuela is closing its US embassy. (24.01.2019)