US Secretary of State Pompeo blames Cuba for Venezuelan regime

On a visit to Latin America, the US top envoy has blamed Cuba for propping up the Venezuelan regime. Moving on to Mexico, the focus was on trade and migrants, a day before a key trade deadline. 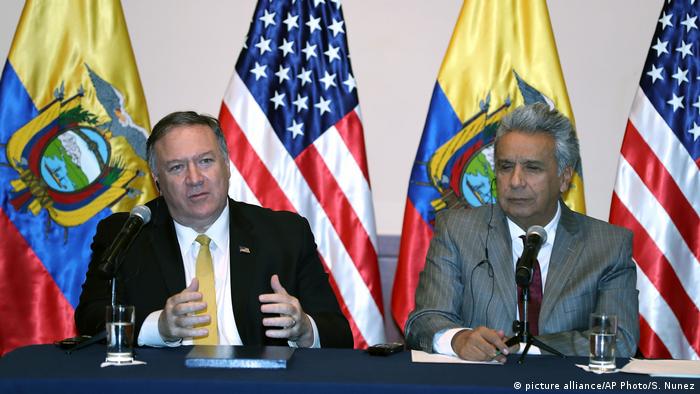 While visiting Ecuador over the weekend, US Secretary of State Mike Pompeo said that free and fair elections in Venezuela would not be possible while Cuba was supporting its embattled president, Nicolas Maduro.

"With respect to Maduro staying, it seems incomprehensible that you could have a free and fair election with Maduro still in Venezuela on the ground," Pompeo said in Ecuador on Saturday evening. "I don't want to rule out the possibility that someone could find a clever way to do that, but it seems that to the extent that you have the Cubans protecting Maduro, they would not be able to deliver a free and fair election."

The United States has been leading efforts to oust Maduro since his reelection in 2018, which Washington considers illegitimate.

The US is one of many states, including Germany, supporting opposition leader Juan Guaido, who has failed to oust Maduro despite declaring himself Venezuela's rightful president.

Maduro maintains that Guaido is a puppet backed by the United States and other Western countries seeking to oust him.

Backed by the military, Maduro has the ongoing support of China, Russia and Cuba.

Maduro has presided over a crumbling economy that has led to one of the worst refugee crises to ever hit Latin America.

Moving on to Mexico on Sunday, Pompeo met with Foreign Minister Marcelo Ebrard a day before the deadline on a key trade arrangement.

Mexican authorities were upbeat about the meeting. "On immigration, Secretary Pompeo recognized the significant progress made by Mexican operatives, in compliance with the agreement between the two countries," the Mexican Foreign Ministry said in a statement.

Ebrard said Mexico has fulfilled its commitment to reduce migration from Central America, in part by deploying 21,000 National Guardsmen.

In June, Mexico averted punishing tariffs on shipments to the US by promising to restrict the flow of illegal migrants from Central America by July 22.

That 45-day period expires on Monday, and should the US determine that Mexico has not done enough to stem the migrant tide, talks will start to change rules so that most asylum-seekers apply for refuge in Mexico, and not in the United States.

Conditions at migrant camps on the US border have been strongly criticized by US lawmakers and rights' groups.