Russian Foreign Minister Sergey Lavrov met his Venezuelan counterpart for talks in Moscow. Russia has doubled down on its support for Venezuela's President Nicolas Maduro, who the US says should stand down. 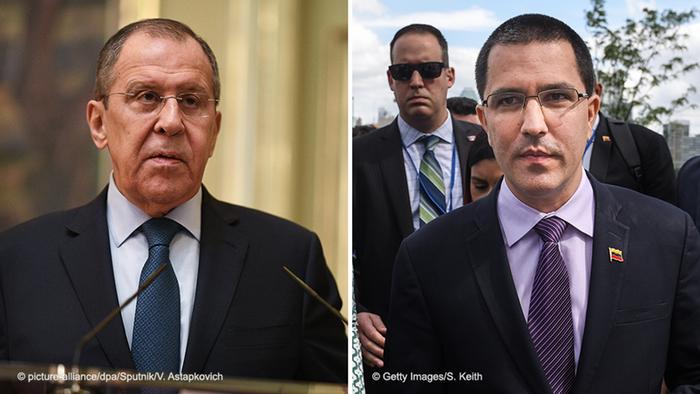 Russia has urged US officials "to abandon their irresponsible plans" for Venezuela.

"We call on the Americans, and all those supporting them, to abandon their irresponsible plans and to act exclusively within the boundaries of international law," Russian Foreign Minister Sergei Lavrov said in Moscow on Sunday.

Lavrov met with Venezuelan Foreign Minister Jorge Arreaza, who thanked Russia for its support, saying ties "have become more significant not only for our two countries but for the world."

The Russian minister accused the US of "unprecendented" pressure on the government in Caracas aimed at "toppling the legitimate authorities of Venzuela."

Lavrov and US Secretary of State Mike Pompeo are due to meet in Finland on Monday.

Trump described the discussion as a "very positive conversation."

Russia and the US have both blamed one another for making Venezuela's deep economic woes worse. They also accuse each other of interfering in Venezuela's internal affairs, and Pompeo has even raised the prospect of US military intervention.

Maduro told his armed forces on Saturday to be ready for any possible military action by the US, as Guaido urged his supporters to march on army bases.

With the backing of more than 50 countries that support his claim to leadership, Guaido has been trying to wrest power from Maduro since January. As leader of the opposition-run National Assembly, he claims to be the legitimate head of state.

Juan Guaido's attempt to force regime change with military backing has failed, and the protracted political deadlock is placing a heavy burden on the people. A new approach is needed, writes Günther Maihold. (02.05.2019)