Venezuela's president told the army to 'be ready to defend the homeland' and that he sought their 'active loyalty.' Meanwhile, self-declared president Juan Guaido urged supporters to demonstrate at military barracks. 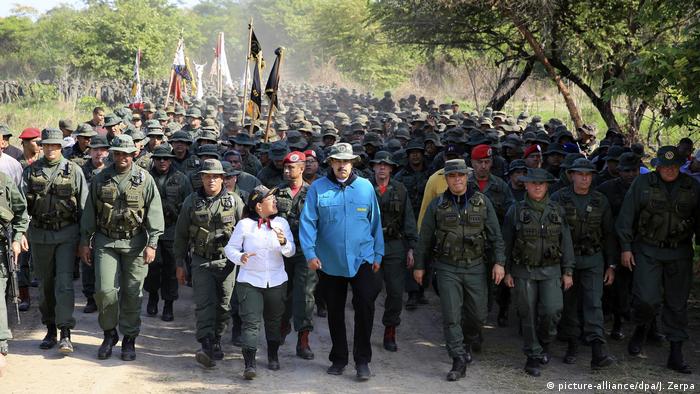 Venezuelan President Nicolas Maduro urged the army on Saturday to prepare for the possibility of US military action. The president rallied troops during a televised appearance that was meant to showcase his hold on the country's army.

The move came just days after opposition leader and self-declared interim president Juan Guaido tried to incite a military insurrection that was unsuccessful and culminated with a group of 25 rebel soldiers seeking refuge in the Brazilian Embassy in Caracas.

The Supreme Court, stacked with Maduro loyalists, also ordered the rearrest of opposition figure Leopoldo Lopez, who was freed from house arrest by the rebel soldiers and who is now taking refuge in the Spanish Embassy.

On Saturday, Guaido's supporters made their own appeals to the military, responding to his call to march on military barracks in Caracas.

The 35-year-old opposition leader urged his supporters to "mobilize in a civil and peaceful way" to their nearest military base, to persuade the armed forces to abandon Maduro and back a transitional government.

"The goal is to carry our message without falling into confrontation or provocation," Guaido said. But not as many people heeded the call, with just hundreds of demonstrators having gathered.

Maduro told the military on Saturday that they needed to be "ready to defend the homeland with weapons in your hands if one day the US empire dares to touch this territory, this sacred earth."

In the televised address, mandatory on all Venezuelan TV channels, Maduro appeared alongside his defense minister, Vladimir Padrino, and among more than 5,000 troops.

"I told the generals and admirals yesterday: loyalty, I want an active loyalty... I trust you, but keep your eyes open; a handful of traitors cannot tarnish the honor, the unity, the cohesion and the image of the armed forces," the president said.

A military helicopter that was headed to Maduro's rally crashed in a neighborhood outside of Caracas. The event took place in the rural state of Cojedes.

Seven Venezuelan military officers were killed, including two majors, three captains and two lieutenant colonels. Maduro mourned the loss of "seven worthy officers of the country" and expressed his "heartfelt condolences" to their family and friends.

The Venezuelan president has proclaimed support for his armed forces just days after the opposition staged a rally to display its military backing. Meanwhile, international pressure is mounting on Maduro to step down. (02.05.2019)