Peru, Paraguay, Chile, Argentina, Colombia and Canada have demanded the UN-backed court in The Hague look into Nicolas Maduro's alleged crimes. The unprecedented call came at a crucial moment for global institutions. 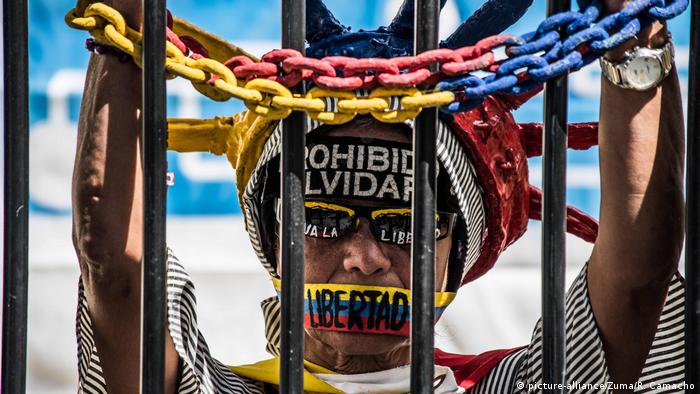 Five South American nations and Canada lodged a historic request with the International Criminal Court (ICC) on Wednesday, asking it to look into alleged crimes against humanity committed by Venezuela's government under President Nicolas Maduro.

In filing their complaints, Peru, Paraguay, Chile Argentina, Colombia and Canada took the unprecedented step of asking the tribunal in The Hague to investigate a fellow member country.

They presented their request at the UN General Assembly in New York as Maduro was on his way to the gathering, where concern has been voiced over his repressive leadership and the related economic and humanitarian crisis, including the outpouring of Venezuelan refugees into neighboring countries.

'We will not be complicit'

The filing nations called upon the ICC to investigate alleged torture, rape, murder, violations of due process and crimes against humanity perpetrated by Maduro's government since February 2014.

In their seven-page letter, the nations referred to reports by the UN High Commissioner for Human Rights, the Inter-American Commission on Human Rights and international lawyers documenting the suspected crimes.

"To remain indifferent or speculative in front of this reality could be perceived as being complicit with the regime. We are not going to be complicit," Paraguayan Foreign Minister Andres Rodriguez Pedotti said.

While the request for a probe does not guarantee its taking place, it could speed up and broaden the scope of an ongoing preliminary probe in the ICC.

The secretary general of the Organization of American States (OAS), Luis Almagro, applauded the six countries' action in "creating a crucial milestone in the interests of justice, accountability, non-repetition and reparation to the victims of the Venezuelan dictatorship."

Venezuelan officials did not immediately respond to the action.

The political crisis in Venezuela has exacerbated an already feeble economy and sent more than 2 million of Venezuelans fleeing into neighboring countries, with  1 million landing in Colombia alone.

Colombian President Ivan Duque called for the creation of a multilateral fund to help Venezuela's neighbors deal with the influx of refugees.

Historic request at a timely moment

The historic request for the UN-supported ICC to investigate Venezuela came as US President Donald Trump has repeatedly denounced the efficacy of multilateral institutions.

In his speech at the General Assembly on Tuesday, Trump said that for the US, "the ICC has no jurisdiction, no legitimacy, and no authority."

Canadian President Justin Trudeau, one of the signatories on Wednesday's letter, described the court in The Hague as a "useful and important way of promoting an international rules-based order."

The ICC was created with the support of the UN in 2002 to prosecute war crimes, genocide and other crimes against humanity that otherwise might not be brought to justice.

As Venezuela’s crisis spirals out of control, neighboring countries are looking out for themselves, shutting their borders to refugees. But experts warn the crisis cannot be resolved without a multilateral effort. (21.08.2018)

The economic turmoil in Venezuela has led to an exodus from the country. Those who are able to do so travel to Europe. In Spain, Venezuelan asylum-seekers have come to outnumber applicants from everywhere else. (29.08.2018)

Venezuelans in US hope to change country from outside