The political and economic crisis in Venezuela has unleashed a mass exodus and Colombia has borne the brunt of it. A Colombian politician has called for a quota system to distribute the refugees across the region. 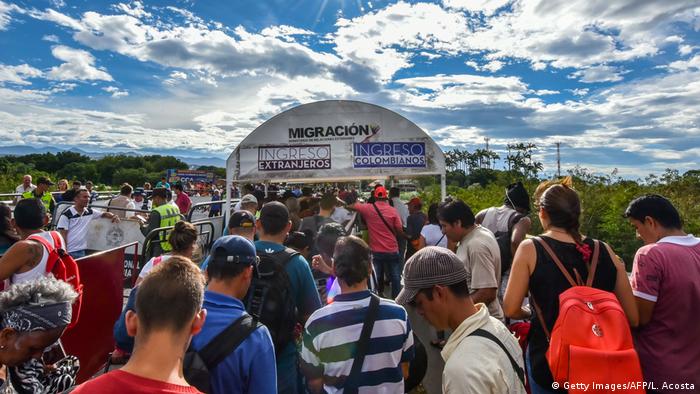 The vulnerability of Colombia's border with Venezuela and the surging immigration influx has been a matter of national discussion in the South American nation. On Monday, presidential hopeful Marta Lucia Ramirez urged Latin American countries to consider creating a quota system for Venezuelan refugees in a bid to share the burden of the mass exodus.

Ramirez, who is vying to become the official candidate for the conservative party, offered a plan that would provide Venezuelan refugees with a residency and work permit, as well as minimal access to state services for a two-year period.

Her concerns are well founded. In his most recent analysis on the subject, political scientist Günther Maihold of the German Institute for International and Security Affairs (SWP) warns of the destabilizing effects that the Venezuelan situation could present to Latin American nations.

This threat is greatest for neighboring Colombia whose close links to Venezuela range from ideological confrontation; to border disputes; to illegal violent actors; to migration flows; to the narcotics trade and economic exchange. Maihold asserts that both countries are so interconnected, that the individual problems between and within each country become "almost indistinguishable."

Read more:Could there be a Venezuelan refugee crisis?

The Andean nation is in the midst of implementing an unpopular peace agreement with the FARC guerrillas to end half a century of armed struggle and ensure its own security. But Maihold warns that Venezuela's economic and political crisis is eroding these efforts.

Colombia cannot go at it alone

"Venezuela is going through a humanitarian tragedy," says Ramirez, one that Colombia must not bear the brunt of without external help. "This challenge is too great for us. If we expect to take this on ourselves, we will end up sinking." The question remains if Ramirez's proposal of a regionwide quota system is actually viable.

Thomas Fischer, professor of Latin American History at the Catholic University of Eichstätt-Ingolstadt, recalls Colombia's immigration past. "The precedent of initiatives like the one Ramirez is proposing lies in the immigration rules of the 1920s, when Colombia followed the racist legislation of the United States that prohibited Chinese nationals from entering the country. Other Latin American countries also placed obstacles on these immigrants at a time when Europeans were warning of the 'yellow danger'," Fischer told DW.

He believes that if Ramirez's idea gains popularity in Latin America, it will be because of the xenophobic discourse with which it is associated. In the end, "due to the large scale and porous nature of the border between Colombia and Venezuela," Fischer does not believe that quotas would help control the migration flow.

Europe as the example

Claudia Zilla of the German Institute for International and Security Affairs compares the proposal to the current efforts in the EU to deal with migration flows. European countries along the Mediterranean have been "asking northern countries for years to share the immigration load coming from Africa and the Middle East." Angela Merkel has also urged member states to proportionally distribute the refugees that came to Germany. Both cases, Zilla says, have to do with principles of "humanitarianism and solidarity."

Proposing the implementation of a quota system is the first step to tackling the problem. But the most important thing is that Latin American countries "recognize the magnitude of the challenge that this massive emigration of Venezuelans entails and that they respond together, as a region, taking into account what is fueling it and the negative effects it is having on Colombia's peace process," Zilla says.

Well before a quota agreement can be achieved, Colombia will likely have to seek financial resources and the know-how to erect the necessary infrastructure to house the Venezuelan migrants as they arrive, according to Zilla.  She stresses that quotas are only one part of a larger solution and that "as of now, no concrete initiatives" have been proposed.

The role of supranational organizations

There are many questions that Latin American nations must answer. How would the quota system work? Would embassies grant Venezuelans asylum through a lottery system? Would Venezuelans be held in refugee camps along the border and then be shipped to other countries? How much would the funding for camps cost and who would pay? "All of this has to be thought over," Zilla says.

To that end, she believes that Latin American supranational organizations must use their summits to address the issue. Yet, organisms like the The Union of South American Nations (UNASUR) and the Community of Latin American and Caribbean Countries (CELAC) are thus far not fulfilling this role.

Zilla explains that "regardless of whether ally nations of President Maduro's government wanted to take part in these talks or not, the remaining nations should reach a consensus and take action."

"What is absurd is that nothing is done if all countries do not agree," she says, criticizing the current regional paralysis.

The emergency declaration comes as 40,000 Venezuelans have poured across Brazil's northern border in recent months. The influx has stressed infrastructure and caused security concerns. (16.02.2018)