Remittances in the Colombian border city of Cucuta have doubled as Venezuelans line up to receive vital funds sent from family and friends abroad. Aitor Saez reports from Cucuta, Colombia. 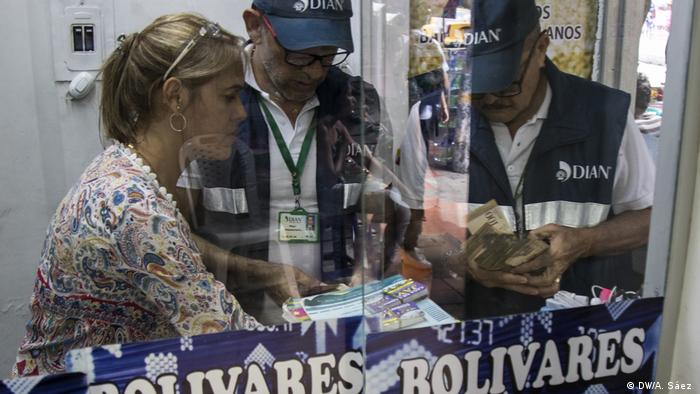 Dozens of people sheltered from the sweltering sun at the entrance of Cucuta's Ventura Plaza shopping center in a long line, waiting to collect the remittances sent from family members living abroad. The cash withdrawals are a necessity for those looking to continue their exodus to other countries or those who simply need to buy basic staples. This is one of the many interminable lines of waiting Venezuelans that have permeated the landscape of the Colombian border city in the recent months.

Milainny Torres waited nervously at the end of a line with about 50 fellow Venezuelans, two hours before the Western Union closed for the day. "I went at 9 in the morning to another Western and they told me the line at this one would be faster, but I've been here for six hours and it is not moving at all," said the 31-year-old woman, who came here from the Venezuelan city of Maracaibo. It took her two days to get to Cucuta, a journey that she takes every two weeks in order to withdraw the $100 (€81) her husband sends from Ecuador. "He left five months ago because we didn't even have enough money to put food on the table with four kids (ages 6, 9, 10 and 13). It's better to travel here and buy everything than to work in Venezuela, where money is worth nothing," she explained.

Later in the day, Jose Leon dozed off while sitting on his suitcases. "I come from Maturin, a two-day trip that turned into four days due to delays and problems with our bus," the young man said. He recently arrived from the northeast of Venezuela and planned to continue on to Peru after he withdrew €50 that his friend from Russia had sent him. The majority of the money transfers come from Spain, the US, Ecuador or Peru. The amounts tend to be around $100, with regular travelers from San Cristobal — a Venezuelan city located just across the border — withdrawing approximately $60 on a weekly basis. 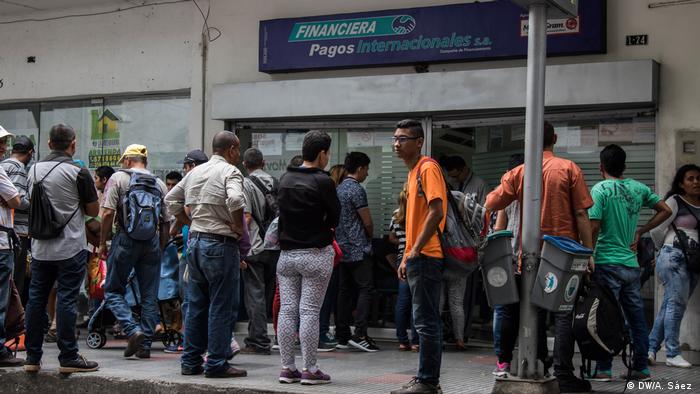 The bolivar falls and remittances rise

The sending of remittances to the northeastern Colombian state of Norte de Santander and its capital, Cucuta, has doubled in the last year. In 2016, $68.7 million (€55.6 million) came in within the first three months of the year. In 2017, the region saw a rise of up to $127.8 million in the same time period, according to Colombia's Central Bank. Some $32.5 million were sent from Spain and 26.1 million from the United States. Both countries top the list of sent remittances and the sums from these and all other countries have increased, except those from Venezuela. Remittances from Venezuela represent only $400,000 and saw a decrease of $1 million.

The rapid rise in remittances may be due to an increase in Venezuelan family members living abroad. Absent official data from the Venezuelan government, it is difficult to calculate the Venezuelan exodus, but it is estimated to be in the millions. According to the International Organization for Migration, 606,281 Venezuelans left the country in 2015. In Colombia alone, some 552,000 Venezuelans arrived in 2017, an increase of 110 percent compared to 2016.

Cucuta sees itself as overwhelmed by the massive increase in financial operations. The city only counts seven cash points: six Western Union offices and the regional Financiera Pagos Internacionales.

The large and growing gap between the official and black market exchanges of Venezuelan currency have made the remittances from Colombia rise dramatically in contrast to those in Venezuela. If a person needs to exchange one US dollar in Venezuela, he or she would receive 11,311 Venezuelan bolivares at the official exchange rate set and controlled by the government. Withdrawing one US dollar in Cucuta yields 2,807 Colombian pesos, which on the black market can be exchanged for 100,250 bolivares, according to the parallel exchange rate calculator DolarToday.

The exchange of bolivares to Colombian pesos has fallen dramatically since 2013. Back then, one bolivar could be exchanged for 70 pesos, while today it is valued at 0.020 pesos. "It's a waste to come here to exchange bolivares because you get absolutely nothing. The bolivar is just wet paper," complained an elderly man while waiting in line.

For this reason, most people who withdraw their remittances in Cucuta spend the money there. They use it to buy basic products or for transportation tickets to other destinations. Even in Venezuela, more and more businesses in border cities are starting to accept only Colombian pesos instead of the local currency.

The Venezuelan government has tried to tackle capital flight and combat what it considers an "economic attack" from neighboring Colombia. Early last year, Venezuelan President Nicolas Maduro established a currency exchange opportunity at the border. Under the plan, citizens would be able to exchange their pesos for bolivares at a rate three times higher than they can in Cucuta. When hundreds of people attempted to do this, the authorized Venezuelan exchange house Italcambio told them they needed to withdraw the money from Titan Intercontinental, a financial institution in Cucuta. Titan Intercontinental told customers that it had no information on this new system, and those who managed to receive any money received it at a lower exchange rate than had been promised under the plan.

In June of 2016, the Venezuelan government attempted another program that would award Venezuelans foreign currency through a lottery system every two weeks, since foreign currency exchange within Venezuela has been under the control of the state since 2003. For three months, hundreds of Venezuelans crowded ATM machines to withdraw as many US dollars as possible, sometimes until the bills ran out. By September, President Maduro suspended the program, at the same time that US sanctions were leveled against his government. The government then reopened the program last week and the first allotments took place this week. It is possible that the rush to obtain currency, as much of it as possible, will occur again. Despite government efforts, the bolivar to Colombian peso exchange continues to sink. 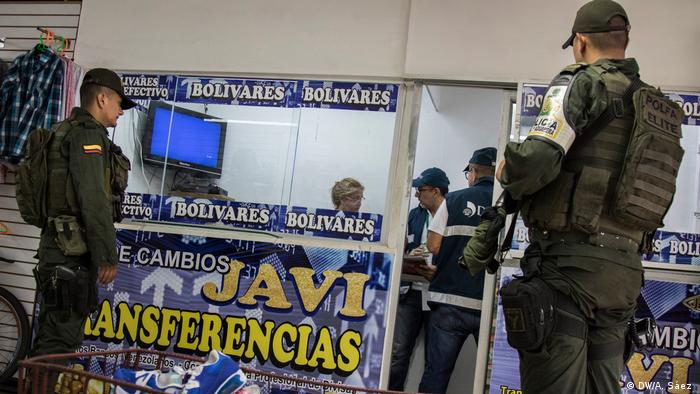 The increase in remittances and exchanges has also created a black market for these transactions in Cucuta in recent months. Tensions boiled over in October 2016, when authorized exchange houses ceased their operations to protest the uncontrolled black market exchanges and demand authorities act. The move managed to extinguish the street-corner cash vendor operations, but a new black market surged. In it, pesos or US dollars are exchanged and transferred directly to customers' Venezuelan bank accounts from the Venezuelan bank accounts of unauthorized exchange agents.

The Direccion de Impuestos y Aduanas (Dian), the Colombian tax and customs agency, began conducting investigations and raids in an effort to enforce currency exchange controls. Between 2016 and 2017, some 63 unauthorized exchange operations were being prosecuted and some 365 million pesos in fines have been applied.

Dian's Maria Pierina spoke to DW about the situation. "Every financial service institution in Cucuta carries out approximately 8,000 transactions per month," she says, confirming that the rise in Venezuelans' need for cash has led to the troublesome increase in illegal exchanges.

DW accompanied one of Dian's operations, where dozens of police agents descended on two illicit exchange houses. One was in a tiny booth inside a hardware store and another in a small back office of a clothing shop.

At the hardware store, the owner had just recently finished his day's work and no money was found. At the clothing shop, inspectors uncovered drawers full of cash, counted the bounty, and informed the owner of the penalties she faced. The Colombian woman cried as she lamented the raid, saying she was trying to transition her illicit operation into a legal business. "I came from Venezuela four months ago with all my savings and this was the only business I was able to open. I pay 2 million pesos in rent, 500,000 in electricity and I barely make 100,000 pesos a day. This affects me a lot because I am now losing everything and I don't even have the money to pay the fine," she explained.

The woman added that she "had no intention" of committing fraud or stealing from the government. "I was just transferring bolivares from one Venezuelan account to another, it is legal," she said. The windows of the small shop were covered in advertisements. One read "professional currency trader," another read "transfers to all Venezuelan banks" and another just simply said "Bolivares, bolivares."

The US could broaden existing sanctions against Venezuela to cover the South American country's important oil industry. US Secretary of State Rex Tillerson said the goal was to return Venezuela to a democratic path. (05.02.2018)

Colombia's president has warned of an unfolding "humanitarian crisis" on the border with Venezuela. Nearly half a million Venezuelans have fled to Colombia to escape economic deprivation and a crackdown on dissent. (14.01.2018)

Venezuela's Constituent Assembly has backed plans for a presidential election before April 30, months ahead of schedule. But neighboring countries say the move to allow Nicolas Maduro a second term lacks legitimacy. (24.01.2018)