President Santos has vowed to step up security at the border and stop issuing temporary visas to Venezuelans fleeing economic crisis. Santos blamed the Venezuelan government for refusing to take care of its people. 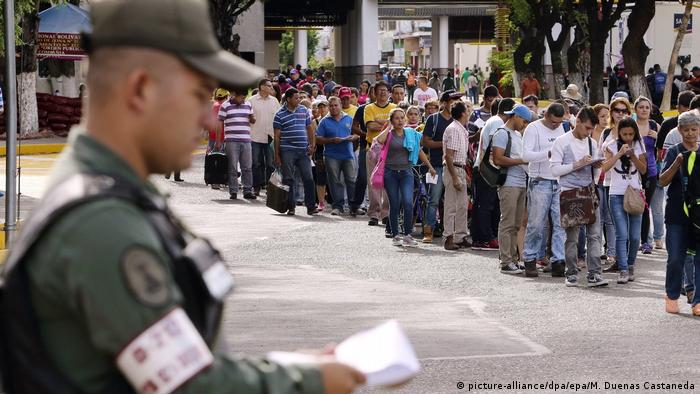 Colombian President Juan Manuel Santos announced on Thursday that his government would strengthen controls at the border with Venezuela after thousands of refugees fleeing economic catastrophe and malnutrition have entered the country.

Speaking at the border town of Cucuta, which is connected by a pedestrian bridge to Venezuela, Santos said that he would deploy 3,000 new security personnel to patrol the two countries' porous land border.

He added that the government would stop distributing day passes that allow Venezuelans to come into Colombia to buy food, medical supplies and other necessities. About 1.3 million people have already registered for this card.

There are 600,000 Venezuelans living in Colombia, and 30,000 have arrived in recent weeks. Many arrive with nothing, and are forced to sleep in doorways or out in the open. Residents of border towns like Cucuta have begun to complain of a rise in crime, as well as Venezuelans taking low-paid jobs in agriculture and the service industry because employers are able to pay them under the table.

"I want to repeat to President Maduro - this is the result of your policies, it is not the fault of Colombians and it's the result of your refusal to receive humanitarian aid which has been offered in every way, not just from Colombia but from the international community," he said.

Despite the crisis, Maduro is expected to win re-election when Venezuela votes on April 22. His government restructured the legislature last year to favor rural areas that support his Socialist party.

Brazil has also announced a plan to step up security on its border with Venezuela after receiving 40,000 refugees.