Displaced Venezuelans fear for their lives in Brazil

Venezuela's shortages have contributed to mass-scale migration in Latin America. Migrants have been met with violent attacks in a Brazilian border town. 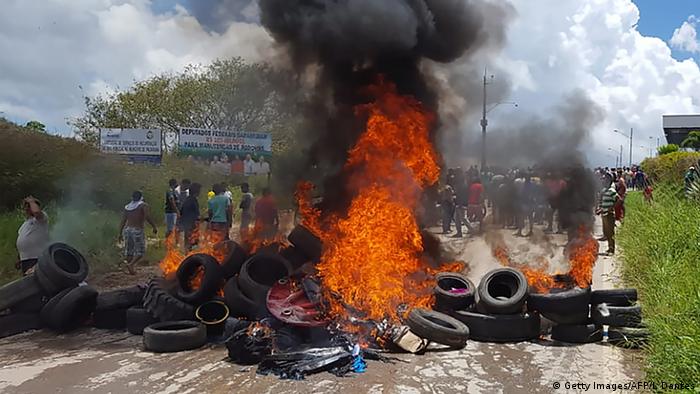 There's currently an unofficial curfew in place for Venezuelans in Pacaraima, a small border town in Brazil's northern state of Roraima. On August 18, following an attack on a Brazilian shop owner that was blamed on a Venezuelan, a mob attacked migrants with clubs and stones and forced about 1,200 people who had taken up residence in Pacaraima to leave. Now, no Venezuelans dare to go out at night.

"We have to hurry home before sundown because groups of Brazilians are patrolling the town and hunting Venezuelans," said Gustavo Luces, who fled from Maturín five months ago.

Miguel Angel Garcia, another Venezuelan, lost all of his possessions and documents when his tent was set on fire during the attack. "The police act as if they don't see the motorbike riders who patrol the streets," he said. "We are treated like dirt, like animals." 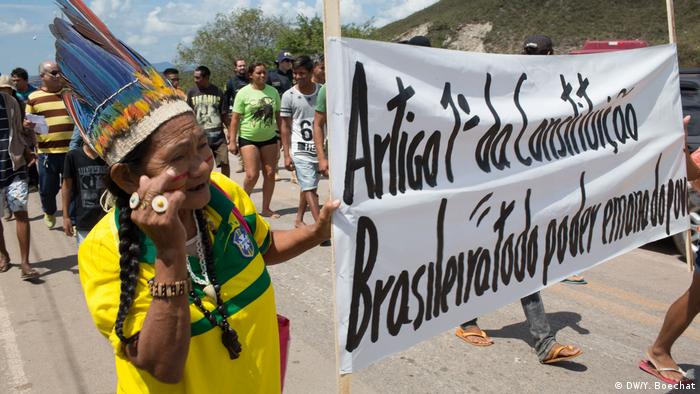 Protests against Venezuelans continued in Pacaraima even after the mob attacks

Police deny that they are overlooking the civilian patrols, but members of the groups that conduct them proudly confirm their existence.

"I would advise the Venezuelans not to be on the streets at nighttime; it could be dangerous for them," said Wendel Lima, a 31-year-old who took part in the attacks but denied that the mob used violence. "We are doing just what has been agreed with the military police: When we come across someone who has settled here, we ring the police."

Fernando Abreu, a retired teacher, said the patrols served to show Venezuelans that they are not welcome. "We will prevent them from staying here," he said, calling for stricter measures at the border. "We are just defending our houses, our physical integrity. Nearly all of them here are criminals who exploit their children by making them beg."

Public Security Minister Raul Jungmann denies that the government has offered little in the way of support for regional governments to feed and house displaced Venezuelans. During a visit to a refugee accommodation on Thursday, he said that from now on state security forces would patrol the town.

"We want to prevent large numbers of immigrants gathering in a town like Pacaraima," Jungmann said. "We will erect temporary accommodation between the border and Boa Vista," the state capital. Jungmann also said the border would not be closed and that the situation in the region was under control. 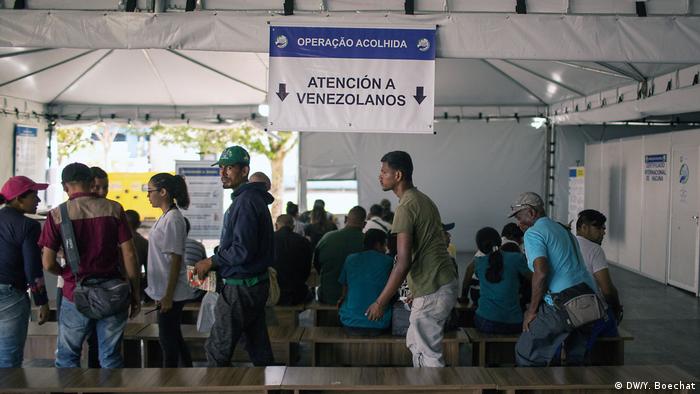 Jesus Bobadilla, a Spanish priest who was born in Morocco, has become an advocate for Venezuelans in Pacaraima — much to the chagrin of longer-term residents. "Talk of peace and quiet in the town is misleading and does not reflect the truth," Bobadilla said. "No one knows what will happen next. Violence is in the air." He added: "I have lost half of my believers."

Bobadilla, too, described the night patrols, when club-carrying hooded men on motorbikes prey on Venezuelans. "They organize so-called car convoys for peace," he said, "but it doesn't have anything to do with peace efforts: just patrols."

Last week, motorbike riders and about 20 cars, mainly big pickups, drove past the places in town where Venezuelans had gathered — until recently. "We drive through the town and appeal for peace," a teacher named Neura Costa said. "We cannot receive so many people, and many of them came here to steal."

The intimidation appears to have worked: The number of Venezuelans seeking shelter in Pacaraima has dropped precipitously since the mob attack. Until August 18, 800 to 1,000 Venezuelans sought refuge in the town per day on average; now, half as many cross the border seeking more sustainable conditions there. 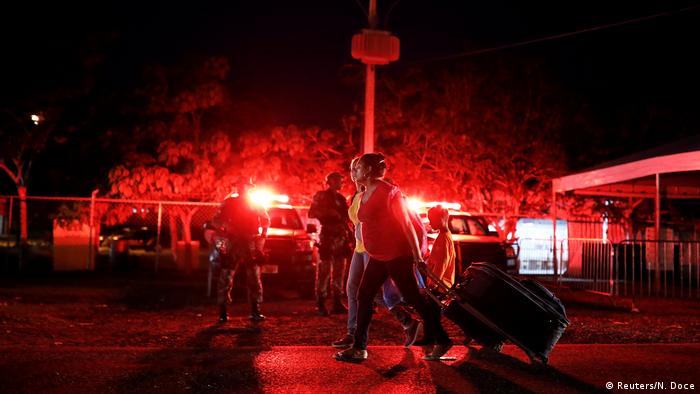 Jose Garcez arrived at the border with his family last week, with eventual plans to settle in Boa Vista. For now, he is keeping his family on the Brazilian side of the border. "The attacks scare us," he said. "No one knows what is going to happen next, and we have no money to travel to Boa Vista."

The family follows the same routine as hundreds of other people holed up on the Venezuelan side of the border: During the day they try to gather food and documents in Pacaraima, and at night they cross back, to sleep in a lorry park.

Whole families, from small children to elderly people, compete for sheltered sleeping places. There is no running water. Many of the families use cardboard boxes for beds.

Every morning Venezuelan soldiers force the people from the shelter. "It is degrading," Garcez said. "We feel like animals. But it is better than the situation I fled. There is nothing there. Four months ago my youngest son died. There was no medication for him. The Venezuelan government killed him".

As Public Security Minister Jungmann visited the reception center on the Brazilian side of the border last week, Garcez was preparing to continue his family's journey. He had sold their last mobile phone for 120 reals (€25, $30), which paid for himself, his wife, his mother and five children. "I hope they do not attack us like happens to Venezuelans here," he said.