As Venezuela's crisis spirals out of control, neighboring countries are looking out for themselves, shutting their borders to refugees. But experts warn the crisis cannot be resolved without a multilateral effort. 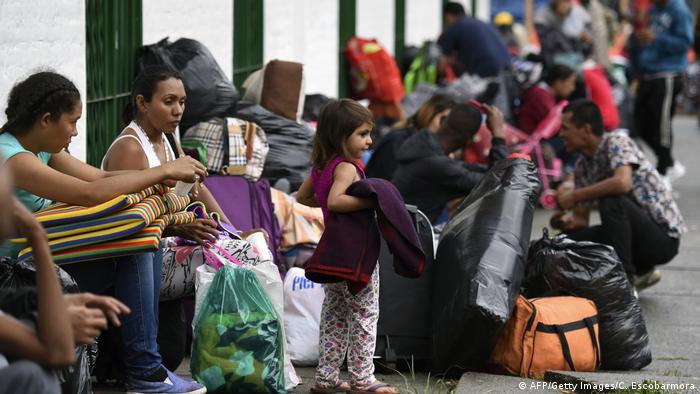 Tensions in Latin America are rising, as the humanitarian crisis in Venezuela and the tide of refugees following in its wake show little sign of receding. On August 17, Venezuelan President Nicolas Maduro announced that his government would employ drastic measures to deal with the economic crisis at the root of the country's ills, which would include raising the price of gasoline and an overhaul of Venezuela's currency.

Whether or not his reforms work, Venezuelans both inside and outside of the country are set to be the ones who deal with the consequences.

Just 24 hours after details of the economic reforms were released, Ecuador announced it would no longer allow Venezuelan refugees to enter its territory without a valid passport, knowing full well that the Venezuelan state is currently unable to issue this document for its citizens. Peru followed suit with the passport requirement, putting great pressure on Colombia, the first stop on the journey south for Venezuelan refugees and the country where most of them stay.

Unrest growing in the region

That very same day, violence erupted in Brazil's Pacaraima municipality, which borders Venezuela in the Amazon rainforest, and is home to some 12,000 people. Outrage over the murder of a local merchant, allegedly committed by Venezuelan migrants, led an angry mob to destroy a refugee camp and chase more than 1,000 Venezuelans refugees back across their country's border.

The UN High Commission for Refugees has said that incidents such as the one in Pacaraima have also occurred in other countries in the region and warned that Venezuela's humanitarian crisis could generate tensions on a large scale in South America.

By UN estimates, 2.3 million Venezuelan men and women have now fled their homes. The Brazilian government says 50,000 have sought refuge in their border state of Roraima since 2017. Between 547,000 and 560,000 have crossed into Ecuador on their way to Peru and Chile, but 20 percent of those did not finish the journey and settled in Ecuador, according to the International Organization for Migration. 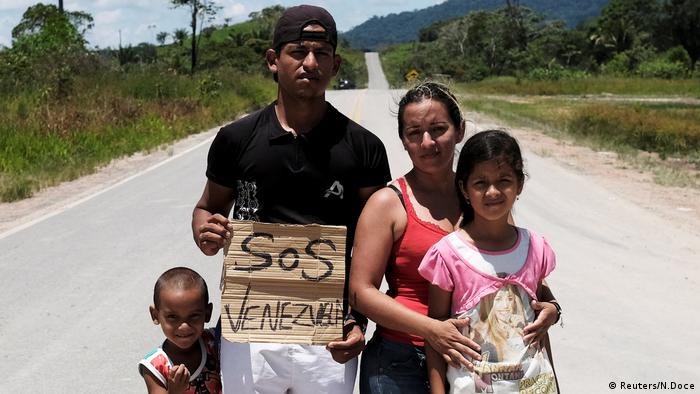 Peru is the nation with the second-highest number of Venezuelan refugees after Colombia, which has opened its doors to 1.5 million people and whose border sees 35,000 crossing of needy Venezuelans per day.

Chinese and US relief efforts

The US Agency for International Development (USAID) has pledged an upcoming $6 million (€5.2 million) in fresh funds to Colombia's new government, to help needy Venezuelan refugees in its territory. So far, of the $56 million in total that USAID has provided to Latin America to stem Venezuela's refugee crisis, $32 million has gone to Colombia alone.

Venezuelans at home have not benefitted from any of this assistance, as the Maduro regime has refused to acknowledge the gravity of the crisis, repelling humanitarian aid from international organizations with the argument that relief efforts are a pretense for military intervention against his regime.

Read more: Opinion: Venezuela on the verge of imploding

Meanwhile, the US Department of Defense confirmed on Monday that it would send its Navy medical ship, the USNS Comfort, to the coast of Colombia to provide help to Venezuelan refugees. But the vessel's arrival was set to coincide with another medical aid ship, the Chinese He Ping Fang Zhou, which is set to arrive in Venezuelan waters, welcomed by the Venezuelan government. Analysts have reacted with apprehension at the simultaneous relief efforts.

Sebastian Huhn of the Institute for Migration Research and Intercultural Studies at the University of Osnabrück was among them. "It is problematic that global powers with competing interests would take a stance on the issue of Venezuela without any joint coordination,” Huhn told DW.

Thomas Fischer, Latin America historian at the Catholic University at Eichstätt-Ingolstadt, agrees. "Although medical vessels are not warships, they can be re-purposed for military maneuvers, if an event merited it. All it takes is one vessel to approach territorial waters where it does not have authorization to do so.”

For this reason, Fischer notes that the ideal situation is one where the US and China deliver their aid to Venezuelan refugees through the UN and not "unilaterally.”

Ultimately, the risk of some kind of confrontation between the US and Chinese medical fleets in Latin American waters remains low, says Günther Maihold, deputy director of the German Institute for International and Security Affairs. Instead, Maihold told DW that the aid they provide is minimal, "given the dimensions of the migration phenomenon and the structural factors that have caused it.”

Maihold also says that each country's domestic interests remain at the fore. The US hopes to deter Venezuelans from fleeing to Miami, while China is in the Caribbean to prove its geopolitical commitment to the region.

Currently, the policies of China, the US, and Latin American countries lack coherence and are mostly reactive. But all three experts agree that the solution to the Venezuelan problem can only be found through a concerted multilateral effort. The critical question for the region is how to stop Venezuelans from leaving their own country in the first place.

"Ecuador and Peru can choose to close their borders, but this will not stop the flow of Venezuelan refugees. They will continue to be forced to flee a life in their country that is simply unbearable,” Huhn said.

The onus is on Latin American nations, who have the most at stake in the crisis, to craft a joint humanitarian policy. Without it, Maihold warns, the entire region will continue to feel "the ravages of the Venezuelan exodus.”

Venezuela arrests 6 for attempt to kill President Maduro with drones

Authorities have detained six people accused of using explosives-laden drones in a failed bid to assassinate Venezuelan President Nicolas Maduro, officials say. They have been accused of "terrorism." (06.08.2018)

In a bid to cushion the impact of the US ban on Russian oil imports, Washington is aiming to help increase production in countries like Iran, Saudi Arabia and even heavily sanctioned Venezuela.