Venezuela arrests 6 for attempt to kill President Maduro with drones

Authorities have detained six people accused of using explosives-laden drones in a failed bid to assassinate Venezuelan President Nicolas Maduro, officials say. They have been accused of "terrorism." 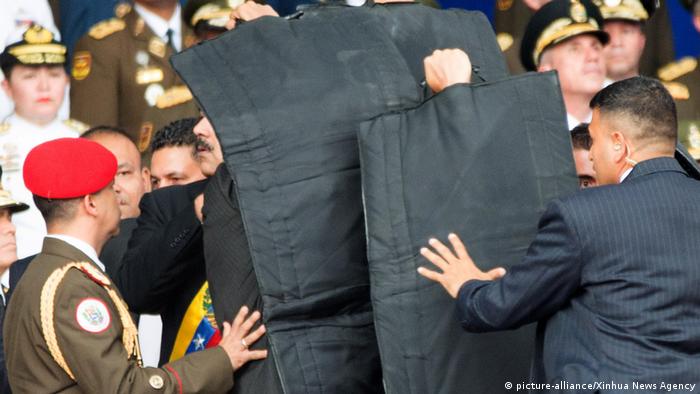 Without offering evidence, the government has alleged that the opposition has conspired with enemies in the United States and Colombia.

"In the next hours, there could be more arrests," Interior Minister Nestor Reverol said late Sunday.

On Saturday Maduro addressed Venezuelans at a parade to honor the Bolivarian National Guard, which the opposition blames for 125 deaths during four months of civil unrest in 2017.

The president had just begun warning citizens that those who failed to register their cars in a national census would miss out on subsidized fuel, when an explosion above his head took away his attention. "What happened?" Maduro wondered aloud, looking upwards worriedly as his wife, Cilia Flores, flinched and bodyguards jumped in to shield the president; "shelter him!" someone shouted. 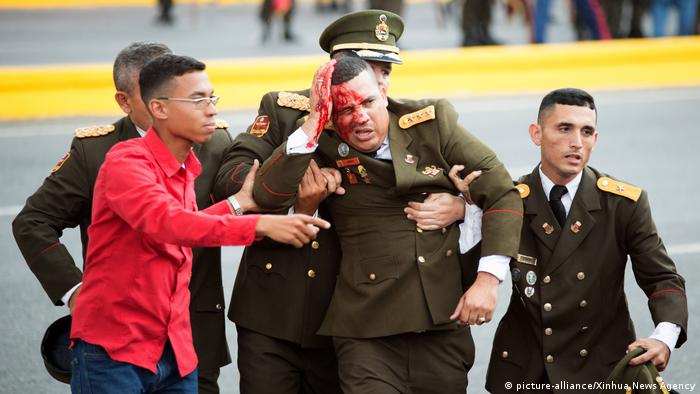 Members of the guard were injured

A little-known group calling itself "Soldiers in T-shirts" claimed responsibility for the attack, announcing that it had planned to fly two drones loaded with explosives at the president, but soldiers shot them down. News agencies could not independently identify the authenticity of the message, and the organization did not respond to a message from The Associated Press.

Maduro blamed the "far right," supported by the US and Colombia — including President Juan Manuel Santos. Officials in Bogota have vehemently denied any role in the reported drone attack.

Calling Maduro's government autocratic, the United States and other countries have slapped economic sanctions on a growing list of high-ranking officials. Concerns over Venezuela's worsening economic and humanitarian situation are growing.

Opposition leaders decried Maduro for broadly singling out his political opponents, and they warned that he could use the incident to further suppress his critics. The Broad Front, a coalition of opposition groups in Venezuela, accused the government of making its allegation without proof. "It's evident that the initial reaction of the government isn't aimed at attempting to clarify what happened, but rather to take advantage of the situation and irresponsibly and sweepingly attack the 'opposition,'" the group wrote in a statement.

Maduro, who also says the United States supports his political opponents, called on President Donald Trump to hold the "terrorist group" accountable. "This was an attempt to kill me," he said.