In a bid to combat hyperinflation, Venezuela has unveiled new paper money with five fewer zeros. It comes after the IMF warned that the nation's inflation could reach one million percent this year. 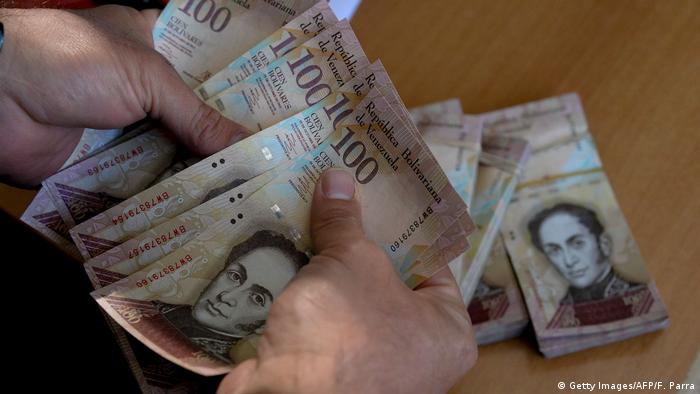 Venezuelan President Nicolas Maduro on Wednesday announced the removal of five zeros from the country's currency — two more than originally planned — as the government struggles to control a relentless rise in inflation.

The new bills will begin circulating on August 20.

Maduro previously said new bolivar bills with three zeros fewer would enter circulation on August 4 — a measure already pushed back from June 4 at the request of banks.

The latest measure, according to Maduro, seeks to "protect" local currency. "Five zeros fewer, so that we may have a new, stable financial and monetary system," he said.

The president said the monetary conversion will spark "great revolutionary changes in the economy, which Venezuela demands."

Venezuela sits atop the world's largest proven oil reserves, but it is five years into an economic crisis with shortages of food and medicine that is driving mass migration.

President Maduro, who won a second six-year term as president in May despite the deep economic crisis, blames the poor state of the county's economy on an economic war that he says is being waged by the United States and Europe.

The IMF also projected the Venezuelan economy to contract by 18 percent this year amid falling oil production.

On Wednesday, Maduro spoke on national television to his economic team, also vowing a renewed focus on Venezuela's failing oil sector, but providing no details for improving crude production.

For ordinary Venezuelans, paper money is hard to get. The largest bill in the country today is the 100,000-bolivar note, equal to less than 1 cent on the commonly used black market exchange rate. A simple lunch easily costs 3 million bolivars.

Venezuela's real GDP is expected to shrink by 18 percent in 2018, marking five consecutive years of declining growth. The IMF said that Venezuela's hyperinflation forecast is similar to that of post-WWI Germany. (24.07.2018)

A new resolution in the European Parliament is calling on EU countries to give refuge to migrants from Venezuela. The UN's migration agency estimates that 200,000 Venezuelans are already living in Spain. (06.07.2018)