The South American country is spiraling further into a humanitarian disaster spurred by the government's economic policies, which have caused inflation to skyrocket 24,571 percent in the past 12 months. 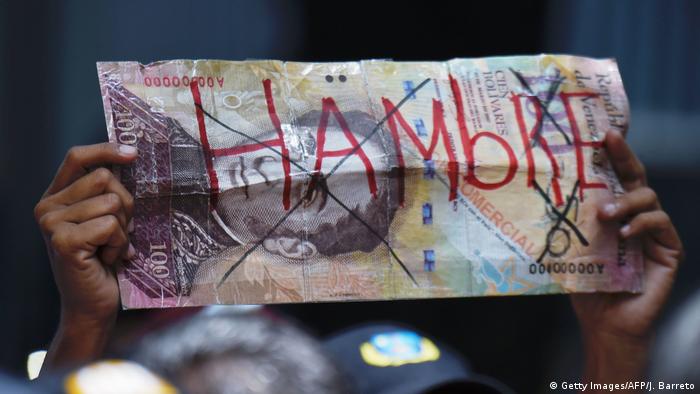 The opposition-dominated Venezuelan parliament issued fresh economic data on Monday, showing that inflation for the month of May spiked 110.1 percent compared with April, and sending annual inflation to a staggering 24,571 percent.

With daily inflation running at 2.4 percent, the country's currency, the bolivar, plunged about 98 percent in the course of the past 12 months alone.

"It's a tragedy that we are experiencing every day," said the parliament's finance commission spokesman Rafael Guzman as he revealed the latest figures.

Opposition politicians in the South American country blame the socialist government of President Nicolas Maduro for the massive economic crisis. Years of mismanagement had led to widespread shortages of food and medicine, they said, and had caused the oil-rich country and its state-owned oil company PDVSA to default on some of its debt.

The government says US sanctions and financial speculators have caused the economic crisis to worsen in recent months.

While parliamentary leaders have called on the government to abandon 15-year-old currency controls and stop printing money, hyperinflation is devastating Venezuelans, whose salaries often are not enough to pay for one meal a day.

Worried by growing discontent, the Maduro government nearly doubled the minimum salary in May, raising it to 2.5 million bolivars per month.

But the hike seems to have poured only more gasoline on the flames of hyperinflation, as consumers rushed to buy the few products available in stores and thereby drive prices even higher.

The International Monetary Fund has forecast that Venezuela's hyperinflation will top 13,800 percent this year, but some lawmakers believe it could be at least 100,000 percent and possibly 300,000 percent.

As of June 12, it took 79,900 bolivars to buy an American dollar. At the beginning of April, a dollar was worth 41,000 bolivars. And at the start of this year, it only took 3,100 bolivars to buy a dollar, according to DolarToday, a website that tracks the unofficial exchange rate.

Millions of Venezuelans look at DolarToday or another site, Paralelo Venezuela, to find out how much money they need to buy groceries. The government's official exchange rate has been deemed meaningless.

Under efforts to stem the financial hemorrhage, the Venezuelan government in February launched its own cryptocurrency, the petro, claiming it is backed by the country's oil and mineral reserves. The move is also aimed to circumvent US sanctions and secure access to international financing.

The cryptocurrency community's response was generally negative, with economists saying it would further fan inflation and government control being its greatest weakness. Maduro has claimed to have raised the equivalent of over $3.3 billion in the Petro pre-sale. But the validity of the figure has been called into question other world governments and the crypto community.