Hyperinflation in Venezuela has made money so worthless that artists make handbags out of the country's currency. Their work adds far more value to the pitiful bolivar, reports Manuel Rueda from the Colombian border. 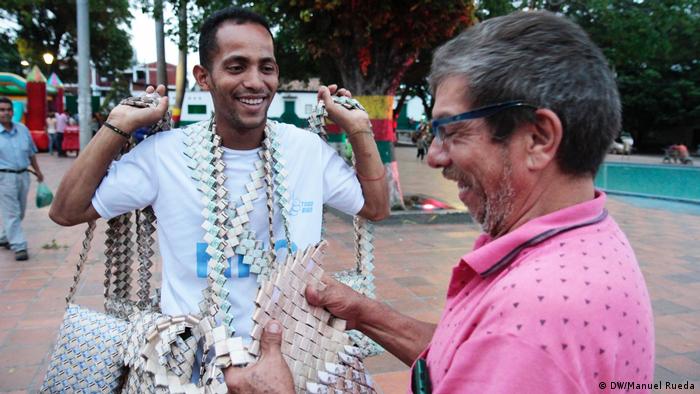 As the sun sets in the sizzling border town of Cucuta, Colombia, Jesus Campos and his wife Gabriela, leave their humble home with several purses hanging from their necks.

The couple, from neighboring Venezuela, walks through a local market and a public square, trying to sell a bunch of colorful handbags and wallets they've carefully stitched together throughout the day.

But these are not your regular accessories: Each purse is made out of 800 Venezuelan bolivar bills that have been tightly folded and woven together into a large rectangular pocket. Each wallet is made with 200 pieces of Venezuela's increasingly worthless currency.

Campos says that the bolivar bills he uses to make one purse couldn't even buy him a large soft drink in Venezuela. In Colombia, he sells his large handbags for around $10 (€8.40), enough to buy a kilo of beef, a loaf of bread, some vegetables and the soda bottle he couldn't cover afford at home.

"Sometimes people ask me if these are made with photocopies of bolivares," Campos says holding one of his purses. "But that wouldn't be profitable. It's cheaper to use the bills themselves."

A monthly wage for a kilo of beef

The bolivar bags show just how creative some Venezuelan immigrants have become as they struggle to make a living abroad.

But the accessories are also a dramatic example of how extreme inflation has become in Venezuela, where a prolonged economic crisis is forcing thousands of people to leave the country each day. 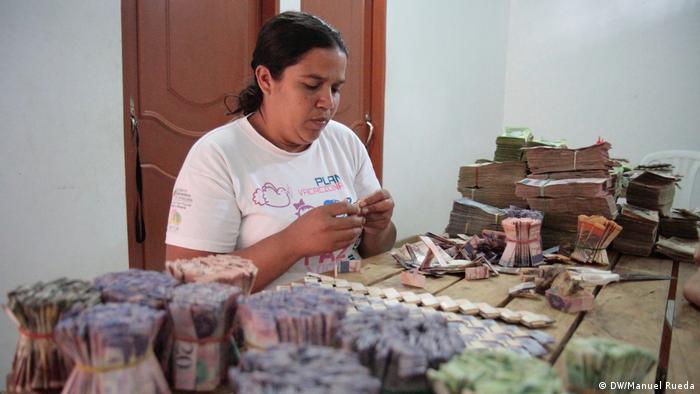 According to Steve Hanke, a professor of applied economics at Johns Hopkins University in the United States, inflation rose by 16,000 percent in Venezuela over the past 12 months.

Venezuela's Central Bank has not published inflation statistics since 2015, which critics have described as an effort to hide the seriousness of the problem.

But the bolivar's increasing worthlessness is clear to anyone who takes a glance at supermarket shelves in the South American country. A kilo of beef now sells for 2.7 million bolivares, or about the same as the country's monthly minimum wage. A cup of coffee, which cost around 2,000 bolivares a year ago, now sells for 200,000.

This hyperinflation, coupled with food shortages and growing crime, is causing people to flee to nearby countries like Colombia, Ecuador, Brazil and Peru, in what is quickly turning into a South American refugee crisis. According to the International Organization for Migration, more than 1 million Venezuelans have left their country since 2015.

Jesus Campos says that when he immigrated to Cucuta four months ago, he started to sell rice pudding to Venezuelans who cross into Colombia each day, looking for food, medicine and work. Campos sold the desserts for 45,000 bolivares, but sometimes, his customers paid him with bags full of 100 bolivar notes.

"Many exchange bureaus would not accept those bills … so that's when it occurred to me that I could turn them into something more useful," Campos said.

Campos already knew how to make handbags out of discarded cigarette packets and magazine paper. So he started to use bolivar bills instead.

"We work hard making these bags," he said at his apartment as he put the final stitches on one of his purses. "But now we have enough money to feed ourselves and pay our rent."

Beauty in time of crisis

Campos isn't the only artist using bolivar bills as his raw material.

In the Venezuelan town of San Cristobal, they are the canvas for graphic designer Jose Luis Leon. His drawings on the bills in marker and nail polish depict current events, Venezuelan tourist spots and popular Japanese cartoons. He posts photos of his finished works on Instagram for the world to see. 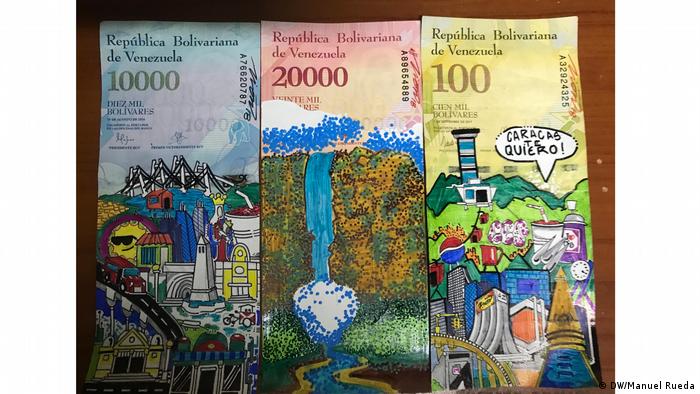 The 25-year-old artist has sold his pieces for up to $100 to customers living in the United States, but also sells works within Venezuela for amounts that range from $2 to $20. He's even had one of his pieces exhibited at an art gallery in Caracas.

"These drawings evoke a critical moment in Venezuela's history," Leon says. "They also show you that you can make something beautiful out of something that is now worthless."

Venezuela's bolivar bills have become so worthless in fact, that, as the country prepares for a presidential election on May 20, critics of President Nicolas Maduro are throwing 50, and 100 bolivar bills at crowds during opposition campaign rallies, as a playful way of protesting how Maduro has "destroyed" the country's currency.