Venezuela's economic crisis as left the country's health system on the verge of collapse. Amid a shortage of medication, HIV patients are succumbing to secondary infections, despite doctors' best efforts. 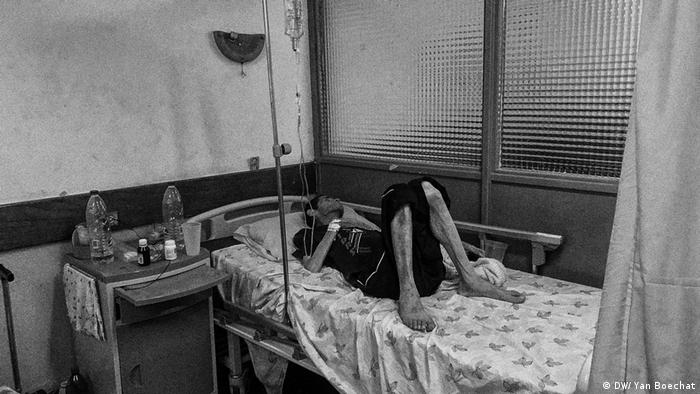 Alejandro Ortega's body is covered with round, dark spots. The 21-year-old's hands, arms, feet and even his face appear as though they are marked with scars that have not properly healed. "Don't worry, it's not contagious," he said, extending his arm to shake hands.

Alejandro's doctor at the Venezuelan Central University clinic in Caracas explained that the spots have been caused by a fungal infection transmitted through pigeons.

"It's safe for most people, because their immune system can handle it," the doctor said. "But for people like Alejandro, who are HIV-positive and have not been taking antiretroviral drugs for months, it can be fatal."

With his emaciated body, pale face and skin covered in lesions, Alejandro is suffering as many patients afflicted with the human immunodeficiency virus (HIV) that causes AIDS did in the 1980s, before antiretroviral medication was introduced. The dark patches look like Kaposi's sarcoma, a cancer that occurs mainly in connection with HIV/AIDS and was very common among the first people infected with the virus when the global epidemic began nearly four decades ago.

"It looks the same, but what Alejandro has is, in fact, only a skin infection," said the doctor, who prefers to remain anonymous in order to avoid any problems with the government.

Alejandro is one of about two dozen HIV patients who are being treated at Venezuela's largest center for the virus. Nearly all are suffering from the same problem: They have caught secondary infections because they can no longer take the drug cocktail known as highly active antiretroviral therapy (HAART). This breakthrough treatment was introduced in 2000 and prevents HIV from developing into AIDS.

The likelihood of the virus being transmitted from a mother to her newborn child can also be significantly reduced by the use of antiretroviral medication. But currently in Venezuela, such treatment is almost impossible.

"The situation that most patients are in is similar, or perhaps even worse, than it was 30 or 35 years ago," said Martin Carballo, the clinic's director. 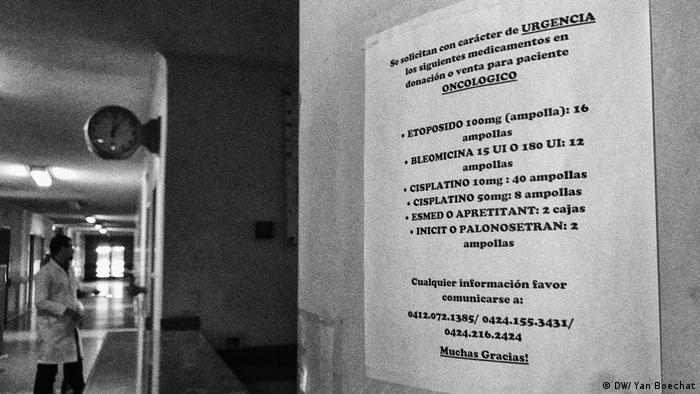 'This is a tragedy'

Roughly two years ago, when rapidly falling oil prices transformed Venezuela's economic crisis into a humanitarian catastrophe, the government began importing fewer medicines. At first, only simple drugs were affected, then it was antibiotics and even anti-inflammatory drugs. For the last year, patients afflicted with chronic illnesses that require expensive medication have been suffering under the government's reduced medicine import scheme.

The lack of medication to treat HIV first became a problem at the end of 2016. But the situation turned critical last year, Carballo explained.

"This is a tragedy," he said. "Not being able to take the right drugs is like a death sentence for many people. We've been missing the medications in the clinic for over four months, some of them we haven't had in six months."

The doctors at the Caracas University hospital are facing an ethical dilemma. Some argue that the clinic should not accept any new seriously-ill HIV patients, because they cannot be treated. It is not just antiretroviral medication that is lacking, it's everything: From gloves and syringes, to antibiotics and painkillers.

"We have reached our limits, and we can't even help people here to die with dignity," said Maria Eugenia Landaeta, head of infectious diseases at the clinic. "We can't offer anything to the sick except the will to help and our medical expertise. We even have to ask the patients to bring drinking water from home." 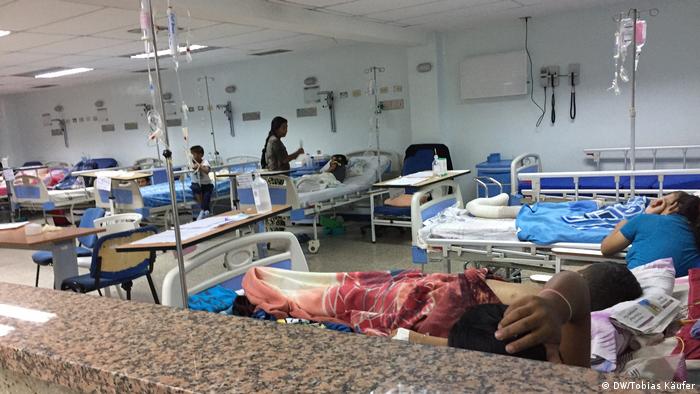 Nothing to work with

Another patient, named Jorge, has stopped speaking. Most of the time, his eyes are fixed on a point in the room where the sun is shining on the wall. He is covered by a thin scarf and his emaciated legs are visible, as is the adult diaper he is wearing. Jorge's face is deathly pale; his dry mouth hangs open.

"He's dying, it's all over. They've killed him," said his sister Sol Reys.

It is the third time Jorge has been hospitalized in the last eight months. When ingredients for the anti-AIDS drug cocktail became scarce, Jorge's condition rapidly deteriorated.

"He's been ill for many years and has had relapses. But now the situation is really hopeless," Sol Reys said, as she swatted away a mosquito trying to land on her brother's forehead. "Cleaning products, diapers, painkillers, food — my God, even water — I have brought in everything that Jorge has here."

The situation that Jorge and Alejandro are facing is not unique in Venezuela.  Even contraceptives have practically disappeared from the shelves, or become so expensive that the average Venezuelan can no longer afford them. In 2016, the government stopped distributing condoms among the population, and the price of buying them in the pharmacy has reached 20-30 percent of the monthly minimum income.

"This is a very serious problem, there is simply no more birth control," said Nubia Laguna from Nina Madre (Mother Girl), a nongonvernmental organization that supports young mothers. "We do not know at the moment how widespread sexually transmitted diseases are in the country, because there have been no official figures on the part of the state for more than two years." 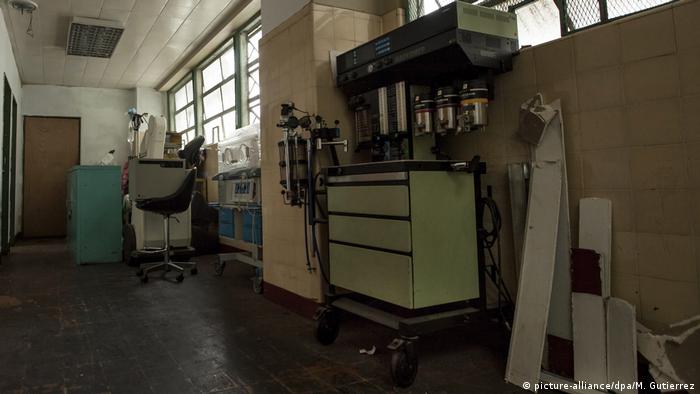 Unused medical equipment in a corridor of Caracas Teaching Hospital

There are dozens of people, sometimes over 100, queuing in front of the Caracas University hospital's outpatient clinic every day.

"Previously, there were five to 10 patients with suspected HIV," said Landaeta. "Today there are twice as many. Everyday."

A further difficulty is that the hospital lacks the means to carry out HIV tests.

"Hardly any Venezuelan can nowadays find out whether he or she is HIV-positive under the public health system. You have to pay extra for a test," said Davi Flora, who also works at the university hospital. "And if we don't even know whether the patient is HIV-positive and if so, how much of the virus has spread to him, we can't start treatment."

Alejandro knows he's running out of time. Without the proper medication, there's not much the doctors can do for him.

"I'm afraid of getting to a point where there's no cure," he said. This has happened in recent weeks with other patients. "I see people dying here. But I'm still young, I want to live and I know I can, with the right medication."

On his bad days, waiting for the drugs and struggling against the infection, Alejandro finds comfort in reading the Bible. His favorite verse is Jeremiah 33:6: "Nevertheless, I will bring health and healing to it; I will heal my people and will let them enjoy abundant peace and security."