Officials in northern Brazil are demanding federal aid to help manage the influx of people seeking food and shelter. The president promised help while vowing that the country wouldn't turn its back on the Venezuelans. 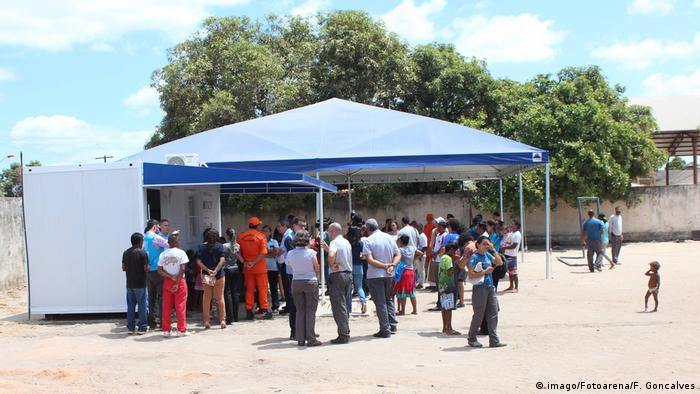 Brazil's president promised Monday to provide whatever aid is necessary to the country's northern state of Roraima, which has been overwhelmed by tens of thousands of desperate Venezuelans fleeing their country's collapsing economy and political turmoil.

Venezuelan President Nicolas Maduro has sought to consolidate power as the country's economy collapses under the weight of a severe recession and hyper-inflation that topped 700 percent last year and could more than triple that figure in 2018.

Some 40,000 Venezuelans have poured into the Roraima capital, Boa Vista, overwhelming local government agencies and infrastructure in the city of 400,000. Many of the displaced Venezuelans are living in the streets.

Brazilian President Michel Temer interrupted his Carnival vacation to fly to Roraima on Monday, where he promised a federal task force will work with the state to resolve the crisis situation.

"I will not rest until we have solved the problems of Roraima," Temer said during a meeting with the governor and various state and federal officials. "All necessary resources will be sent to solve this Venezuelan question."

The president suggested that some migrants could be moved to other states, but insisted that Brazil would not turn its back on the people fleeing misery.

Defense minister Raul Jungmann later said that the army would set up a field hospital along the border and work with local officials to build triage centers, the G1 news portal reported.

There are growing fears among local residents that the Venezuelans will take jobs away from Brazilians, who are concerned about their own country's lackluster economy.

Two residences housing Venezuelans were set alight last week — five people were injured. A local man has been arrested in connection with the attack.

The Roraima government gave federal officials a list of demands last week, including equipment, vehicles and its own security forces. Temer's government has so far agreed to double the number of federal security forces at the border to 200.

Read more: Venezuela is a country in meltdown

Many of those entering from crisis-hit Venezuela have walked hundreds of kilometers to reach Boa Vista, but have largely been left to sleep in public squares and other precarious parts of the city.

After his meeting with local officials Temer reaffirmed that the government will not block Venezuelans from entering but it may try to organize the flow.

Brazil has expelled Venezuela's charge d'affaires, a retaliatory move after its envoy was expelled last week from Caracas. Canada has also ordered Venezuela's ambassador to leave his post. (27.12.2017)

At least 18 people have been killed in a confrontation between security forces and illegal miners in eastern Venezuela. The mineral-rich region sees frequent clashes between rival gangs seeking to control gold deposits. (12.02.2018)

WorldLink: Venezuelans turn to Chile for a new life