A guide to military drones

Every military specialist agrees that Unmanned Aerial Vehicles, or drones, are the future of warfare - but what are the major types of drone and who makes them? DW explains. 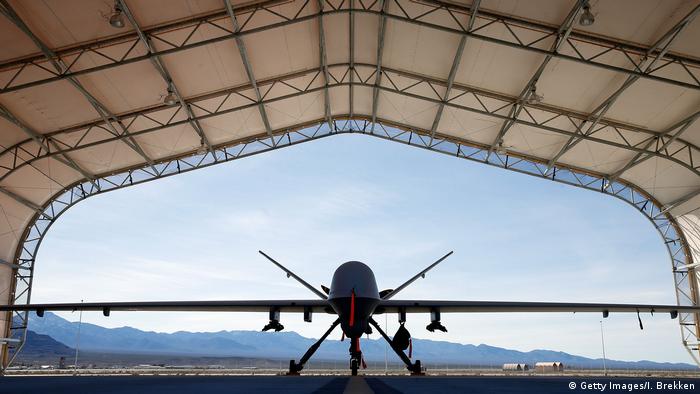 The research and development departments of the world's defense companies have barely begun to explore all the different uses for Unmanned Aerial Vehicles (UAV), or drones.

And governments, aware of this, are growing increasingly keen to find out what else they can do. In early June, the European Commission came up with a new plan to hand out 1.5 billion euros ($1.7 billion) of taxpayers' money to arms companies every year to develop new military technology.

And yet from the handheld Black Hornets to the 40-meter wingspan of the Global Hawk, military drones are so varied that no single company, or even country, dominates their manufacture. And while some 90 countries have drones in their military arsenals, only 11 of these have armed drones. Here are the basic types and where they come from. 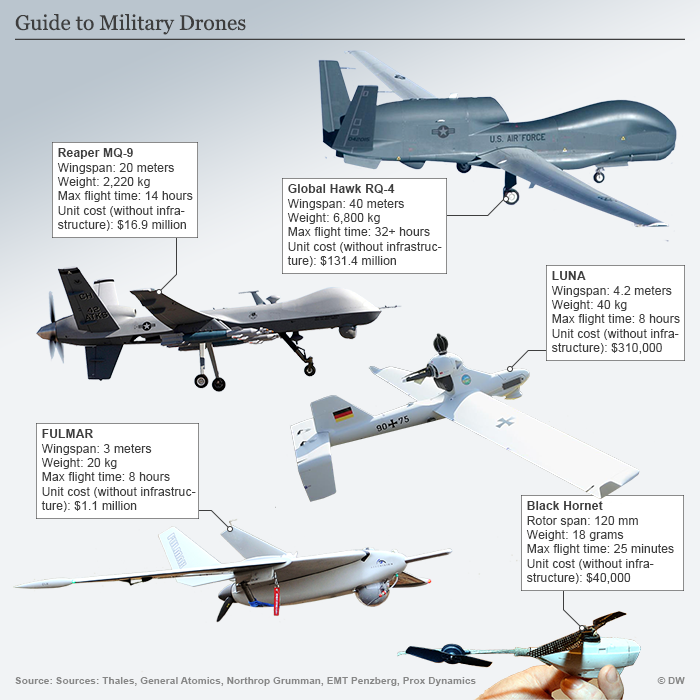 Insect-sized spy machines may have become part of the furniture in blockbuster movies, but they've also been hovering over real battlefields for several years. The most obvious example of such a drone is the 1-inch-by-4-inch Black Hornet, which British soldiers have been using to look over walls and around corners in Afghanistan since 2013. 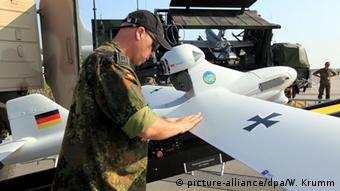 The German military favors the German-made LUNA drone for reconnaissance

Launched from a box kept on a utility belt, the soldier can control the tiny helicopter from a small handheld terminal, which also shows images from its three cameras.

The Black Hornet, manufactured by the Norwegian company Prox Dynamics, can hover for up to 25 minutes on one charge of its battery, and the digital data link to its terminal has a range of up to a mile (1.6 kilometers). In 2014, the company augmented the Black Hornet with night-vision and infra-red.

Even if a soldier can't carry a drone in his pocket, he can toss one up in the air. This would be possible, for example, with the FULMAR, a lightweight surveillance drone that flies for around 12 hours and a range of 90 kilometers, depending on what it is carrying. 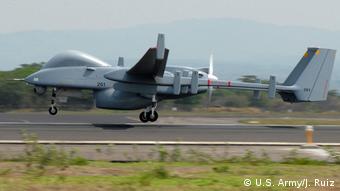 The vast majority of military drones, the "work horses," as Ulrike Esther Franke, drone expert at the European Council on Foreign Relations, calls them, are medium-sized, medium-range flying robots used for ISTAR purposes.

One of the key drones in this class is the Heron, made by the Israeli Aerospace Industries (IAI) - some of which the Bundeswehr is intending to lease. This drone, which weighs over 1,000 kilos and has a wingspan of over 16 meters, can fly for up to 52 hours at a height of 10,000 meters (35,000 feet) - around the same height as a commercial airliner. The US, Canada, India, Turkey, Australia, and Morocco have all bought Herons for tactical and reconnaissance use.

The German military also uses the LUNA, made by the German company EMT Penzberg. This reconnaissance drone, which the Bundeswehr has relied on for several thousand hours of flight time in Afghanistan and Kosovo since 2000, is much cheaper than the Heron, but its range is only around 100 kilometers. Pakistan and Saudi Arabia have also bought LUNAs. 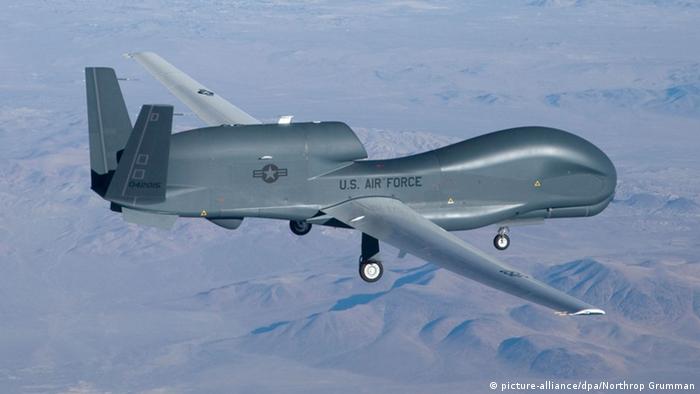 The Global Hawk is the biggest military drone, used mainly for surveillance

Probably the most well-known military drones are the large-scale combat drones used by the US, which are all operated from US soil by pilots via a satellite link-up. The Predator, and its larger, newer cousin, the Reaper, both MALEs made by the US firm General Atomics, are armed and used for controversial extrajudicial killings in countries where the US is not officially at war.

Reapers can be armed with various air-to-surface missiles, as well as laser-guided bombs, have a range of over a thousand miles and a maximum non-stop flight time of 14 hours. Apart from the US, several other NATO air forces operate Reapers, including those of the UK, Spain, France, and the Netherlands. The Chinese-made rival, the CH-4, which looks very similar to the Reaper, has been bought by Egypt and Iraq.

The Global Hawk, meanwhile, made by the US firm Northrop Grumman, boasts some spectacular ISTAR capabilities and is by far the largest and most expensive of the drones. Unit costs have reached $131 million, even without the ground infrastructure. The Global Hawk flies above commercial air traffic at an altitude of up to 18,000 meters.

Though it is usually used over conflict zones, the Global Hawk's main purpose is not even necessarily military - it is capable of signals surveillance - in other words, scanning mobile phone calls.

Though Northrop Grumman is the only company that currently produces drones of this size, it is likely to face competition in the future, especially from the Chinese CH series, made by the China Aerospace Science and Technology Corporation (CASC). Europe is also developing its own version of the Global Hawk, the Euro Hawk, though the program was initially cancelled because of spiralling costs and problems gaining flying permission in German airspace.

Forty-five countries have agreed to set out international standards for the use of military drones. Notable absentees from the declaration include France, Russia and China. (06.10.2016)

An American drone base has taken up operations near the city of Agadez in Niger. It is considered strategically important in the fight against Islamists in western and northern Africa. (23.11.2016)