Forty-five countries have agreed to set out international standards for the use of military drones. Notable absentees from the declaration include France, Russia and China. 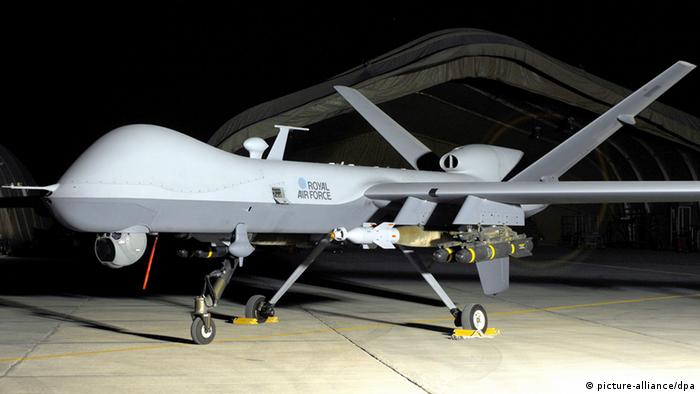 Iran's military has warded off a US military drone it says had violated its airspace. The alleged incident came the same day Iran inaugurated a new Russian-made air defense system around a sensitive nuclear site. (29.08.2016)

US publishes its 'playbook' for military drones

The USA has published guidelines for its controversial use of drones, and has given a glimpse of its overall strategy. But critics say that it isn't enough. (09.08.2016)

White House policy on US drone attacks abroad require "near certainty" that a terror suspect is present and that civilians won't be injured or killed. Disclosure was obtained by the American Civil Liberties Union. (07.08.2016)

Germany is among the 45 countries that issued a joint declaration on Wednesday regarding the use and export of military drones.

The declaration, released by the US State Department, calls on the international community to "take the appropriate transparency measures to ensure the responsible export and subsequent use" of armed drones.

The joint declaration on the "Export and Subsequent Use of Armed or Strike-Enabled Unmanned Aerial Vehicles (UAVs)" stipulates that international laws on armed conflict and human rights should apply to the deployment of drones. Meanwhile, export controls should be consistent with the existing multilateral export controls and nonproliferation regimes.

It also aims to prevent drones from falling into insurgent hands, citing that this would "fuel conflict and instability, and facilitate terrorism and organized crime."

Along with Germany, Britain and Australia were the other key US allies that signed up to the agreement. They were joined by a host of nations from Europe, Africa, South America and Asia.

Mike Toner, the US State Department spokesman, called the document "an important first step towards comprehensive international standards for the ... use of UAVs."

States that have signed up to the agreement will meet up next year to discuss a more detailed set of standards. All countries would be welcome to the talks, regardless of whether they intend to join the convention or not, Toner said.

The US military drone program has become an everyday part of its war effort against insurgent groups in the Middle East. It frequently deploys UAVs in Syria, Iraq, Yemen, Pakistan, Afghanistan and other countries.

US Air Force data for 2015 showed that American drones fired more weapons in Afghanistan than conventional warplanes, with the ratio continuing to rise.

US troops have withdrawn from Afghanistan - with heavy emotional baggage. Many veterans are suffering from PTSD.