The German Defense Ministry is desperately trying to salvage something from its expensively mothballed Euro Hawk drone. But now it seems that might cost even more than the initial project. Ben Knight reports from Berlin. 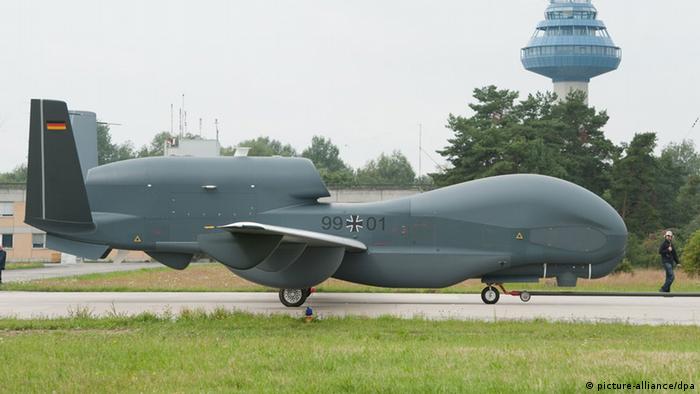 It weighs 7 tonnes, has a wingspan wider than most commercial airliners, and almost cost the previous German Defense Minister, Thomas de Maiziere, his job.

The Euro Hawk surveillance drone also cost the German taxpayer more than half a billion euros before it was cancelled in 2013 after a decade of development and testing, because there was no guarantee it could get the necessary certification from aviation authorities.

Now it seems that to salvage anything from the project the German army will have to sink another half a billion euros into it. That news came last week courtesy of Tobias Lindner, a Green party Bundestag member who submitted an official parliamentary information request to the Defense Ministry.

In its response, the ministry admitted that in 2014 and 2015 it had signed deals with the US Navy to test the feasibility of fitting the surveillance system developed for the Euro Hawk (called ISIS - or Integrated SIGINT-System) into the US Navy's Triton drones. That of course means that the Bundeswehr would have to buy some Tritons of its own. "How much would that cost?" Tobias Lindner wanted to know. 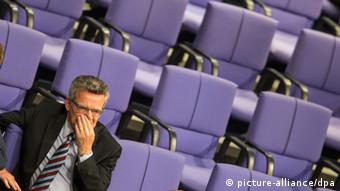 De Maiziere mothballed the Euro Hawk in 2013, after it cost half a billion euros

The government's reply: "The initial cost estimate of the US Navy from May 2014 for three Tritons, including all operationally necessary system components, such as e.g. ground station, is $648 million [600 million euros] (not including import sales tax and customs duties)."

Cart before the horse

On top of that, Lindner wondered, how much would it cost to integrate ISIS into the Triton drone? "Around 255 million euros," came the reply.

Lindner was on the Bundestag's committee inquiring into the initial Euro Hawk debacle of 2013. "I was always very skeptical about de Maiziere's theory that all that money wasn't wasted, because at least they got a fully developed surveillance system out of it," Lindner told DW. "Now we are being told, bit by bit, that the whole project will be much more expensive."

Lindner has doubts about the economic wisdom of having a finished surveillance system without knowing which drone it would fit into. "Before they finished the surveillance module, the so-called ISIS module, they should have thought about whether they even have a carrier platform which we can use with it," said Lindner. "They're taking the second step before the first, so to speak."

This is especially the case since the ministry says that it is also looking into other options for its surveillance project. In its answer, the government mentions the "Global 5000" as an alternative, an aircraft made by the Canadian engineering giant Bombardier. This, as Lindner points out, is a totally different airplane. It's not a drone, for one thing. 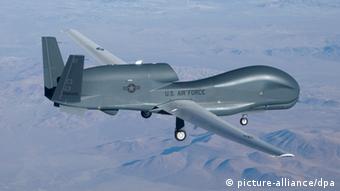 The Global Hawk is NATO's version of the Euro Hawk

The future of warfare

But even Lindner agrees that the Bundeswehr needs some kind of long-range surveillance system. If it is ever sent on a mission, the Euro Hawk - or the Global Hawk from which it is derived - will be capable of flying over land or sea for long periods of time (according to its maker Northrop Grumman, the Euro Hawk can stay in the air for over 30 hours) to collect mobile phone signals and provide radar ground surveillance in real time.

NATO is currently creating its own new "Alliance Ground Surveillance" (AGS) system, and when it is ready, the alliance claims, it will be used for "protection of ground troops and civilian populations, border control and maritime safety, the fight against terrorism, crisis management and humanitarian assistance in natural disasters." The future of warfare, it seems, is unmanned.

"The fear about the future is that the threat will be so fast and so immediate, both in terms of asymmetric, terrorist-type threats and classic military-on-military threats, that the speed to interdict will be a critical factor - and that means as much automation as possible," says John Louth, director of the defense, industries and society program at the UK-based Royal United Services Institute. "There are huge issues with that of course - there are ethical issues, governance issues - but that is the clear direction."

And there are more immediate technical issues too: specifically, getting past Europe's flight safety standards. As part of the AGS project, NATO is testing the Global Hawk RQ-4B from Sigonella, on Sicily - a project to which the German army has contributed another half a billion euros. Now it has emerged - thanks to another Bundestag question, this time from the Left party - that the Global Hawk is grounded too. The reason? Gaining permission from Italian aviation authorities "has been delayed by several months." The exact same problem that bedevilled the doomed Euro Hawk.

At a committee hearing last month, Defense Minister Ursula von der Leyen appeared to criticize her predecessor. This time, both were present. While the pair did express unity, it was seen as somewhat brittle. (10.06.2015)

Defence Minister Ursula von der Leyen has been criticised for deeming large parts of the country's defence industry as not "vital." And now her ministry is accused of hindering transparency on Bundeswehr troubles. (13.10.2014)

A consultants' report commissioned by Germany's defense ministry has confirmed a series of delays and deficiencies in equipping German armed forces. The experts blame the problem on faulty project management. (06.10.2014)