A consultants' report commissioned by Germany's defense ministry has confirmed a series of delays and deficiencies in equipping German armed forces. The experts blame the problem on faulty project management. 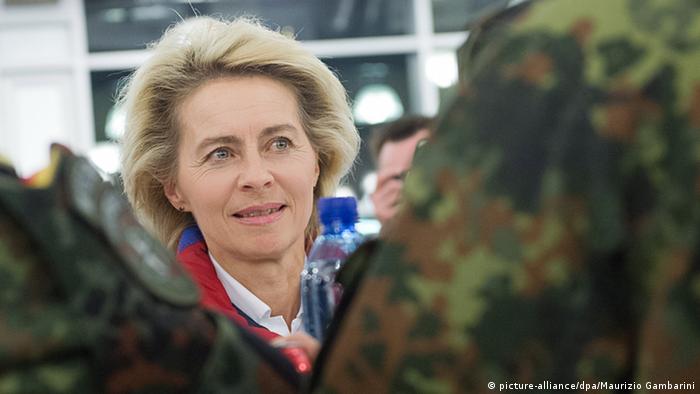 On Sunday, she had insisted that Germany could still play a part in foreign military missions. Currently, 3,617 soldiers are deployed on 18 missions in 14 countries.

Yasmin Fahimi, the secretary general of the Social Democrats who are partners in Chancellor Angela Merkel's coalition, responded to the report on Monday by urging von der Leyen to get a grip on what she called the "chaos in the Bundeswehr."

Concluding the three-month-long study, the consultants - auditors KPMG, the engineering group P3 and the legal firm Taylor Wessling - list 140 problems and risks in projects aimed at better equipping the Bundeswehr.

Nine major projects worth 57 billion euros ($72 billion) were running between two-and-a-half and 10 years behind, often resulting in cost overruns amounting to billions of euros.

The projects examined included the military Airbus A400M transporter, the helicopters Tiger and NH90 and the modern Eurofighter jet.

The consultants conclude that the fault lies in the ministry's leadership culture.

"The management of defense projects requires a corporate culture in which transparency and integrity is lived out," their report said.

In addition, ministerial procurement staff had to set incentives and sanctions when calling for tenders and deal with vendors as legal equals.

The 57-page report calls for reactivation of the Euro Hawk drone to further test its integrated intelligence-gathering system ISIS.

Germany's previous defense minister, Thomas de Maiziere, stopped development of the unmanned aircraft last year because of cost overruns and failure to obtain a license to operate alongside civilian traffic.

'Germany is fighting at a lower weight'

US Congressman Charlie Dent talks to DW about Germany's security commitments, after Defense Minister Ursula von der Leyen admitted that the country would fail to meet its long-term NATO commitments. (30.09.2014)

Defense Minister Ursula von der Leyen has taken a trip to see a Bundeswehr operation not currently halted by technical problems; Kurdish peshmerga fighters are being trained to use German anti-tank weapons in Hammelburg. (02.10.2014)

The German military's controversial combat drone program may take the skies yet again, according to a media report. The much-maligned "Euro Hawk" was canceled last year after a string of setbacks. (05.10.2014)