OAS chief: 'Military intervention' in Venezuela cannot be ruled out 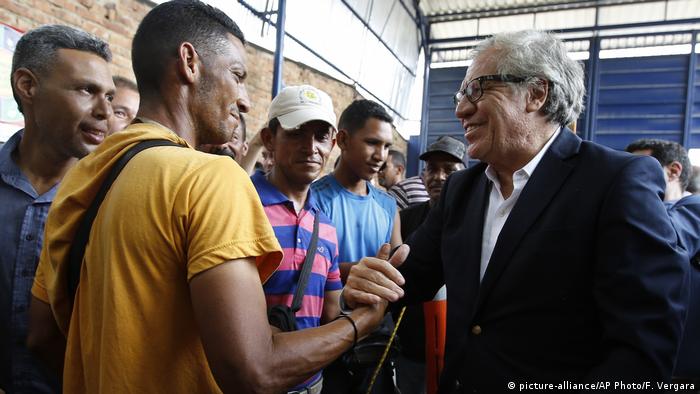 The secretary-general of the Organization of American States (OAS), Luis Almagro, said on Friday that a "military intervention" to "overthrow" Nicolas Maduro's government cannot be ruled out.

Almagro made the remark while visiting the Colombian city of Cucuta, a border city that has borne the brunt of the Venezuelan refugee crisis.

"With regards to a military intervention aimed at overthrowing the regime of Nicolas Maduro, I think we should not exclude any option," the chief of the Washington-based OAS said, adding that Caracas was committing "crimes against humanity" on its people.

Diplomatic actions should come first, Almagro said, but added that the international community "should not rule out any action," given the Venezuelan people's suffering and the exodus that it is driving.

US President Donald Trump made the most recent mention of intervention in Venezuela this year. The president's hawkish suggestion reportedly lacked the backing of his own military and foreign policy establishment.

The prospect of ending Venezuela's crisis by overthrowing the Maduro regime has long been opposed by Latin American nations. A military intervention in Venezuela by its neighbors would be unprecedented in recent times; the countries in the region have not had a full-scale war against each other in over five decades.

The situation in Venezuela and its mass migration is unprecedented in the region's contemporary history.

"This is an immoral crisis," Almagro said on Thursday after meeting with Colombian President Ivan Duque. "And it is marked by the (Venezuelan) government's indolence."

The OAS leader was joined in Cucuta on the border with western Venezuela by the head of Human Rights Watch in the Americas, Jose Miguel Vivanco, and the Colombian foreign minister, Carlos Holmes Trujillo. Their visit was to address the situation of migrants who have fled from oil-rich Venezuela.

Almagro met with aid workers and government officials in Cucuta, where schools and hospitals are struggling to cope with so many people from Venezuela. He lauded the efforts of Colombia and its "open arms" policy towards the newcomers. This ranges from the legalization of 600,000 Venezuelans to making health services available to them.

"The international community is responsible and cannot allow the existence of dictatorship in Venezuela, a dictatorship that affects the stability of the entire region," Almagro said, in an appeal to other countries.

Venezuela has been devastated by a deep economic crisis, which the US says has triggered the departure of 2.3 million people since 2014. According to Colombia's government, almost a million of those Venezuelans are currently living in the country.

Brazil's President Temer has signed a decree that will send troops to Roraima state on the Venezuela border. Homicides have jumped in the area and riots have broken out between locals and Venezuelan migrants. (29.08.2018)

China's president, Xi Jinping, has met with his Venezuelan counterpart, Nicolas Mauro, in Beijing. Maduro is hoping to deepen ties and secure increased financial support from his Chinese ally. (14.09.2018)