China's president, Xi Jinping, has met with his Venezuelan counterpart, Nicolas Mauro, in Beijing. Maduro is hoping to deepen ties and secure increased financial support from his Chinese ally. 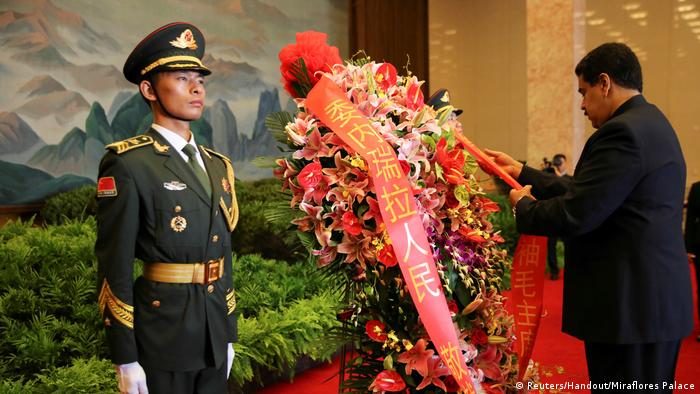 Venezuelan President Nicolas Maduro met with his Chinese counterpart Xi Jinping on Friday in an attempt to secure help from Beijing for his economically-stricken country.

China is Venezuela's main creditor and is "willing to provide whatever help it can offer," Chinese Premier Li Keqiang reportedly promised.

"We began our state visit to the People's Republic of China, paying tribute to its founder, the Great Helmsman, Mao Tse Tung," tweeted Maduro. "His example and revolutionary struggle marked the twentieth century."

Xi told Maduro that China supports the Venezuelan government's "efforts to seek a stable national development," according to Chinese state broadcaster CCTV. "China is willing to strengthen exchanges of experience in governing the country and politics with Venezuela," Xi said.

Hyperinflation: Venezuela has been in a huge recession since Maduro succeeded the late president, Hugo Chavez, in 2013. It has been hit with widespread food shortages, long lines for basic necessities, price hikes and high crime rates. Hundreds of thousands of people have fled to neighboring countries and Spain.

Reforms: Maduro has recently announced a raft of economic measures aimed at bolstering the tanking economy, including a new currency, a 3,000 percent increase in the minimum wage and tax hikes. However, the International Monetary Fund (IMF) projected Venezuela's inflation rate will hit one million percent by the end of the year.