The economic turmoil in Venezuela has led to an exodus from the country. Those who are able to do so travel to Europe. In Spain, Venezuelan asylum-seekers have come to outnumber applicants from everywhere else. 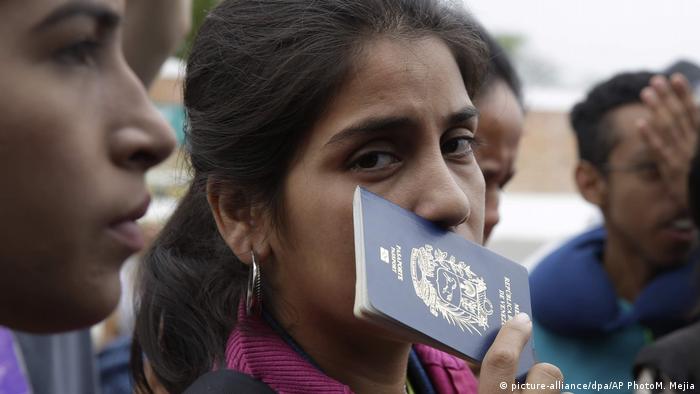 Most of the asylum applications filed in Spain in recent years have come not from African or Middle Eastern refugees, but rather South American nationals. The number of Venezuelan asylum-seekers in particular has risen dramatically.

"For three years now, most of those seeking safety in Spain have been Venezuelan nationals," Maria Jesus Vega, spokesperson for the UN refugee agency (UNHCR), told DW. She noted that Venezuelans filed 4,200 asylum applications in 2016, 10,600 in 2017, and 12,700 so far this year. According Spain's department for asylum-seekers and refugees, OAR, the second-highest number of asylum applications were filed by Colombian nationals, followed by Syrians.

The sudden increase in asylum applications by Venezuelans "is a clear signal how much conditions have deteriorated in the South American country," said Jesus Vega.

The latest report by the European Asylum Support Office shows that only 100 Venezuelans sought asylum in European Union member states in 2014, one year after Nicolas Maduro became the Venezuelan president. By 2017, this figure had climbed to 12,020. For various historical, linguistic, cultural and family-related reasons, Spain is the number one EU destination for Venezuelans fleeing their homeland — provided they have enough money to do so.

The UNHCR estimates that a total of 2.3 million Venezuelans currently live abroad and that 1.6 million of them have left the country since 2015. However, Barcelona-based sociologist Tomas Paez Bravo, who holds Venezuelan citizenship, estimates that 3.3 million of his compatriots are actually seeking a better life abroad at present. He has accused the Venezuelan National Institute of Statistics of keeping the real figures under wraps in order to downplay the ongoing exodus.

Spain's Commission for Refugees has reported that only 1,500 of last year's 10,600 asylum applications filed by Venezuelan nationals were processed — and that of these, only 15 were successful, explained Paez Bravo. "Spain is unable to process the vastly increased number of asylum applications and many applications are rejected — that means large numbers of Venezuelans are forced to live in Spain illegally," he said.

The UNHCR's Jesus Vega noted Eurostat data show that by April 2018, more than 17,700 asylum applications filed by Venezuelans had not yet been processed. "Spain's Interior Ministry has admitted it needs to make more resources available to process applications more quickly," she said.

Jesus Vega believes the influx of Venezuelan asylum-seekers is still manageable for Spain, particularly compared with the large numbers of Venezuelans who have fled to nearby Colombia, Peru and Brazil, but that the slow pace of Spanish bureaucracy has nonetheless forced thousands of them into a state of legal limbo. "Neither the Spanish citizenry, nor its political class seem aware of what is currently happening in Venezuela," she said, adding that Spanish officials fail to understand that Venezuelans are not just fleeing political persecution, but also the country's dire shortage of food and medicine.