In a surprising escalation of tensions over an ongoing political crisis, Trump has raised the prospect of military action in Venezuela. The Pentagon has said the White House has not issued any orders to the military. 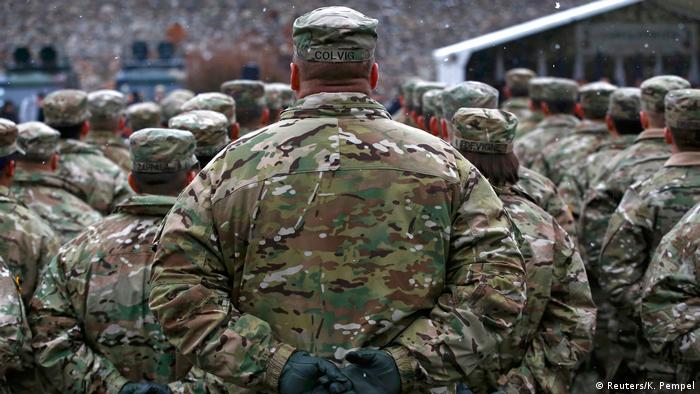 US President Donald Trump told reporters on Friday he was considering military action against Venezuela in response to its government tearing down democratic institutions.

Trump was speaking at a press conference while vacationing at his New Jersey golf course when he announced the surprise escalation.

"We have troops all over the world in places that are very far away. Venezuela is not very far away and the people are suffering and they're dying," he said. "We have many options for Venezuela including a possible military option if necessary," Trump told reporters.

Trump has previously attacked Venezuelan President Nicolas Maduro for his power grabs, describing him as a "dictator." But a military intervention would be an extraordinary escalation.

Trump explained that he was "not going to rule out" a military option, adding that it was "certainly something that we could pursue."

The Pentagon later said the US military had not received any orders on Venezuela from the White House.

"This is an act of craziness, an act of supreme extremism," added Padrino, who is also in charge of Venezuela's armed forces. "There is an extremist elite governing the United States, and honestly I don't know what's happening, what is going to happen in the world."

The Foreign Ministry was due to issue a statement on the "imperial threats" later.

The White House said in a statement that Maduro had requested a phone call with Trump in light of his comments, but said he would only receive his call in the event that Maduro restores democracy.

Meanwhile Peru's foreign ministry said that it condemned such threats of using violence in the conflict, adding that it was working on a response statement coordinated with other countries in the region. This came, however, after Peru ordered the expulsion of Venezuela's ambassador over his country's "break with democratic rule" under President Nicolas Maduro. Caracas followed hours later with its own tit-for-tat response, expelling the Peruvian embassador.

Against advice of generals

Trump's threat appeared to contradict the advice of his top national security adviser, General Herbert Raymond McMaster, who last week warned against giving Maduro ammunition to blame the "Yankees" for the situation in Venezuela.

McMaster told broadcaster MSNBC, "You've seen Maduro have some lame attempts to try to do that already," adding that it was important for the US and its neighbors to speak with a single voice in defense of Venezuela's democracy.

Ben Rhodes, a foreign policy advisor to former US President Barack Obama, said in a post on Twitter that Trump's threat was the "worst possible response" and would egg Maduro on.

Vicente Fox Quesada, a former president of Mexico and a vocal critic of Trump, denounced the US president's threats and wrote on Twitter that violence was not the right way forward.

US Vice President Mike Pence announced he would fly to Latin America on Sunday, for a six-day tour stopping in Cartagena, Colombia; Buenos Aires, Argentina; Santiago, Chile; and Panama City.

Pence was expected to meet with the four countries' leaders, deliver a major speech on US-Latin American relations, tour the newly expanded Panama Canal and discuss the situation in Venezuela.

Trump's administration has slugged Maduro and his inner circle with a series of sanctions in response to the South American leader's power grab.

Maduro's government responded to the latest round of sanctions by saying the US was "making a fool of itself in front of the world." On Thursday, Maduro said he hoped to speak to Trump soon.

Trump said he had discussed the ongoing crisis in Venezuela with Secretary of State Rex Tillerson and United Nations Ambassador Nikki Haley, both of whom were standing with the president when he spoke to reporters on Friday.

"Venezuela is a mess. It is very dangerous mess and a very sad situation," Trump said.

In four months of unrest in the South American nation, more than 120 people have been killed and thousands arrested. On Thursday, Maduro announced that the new Constituent Assembly would wield supreme power over all branches of government, even over his position.