Venezuelan President Maduro has declared the constituent assembly the most powerful institution in the country. The assembly moved to oust former chief prosecutor, Luisa Ortega, who has said she now fears for her life. 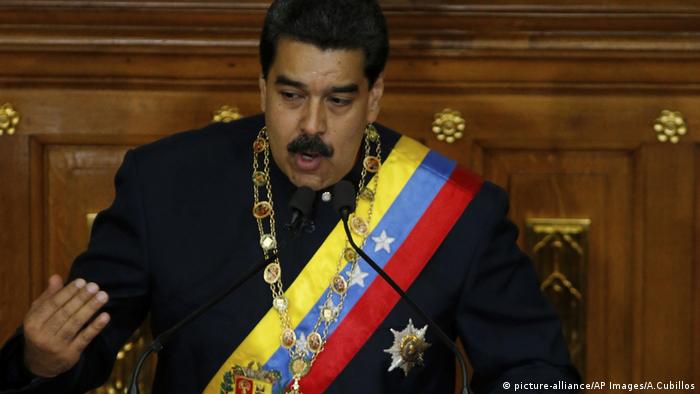 Speaking before the newly formed constituent assembly for the first time on Thursday, Venezuelan President Nicolas Maduro affirmed that the new legislative body was all powerful, as well as "sovereign and magnificent."

Addressing the 545 assembly members, the vast majority of whom are loyalists from his own Socialist Party, Maduro said: "As head of state I subordinate myself to the powers of this constituent assembly."

Maduro's critics have voiced fears that the assembly, which was inaugurated six days ago following a highly contested vote, would effectively get rid of any remaining checks and balances on the president's powers.

The president's move to consolidate his powers comes as Venezuela finds itself engulfed by increasingly violent anti-government protests, crippling inflation and a shortage of basic goods, including foods and medicine.

"This assembly had a violent birth," Maduro said, drawing a standing ovation from the assembly when he promised to jail violent anti-government protestors.

In its first session on Saturday, the assembly decided to fire Attorney General Luisa Ortega and ordered her to stand trial for alleged complicity in the deadly protests. Her office was then surrounded by government troops who barred her from entering. She subsequently fled on the back of a motorbike.

On Thursday, in an interview with the Reuters news agency, Ortega revealed that she has been in hiding since, fearing for her life.

"I do not know what dark intentions and dark plans they may have, not only to deprive me of my freedom but also deprive me of my life," she said, speaking from a safe house. "I'm being permanently persecuted. There's always a car following me, stopping where I stop, people taking photos of me and the places I go."

After more than a decade as Venezuela's chief prosecutor, Ortega broke ranks with Maduro and the Socialist Party in March. She accused the president of committing human rights abuses by letting his loyalist Supreme Court nullify laws passed by the opposition-controlled Congress earlier this year. As violence on the streets began escalating across the country, she became one of the most senior figures to denounce of the Venezuelan leadership.

Maduro calls for meeting with Trump

During his speech, Maduro also told the constituent assembly on Thursday that he wants a "personal conversation" with US President Donald Trump. "If he's so interested in Venezuela, here I am. Mr. Donald Trump, here is my hand," he said.

The offer came after the US last week imposed sanctions on Maduro, who the Trump administration has labeled "a dictator." The sanctions see the Venezuelan leader's US assets frozen and bar him from conducting business with American citizens. Several members of the new assembly were also sanctioned.

This has prompted fears on both sides that oil shipments between the two countries could be dramatically reduced. Venezuela is hugely reliant on oil exports to the US, which amount to around 740,000 barrels per day. Any significant reduction in trade would see Venezuela's already crippled economy lose one of its main sources revenue.

The US, meanwhile, which is in the midst of a drilling boom, continues to build upon on its oil reserves, estimated to be almost 700 million barrels.