Venezuelan officials have carried out more than 8,200 unlawful executions and jailed more than 12,000 people since 2013, according to a new report. Venezuelan diplomats dismissed the findings as "grotesque." 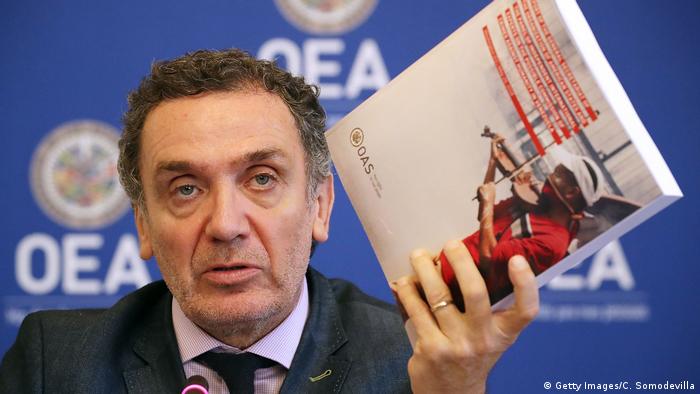 Venezuelan government officials have committed crimes against humanity and should be prosecuted by the International Criminal Court (ICC), an international panel of experts has found.

In a 400-page report, the expert panel said the government had committed more than 8,200 unlawful executions and arbitrarily imprisoned over 12,000 people since Nicolas Maduro succeeded Hugo Chavez as president in 2013. Officials also jailed more than 1,200 political prisoners and killed 131 demonstrators who took part in protests against Maduro beginning in 2014.

"The widespread and systematic targeting of opponents of the regime or suspected 'enemies of the state,' constitute the crime against humanity," the report found. "These acts, for which there is no legal basis, did not take place spontaneously or in isolation, but instead reflect a policy put in place by the Government of Venezuela through acts directed by the highest State authorities."

The report also denounced Maduro's recent re-election, finding that "the regime moved forward with the fraudulent elections, continues to act with impunity and the people of Venezuela endure increasing intimidation, fear, repression and assault."

The panel's members — Santiago Canton of Argentina, Irwin Cotler of Canada and Manuel Ventura of Costa Rica — called for a formal investigation into the charges and asked the Secretary General of the Organization of American States (OAS), Luis Almagro, to submit their report to the ICC.

ICC prosecutor Fatou Bensouda announced prior to the report's presentation that he had opened a preliminary investigation into criminal allegations against Venezuelan security forces, raising the possibility of a subsequent full investigation and prosecution.

The panel experts, who Almagro had tasked with the examination, based their findings on 26 witness testimonies, documents from victims and their families and findings by other international organizations.

Diplomats at Venezuela's mission to the OAS said the report was a "grotesque media farce" whose "sole objective is to overthrow the Constitutional Government of President Nicolas Maduro."

The South American country is in the midst of a severe economic crisis. Hyperinflation and massive food and medical shortages have prompted hundreds of thousands of Venezuelans to flee into neighboring countries.

Venezuela is mired in crises. Foreign Minister Jorge Arreaza spoke to DW about how the opposition and the US have brought the country to the brink of ruin and why Maduro's government backs socialism. (28.05.2018)

The president made the announcement during his swearing in ceremony before the Constituent Assembly. The government has jailed more than 300 people for reportedly inciting violence during anti-government protests. (25.05.2018)