EU foreign ministers have agreed to "swiftly" adopt new sanctions against Venezuelan officials close to President Nicolas Maduro. This after elections it said had failed to comply with "minimum international standards." 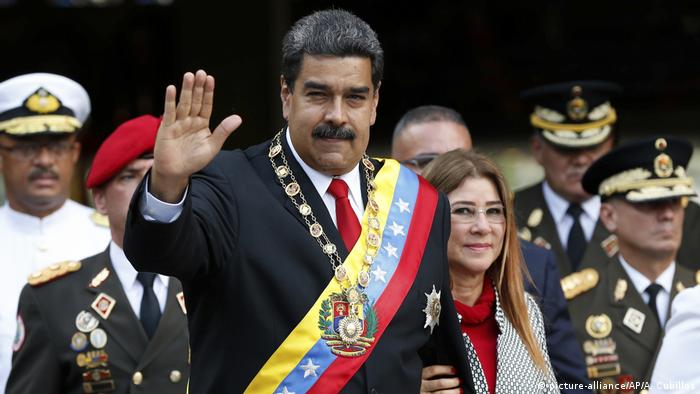 Foreign ministers of the 28-member bloc agreed at a meeting in Brussels on Monday to start work on fresh sanctions against officials close to Venezuelan President Nicolas Maduro. The move follows Maduro's re-election in a poll boycotted by the opposition and widely criticized by international observers.

"The EU will act swiftly, according to established procedures, with the aim of imposing additional targeted and reversible restrictive measures that do not harm the Venezuelan population, whose plight the EU wishes to alleviate," the ministers said in their formal agreement.

The sanctions are set to be formally adopted at a meeting on June 25 in Luxembourg, EU sources told the French news agency AFP.

The EU added seven senior Venezuelan officials including the interior minister to its sanctions blacklist in January. In November, it imposed an embargo on weapons and equipment that could be used for political repression.

Venezuela has accused the EU of "prejudice" and said the bloc had declined an invitation to send observers to the election.

Dismissing the elections as neither free nor fair, the ministers said in a statement: "The election and its outcome lacked any credibility as the electoral process did not ensure the necessary guarantees for inclusive and democratic elections."

"The EU calls for the holding of fresh presidential elections in accordance with internationally recognized democratic standards and the Venezuelan constitutional order," the ministers agreed, according to a draft statement seen by Reuters.

The ministers also discussed how to protect the EU's strategic and economic interests in Iran after the US' recent withdrawal from an international nuclear deal.

"Nobody believes it is going to be an easy exercise but we are determined to do it," EU foreign policy chief Federica Mogherini said.

Mogherini refered to a latest report from the International Atomic Energy Agency, which said Iran remains below the maximum level to which it can enrich uranium.

President Nicolas Maduro accused envoy Todd Robinson of a "military conspiracy" after new US sanctions were imposed. Maduro was re-elected on Sunday in a widely contested vote. (22.05.2018)