It requires little water, grows fast and lays deep root - we're referring to the neem. An intiative to plant the "miracle" trees in Peru’s arid north has proven to be a boon for the climate and local communities, too. 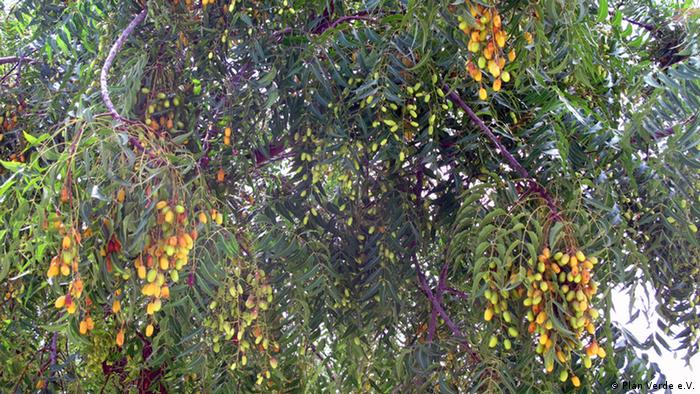 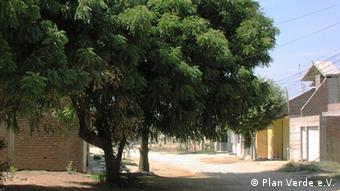 Piura’s first neem tree was planted 14 years ago. They often live up to 200 years

It’s hard not to be impressed by the neem tree – it’s robust, has several medicinal properties and its uses are so varied that it’s often referred to as the “village pharmacy” of South Asia. It grows across India, Sri Lanka and Myanmar.

The tree’s resilience is what prompted Elke Krüger to test out the species in Peru’s coastal north.

“We put it under water for several months, it can withstand temperatures of up to 50 degrees Celsius, and we even planted it directly on the coast in salt water,” says Krüger, who set up a non-profit organization called Plan Verde, or ”Green Plan.” And in the end, the tree survived. So did the other 200,000 neem trees that she planted in and around the city of Piura in northern Peru.

That’s a bit of a miracle in this part of the world. Not much grows along the coast of this Latin American country anymore. Its native tropical dry forest is disappearing fast, largely because the population is growing, and people increasingly depend on the land for wood and agriculture. That has taken a toll on the ground. Farmers have been struggling to deal with the dry, sandy soil that has started to resemble a desert.

Loose and sandy soil can no longer defend against storms and floods, either. Every two to seven years, Peru’s northwest coast falls victim to El Niño, a warming of the ocean waters in the Pacific. The climate phenomenon is unpredictable, bringing high and low pressure areas together with various ocean currents to create extreme weather patterns, like powerful storms and heavy rain. That further erodes valuable farm land, leaving the soil barren and the farmers desperate.

That’s where the neem tree comes in. Farmers in and around Piura have started to plant the trees around their fields. The neem tree can grow up to four meters in one year, and its roots reach deep into the earth, thus preventing erosion.

The trees also improve soil quality, and their fruits and kernels generate an oil that serves as a natural mosquito repellent and even prevents mosquito larva from growing. That quality makes neem oil a valuable weapon in areas where people are at high risk of contracting mosquito-born diseases like dengue fever or malaria. 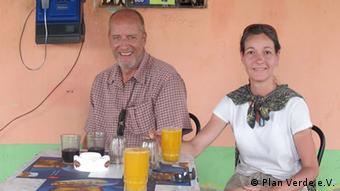 The Plan Verde group provides farmers in the area with neem trees to plant. The organization’s leader, Elke Krüger came to this part of Peru to help people who she believed had been forgotten by the rest of the world. Krüger became familiar with neem and its versatility from the time that she together with her husband ran a natural goods store in Hanover. It included various cosmetic, toiletry and medicinal products that contained neem oil.

In India, especially in the villages, the neem tree is essential to daily life. Traditionally, it’s used to treat all kinds of ailments from fevers to chicken pox, eczema, psoriasis, ulcers and other skin problems.

Ramesh Saxena, the head of India’s Neem Foundation, recalls how his entire family would bathe in hot water steeped in neem tree leaves as a way to protect against small pox.

“The neem tree can solve global problems,” he says. “Neem can be used to heal plants, animals and people.” His organizations’ motto is ‘greening India with Neem.’ In India, people have been taking advantage of the tree’s medicinal benefits for centuries. Many use it as a natural antiseptic toothbrush by breaking off a twig and chewing on it to clean their gums and teeth. And the tree’s sturdy, hard wood can also be used to make furniture or other products.

In northern Peru too, Elke Krüger and her husband are putting the neem trees to good use in a variety of initiatives. Friends of theirs, for instance, use the neem tree in a social project, using it to bring children and youth closer to nature. And the tall, leafy trees have also helped make Piura more green and pleasing to the eye, something many residents are happy about.

“They’re very happy. Trees are now growing in places where there was sand just one or two years ago,” Krüger says. 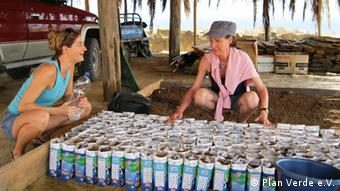 Elke Krüger was not the first to experiment with neem in Piura. A civil engineer originally brought the trees to the city because they grew rapidly, warded off mosquitoes and provided shade and beauty. When Elke Krüger found the trees, she started collecting their seeds for planting.

“The new owner of the house where we found the neem trees was a bit perplexed when he saw us trying to fish out the last seeds from the earth,” she says. “(The trees) are the foundation for the development of a culture.”

A culture, Krüger says, that was destroyed with large-scale deforestation in northern Peru – a development that she fears could happen in the Amazon. But she believes the trees provide both crucial raw materials, thus creating opportunities. 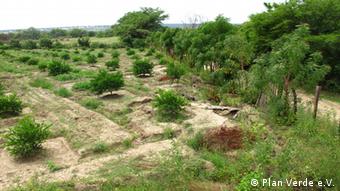 Neem trees around a field also protect against wind and stabilize the earth, like at this lime plantation

Plan Verde is not alone in its neem project - there are initiatives around the world involving the miracle tree. Indigenous communities in Mexico are planting neem trees in school projects, and the American company “Just Neem” uses profits from the sale of neem cosmetic products to help reforest arid regions in northwestern Africa.

Germany’s federal development agency, the GIZ, has also started using neem trees in West Africa. “It’s filled a gap that local species hadn’t covered,” says Martina Wegner, an expert in rural development and agriculture at the GIZ. But she adds that the neem tree’s incredible ability to adapt to any conditions has put native species in some areas in danger. “That’s why choosing whether to plant neem trees or other species has to be a decision that takes the local context into account,” she says.

There are still no long-term studies on the effects of planting neem trees in Piura. But Elke Krüger says the species is unlikey to spread on its own – the neem trees do indeed need a bit of water at the start. But the region around Piura is so dry that new seedlings would have to be grown in a nursery for there to be any sort of significant growth.

That is why, says Krüger, neem trees alone cannot serve as a long-term solution to desertification in northwestern Peru: the people, too, have to get involved. Plan Verde is aiming to build a vast network of helpers who collect seeds on their own and plant and care for them until they grow into trees. The organization provides environmental education and lectures to help inspire action and spread awareness.

But the goal isn’t to create a neem forest in Piura. Instead, Elke Krüger and her husband regularly experiment with various other tree species, too. In 2009 they started planting moringa trees, which grow leaves and fruit that can be used as food. Plan Verde aims to find as many different trees and plants that complement each other and can integrate into the existing vegetation without posing a threat to native species.