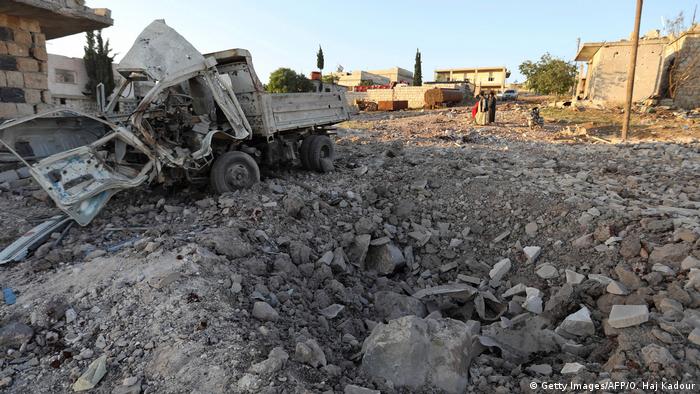 The United States continues to see signs the Syrian government may be using chemical weapons, including a possible chlorine attack in northwest Syria on Sunday, the State Department said Tuesday.

The State Department said it was still gathering information on an alleged May 19 chlorine attack in the last major rebel-held enclave of Idlib, and warned of consequences.

"We repeat our warning that if the Assad regime uses chemical weapons, the United States and our allies will respond quickly and appropriately," the statement said.

US President Donald Trump ordered airstrikes on Syrian military installations in April 2017 and April 2018 in response to alleged chemical weapons use by the Assad regime.

In September, Turkey, which backs some rebel factions, and Russia, a key backer of Damascus, agreed to establish a de-escalation zone that includes southern Idlib, northern Hama and parts of Latakia.

The agreement came amid international concern that a Syrian regime offensive would displace hundreds of thousands of vulnerable civilians and send a flood of refugees and extremist fighters to Turkey — and potentially on to Europe.

For the past several weeks, Syrian government forces and allied militia, alongside Russia warplanes, have carried out an offensive in Idlib targeting what they say are "terrorists."

Moscow and Damascus have accused jihadi forces of carrying out multiple assaults since early April, including a dozen attempts to attack Russia's Hmeymim air base using drones and missiles.

US accuses Russia of disinformation campaign

Major General Viktor Kupchishin, the head of the Russian military's Reconciliation Center in Syria, said militants captured by Syrian troops admitted to a plan to stage a fake chemical weapons attack in the towns of Saraqib and Jarjanaz in order to blame the Syrian government.

The State Department claimed that Russian allegations are part of a "disinformation campaign by the Assad regime and Russia to create the false narrative that others are to blame for chemical weapons attacks that the Assad regime is itself conducting."

"The facts, however, are clear," the statement said. "The Assad regime itself has conducted almost all verified chemical weapons attacks that have taken place in Syria — a conclusion the United Nations has reached over and over again."

The production method of John Al Haddad's soaps sold in his Schöneberg store, has not changed for centuries: the natural product is a sublime combination of pure olive and laurel oil. (16.05.2019)