Relations between Russia and the US are on a downward spiral of sanctions and accusations. But on the 50th anniversary of the first US exchange program to the Soviet Union, its alumni have a different take on ties. 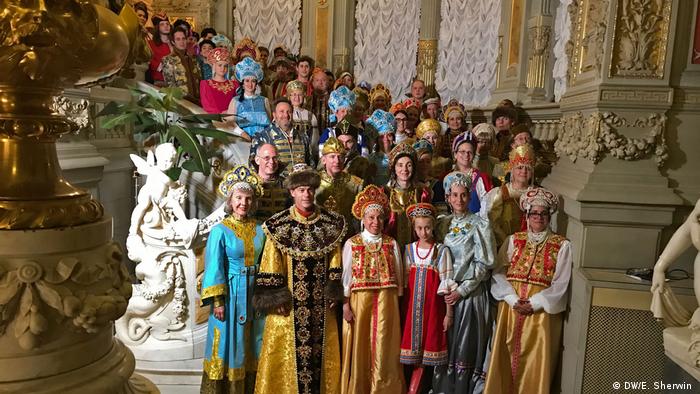 There are around 50 people here in the ornate wood-paneled room at St. Petersburg's imperial Vladimir Palace, right on the Neva River. They are learning dance steps. A teacher counts them in. They are dressed to look like 19th century Russian royalty, wearing red silk beaded gowns with traditional headdresses, gold and fur-trimmed coats, embroidered cotton shirts and leather boots. But despite appearances, most of the people at this Russian-themed ball are American.

Those dancing here are alumni of the Russian program at the Council of International Educational Exchange (CIEE), a non-profit organization promoting educational exchange. They are celebrating the 50th anniversary of the Leningrad / St. Petersburg Study Center. For decades, until the collapse of the Soviet Union, CIEE's center was the only way for Americans students to study at a Soviet university and get a glimpse of Soviet reality. Today, the CIEE program still provides language courses, as well as electives on subjects like literature, history and politics at St. Petersburg State University. There is also a program in Moscow. 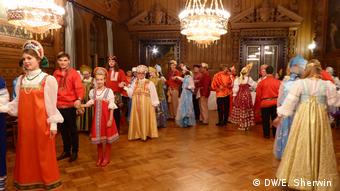 CIEE alumni and their guests celebrated at a Russian-themed ball

The iron curtain may no longer be separating the West from the East, but when it comes to US-Russian relations things still aren't easy. In 2009, US President Barack Obama announced a 'reset' in the relationship. But with the annexation of Crimea in 2014 and the Ukraine crisis, a downward spiral of sanctions began. And widespread accusations of Russian meddling in the US elections in 2016 haven't helped. In fact they led Obama to expel 35 Russian diplomats at the end of last year, which in turn led to a tit for tat of diplomatic staff cuts in both countries. The accusations of election meddling also quashed Russian hopes of an improved relationship with incoming US President Donald Trump, who had earlier wondered on Twitter whether Russian President Vladimir would become his "new best friend." And Russia and the US have been at loggerheads over the conflict in Syria as well.

"I am disappointed because I think it's very few people that are making very, very bad decisions that affect entire nations," Rachel Neale, who was on the exchange last year, says of current US-Russian relations in between dances at the CIEE anniversary. 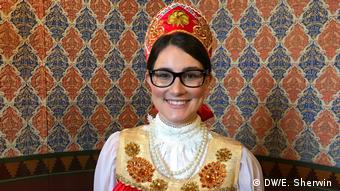 She thinks the political climate has reinforced old myths about Russia in the US — and she has experienced those stereotypes first hand. "My own family was very against me learning Russian, especially wanting to come live here or even study abroad here [in Russia]," she explains. "My family was more scared about me living in St. Petersburg, Russia, than me living in a third-world country if I were to join the Peace Corps [a US international volunteer program — Editor's note]."

Rachel says she is from a rural part of Florida, and people there simply couldn’t understand why she had fallen in love with Russian culture and literature, why she would want to study abroad in Russia during university, and why she wanted to come to Moscow after college to work as an English teacher. "I believe they really fall into the ideological pit of Russia is a bad place, Russians are bad people."

For many of the alumni here at the CIEE anniversary, the program was their first experience of Russia or of the Soviet Union at the time — and it gave them a chance to take a look behind the persistent stereotypes. The program's anniversary gives the around 60 alumni taking part a chance to celebrate Russian culture with ballet and music performances, lunches and excursions — and to reminisce about their experiences on the exchange. For many of them, their time in St. Petersburg started off their careers as diplomats in the region, as Russia analysts or journalists reporting on and from Eastern Europe. 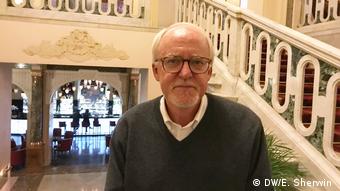 John Beyrle, a former US diplomat who served as ambassador to Russia from 2008 to 2012, says his experience on CIEE in 1976 was "life-changing." He remembers the food in the student cafeteria being "hard to eat" but says that he was moved to tears by a visit to the Kirov Ballet (now known as the Mariinsky Ballet) at the time. "I was a kid from a small town in Michigan, I'd never been near a ballet in my life," he adds.

Beyrle explains that it was his time on the exchange that made it clear to him that he wanted to join the foreign service. "The political paradoxes of the country to me were fascinating." After all, he says the Soviet Union was a country "with a world-class space program and nuclear weapons to rival our own, and yet there were long lines on the streets of people to buy bananas or toilet paper."

Like many long-time Russia observers here at the CIEE anniversary, Beyrle admits he is concerned about the current situation. "US-Russian relations right now are in a very tough spot, we don't have a lot of trust between Washington and Moscow, and we don't have a lot of contact between Washington and Moscow," he says, adding that it probably doesn't help that the new administration "has not had a lot of experience in foreign affairs."

He believes there needs to be a "ceasefire" on the diplomatic blows of the past few months. "We're in a pretty deep hole right now. And I think the best thing that both countries can do is to stop digging."

Soviet patterns of black and white 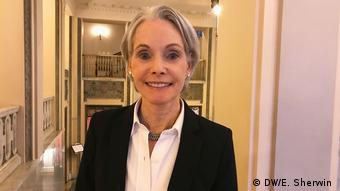 Beyrle says part of the reason for the current freeze in relations is that neither side has quite forgotten the past, even if the intense ideological rivalry between them has actually only persisted over the "last 50 or 60 years, during the Cold War."

Jill Dougherty, a Global Fellow at the Woodrow Wilson Center, agrees. She was in St. Petersburg in 1969 and 1971 on the CIEE exchange program. Then, she says, relations between the US and the Soviet Union were more clear-cut. Now, falling back on the "understandable black and white" paradigms of the Cold War is simply easier for many Americans, including US politicians.

"In fact I hear sometimes members of Congress who say, 'Soviet Union …,' oops, I mean Russia.' Because people remember that, that's where we all come from. But that's not the reality right now." Instead, she says "Russia is a modern country that’s still trying to define itself - it is a much more complicated place."

Looking back on their experiences and the insights they gained, alumni of all generations at the anniversary believe exchange programs like CIEE are crucial to improving US-Russian relations in the long term. Jill Dougherty insists: "This is not some type of airy fairy thing."

"You have young Americans who are going to Russia, who are meeting Russians personally, who are being exposed on an academic basis to Russian culture, Russian history. [...] And culture plays a big role in this society, language, culture and history. If you ignore that or you're ignorant of it, you will not understand what Vladimir Putin is even saying."

But with Donald Trump reportedly considering reducing visas for foreigners coming to the US for cultural and particularly work exchange programs, programs like CIEE are far from safe in the current political climate.

In fact, according to organizers of the CIEE exchange program, the number of students coming to Russia has already taken a dive due to the current low in US-Russian relations. Irina Makoveeva, the director of the Russian side of CIEE, says it is affecting funding for scholarships and grants for learning Russian. "These scholarships still exist but they are not available to students who want to study Russian in Russia."

Instead, she explains "after the sanctions, many programs were opened outside of Russia, in former Soviet Union republics." Students who want to be able to have prestigious scholarships to show on their CV are going on exchanges in countries like Moldova, Estonia or Kazakhstan, instead of in Russia, says Makoveeva.

A love for Russia

Still, at the CIEE anniversary, the word of the weekend is "optimism" when it comes to US-Russian relations.

After all, as Irina Makoveeva explains, one of the things the CIEE program hopes students will take away from their experience is a love for Russia and understanding for Russian people. Watching the alumni relish a live performance of excerpts from Russian operas including "Eugene Onegin" and  clap along to the folk song "Kalinka," it seems this exchange program has certainly achieved its goal.

Full disclosure: The author's father is a CIEE alumnus and took part in the 50th anniversary celebrations.