Russian anti-abortion group fights and prays for ban | Europe | News and current affairs from around the continent | DW | 23.08.2017

A Russian anti-abortion group claims it has collected a million signatures supporting a ban of the procedure. Nearly 100 years after Soviet Russia legalized abortion, the debate is back, reports Emily Sherwin in Moscow. 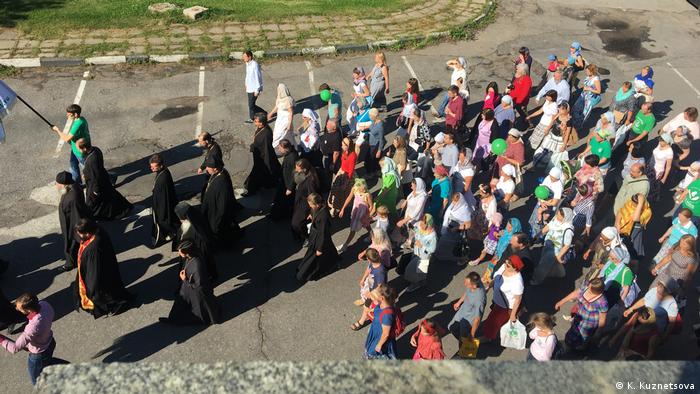 A gold-plated icon of the Virgin Mary watches over their prayer. At an Orthodox church on the outskirts of Moscow, the worshippers light candles during a midnight service. Some of them are wearing bright green T-shirts or pins, all with the same logo. It shows two hands holding an embryo, seemingly protecting it, and the words "For Life." Those gathered here tonight are praying for an end to abortions in Russia.

Their midnight service rounds off the first full day of "For Life's" eighth annual "International Festival for Social Techniques to Protect Family Values" in Moscow. The group has now collected one million signatures calling for an abortion ban in Russia. And they plan to hand over their petition to Russian President Vladimir Putin himself. One of the signatories is the head of the Orthodox Church, Patriarch Kirill.

"During the festival we are praying to end abortions. That is our main goal, our main grievance. And what we are putting all our strength into," Anastasia Meshennikova, the movement's Moscow coordinator, explains at the festival. "We are also praying to be a united, tight-knit team, a peaceful and good-natured one," she adds.

One hundred sixty anti-abortion groups from across Russia are part of the "For Life" movement. The activists say there are around 300 anti-abortion groups in the country. Most of those assembled here today are Orthodox Christians, even if they say religion is not a prerequisite for volunteering. The festival's program includes lectures, training sessions and meetings with representatives of European pro-life groups from Spain, Serbia and Italy. "For Life's" volunteers and staff believe that life begins at conception. Many at the event have brought their children, who play with the green and white balloons hung on the hotel's banisters while they wait for their parents. The stairs leading up to the conference rooms are decorated with the pictures and names of small children who "could have not existed."

Along with their push for signatures, "For Life" does charity work to support mothers who decide to have children. They distribute food and clothing to poor families and run homes for young mothers in difficult social situations - if they decide not to have an abortion. The movement says their work has "saved" 6,907 children since 2015.

Still, the activists believe an abortion ban is necessary. "We understand that when there is a law that convinces and disciplines people. That's why we think there needs to be legislation," Meshennikova insists. "And if people who are united by one idea can do so much, how much could we do with the support of the government?"

The Russian government has already shown its support for the group's anti-abortion cause. Last year, when the head of the Orthodox Church signed the movement's petition, the Russian children's rights commissioner, Anna Kuznetsova,  spoke out in favor of excluding abortion from state health insurance. 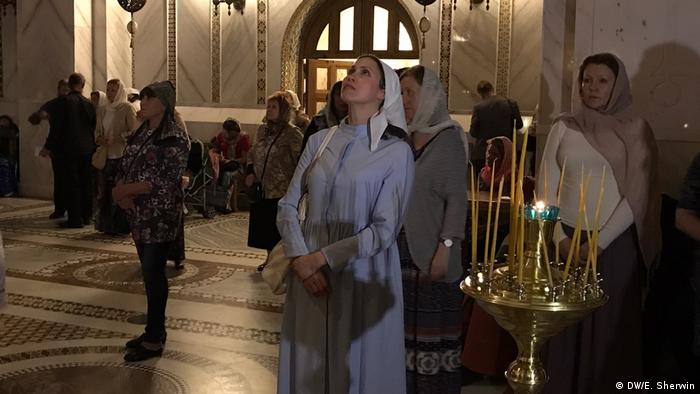 Anastasia Meshennikova and her cohorts pray for an end to abortion

Earlier this month, the cabinet announced a plan called "Developing a healthy way of life." One of its aims is to lower abortion rates by 30 percent in the next eight years. In order to achieve the goal, the government will launch an advertising campaign against abortion starting in March 2018.

But the debate doesn't seem to be going away. Along with the growing influence of Russia's Orthodox Church on politics, Russia's abortion statistics are likely a factor in this. The country still has one of the highest abortion rates in the world. There were over 800,000 abortions in 2016, down from nearly 850,000 the year before, according to government statistics. Around 23 abortions per 1,000 women were carried out in 2015. In Germany, by comparison, 5.6 abortions per 1,000 women were carried out the same year. 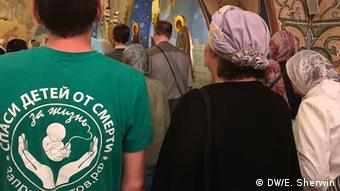 Soviet Russia was the first country worldwide to legalize abortions, in 1920. The procedure remained common even when abortion was banned under Josef Stalin from 1936 to 1955. Condoms were known as "galoshi," or rubber boots, and hormonal contraceptives only became available in the 1990s after the fall of the Soviet Union.
Read - Why Stalin is causing a classroom storm in Russia

Hormonal contraception is often expensive and not "widely available," says reproductive health expert and gynecologist Liubov Erofeeva, director of the Russian Association for Population and Development.

Essentially "our population is faced with the choice of condoms or interrupted sex. Those are not dependable methods at all. And that is why we have such a high number of unwanted pregnancies and abortions."

In Russia, the push to lower abortion rates is often seen as part of a "patriotic battle" to improve birth rates in Russia. Here at "For Life's" festival, a dramatic quote from Russian President Vladimir Putin towers over the proceedings: "The question of demography is essential. Either we will exist - or we will not." 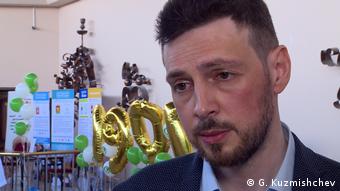 It seems to be working. Chesnokov says his group's activities are mainly financed by private donors, with the church often calling for support for them. But some individual programs are financed by government grants. A 2015 agreement between the Russian Orthodox Church and the health ministry has allowed psychologists paid by anti-abortion organizations to work in state health clinics, distributing information and convincing women not to carry out the procedure in consultations. There are 200 "For Life" psychologists in clinics in Moscow alone, according to one of the movement's activists.

But banning abortion isn't widely popular. A recent poll by the independent Levada Center shows that only two percent of those surveyed were in favor of a full ban and seven percent thought that abortions that weren't medically necessary should be banned. Fifty-nine percent believe the government should let people decide for themselves. 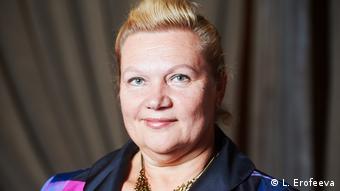 Liubov Erofeeva is skeptical about claims that restricting abortion will lead to more births. "Statistics in all the countries of the world prove that the two sets of data aren’t connected," she says. "And by banning abortions we are not getting rid of them. People won't renounce them. They will simply be driven into the underground."

Only sex education classes and government-funded contraception can actually lower abortion rates, Erofeeva says. And even then "I can't say that [abortions] will disappear; they haven’t disappeared anywhere."

Erofeeva thinks the push for a ban is doomed to fail, though she hasn't entirely ruled it out.

"I don't want to believe it could happen. Highly professional people, who have dedicated a lot of their life to protecting reproductive rights, work in the ministry of health. They are hardly likely to take measures that are known to be damaging to women's health - and an abortion ban is a damaging measure."

The cocktail of ideologies behind Vladimir Putin 24.03.2022

Eurasianism is an idea dating back to the beginning of the 20th century. Largely ignored by the West, it has become a geopolitical concept guiding the Kremlin.