Seeking justice for Stalin′s victims | Europe | News and current affairs from around the continent | DW | 23.11.2016

Who killed Stepan Karagodin? The question has preoccupied his family since the Russian peasant was executed almost 80 years ago. Now his great-grandson says he knows the killers' names. Aaron Tilton reports from Moscow. 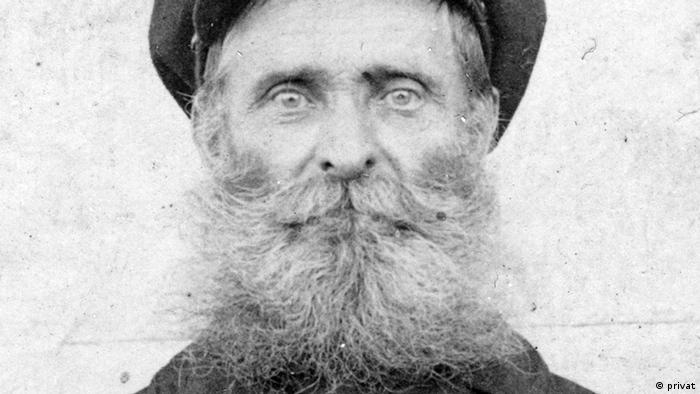 A 34-year-old man from Tomsk in central Russia is planning on filing posthumous charges against the men he blames for executing his great-grandfather almost 80 years ago. Denis Karagodin says he's tracked down the men responsible for condemning and executing his ancestor, Stepan, during Stalin's purges in the 1930s; a first in a country still grappling with the legacy of Stalin's repressions.

Stepan Karagodin was arrested on charges of spying for the Japanese and quietly disappeared behind the opaque web of the Soviet security apparatus. For years his family wondered what had happened to him. Was he alive? Where was he being imprisoned? Unbeknownst to his family, Karagodin had been executed by firing squad shortly after his arrest. But the first official confirmation of his whereabouts didn't come until the 1950s, when security officials told Karagodin's family that he had died in police custody. 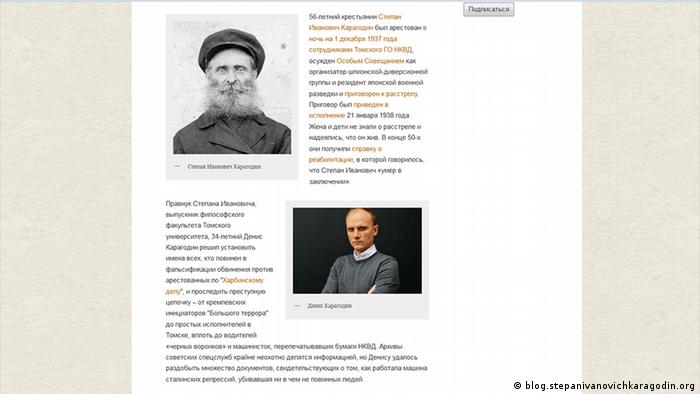 Opinion: The Kremlin's silence about Stalin

A man from Siberia wants to sue his great-grandfather's murderers; among them Joseph Stalin. Heated discussion has ensued in Russia. Only the Kremlin has no a clear position – for a reason, says Yuri Resheto. (25.11.2016)

"Our investigation started on December 1st, 1937 [the date of his great-grandfather's arrest]. We are from a good family. We support each other and don't leave anyone hanging. It was a simple question." Denis told DW. But the search would be a long one. Denis spent years poring over archival documents and petitioning the government to give him access to records kept by the NKVD, the precursor to the KGB. But his research was hampered by Russian's notorious bureaucracy and Denis says he had to keep his intent secret from archivists out of concern they could cut off his access to the records he needed.

The years of uncertainty surrounding his great-grandfather's fate was an open wound for his family. Denis says precisely this pain kept him going: "My family's suffering gave me the strength and forced me to be as precise as I could so that no one could question my work. And I was successful."

That success came in the form of a document ordering his great-grandfather's execution which contained the names of the men who carried out the killing and helped Denis trace the decision back up the chain of command all the way back to the NKVD leadership in Moscow.

The suffering experienced by Karagodin's family is hardly unique in Russia. Some estimates say as many as 12 million people were caught up in the wave of repressions that accompanied Stalin's rise to power as the head of the Soviet Union. And while the victims were many, Russia never officially investigated the crimes against the millions of political dissidents and innocent victims persecuted in the name of state power.

As the Kremlin increasingly looks to the past to in an attempt to redefine Russian self-perception, the life and times of Joseph Stalin seem to be getting something of a whitewashing at home. The dictator is widely seen as a ruthless leader, but also as one who did what was necessary to win the Second World War and helped shape the USSR into a major power in its aftermath.

"It's important for Russia to give off the appearance of a strong government and a major power. And when people think of a major power in Russia, they are increasingly turning to Stalin as the symbol of major state power," saysIrina Scherbakova from International Society Memorial, a Moscow-based human rights and education group. 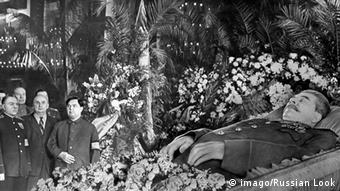 Stalin's image and era is undergoing a facelift in Putin's Russia

And the Russian public is showing an increasing acceptance of this re-imaging of the Stalin era. On Thursday, the new film "Panfilov's 28" debuts in Russian theaters. The historical drama tells the patriotic story of 28 soldiers' last stand in the face of the Nazi push toward Moscow during World War II. The events depicted in the film, based on an article from the Red Army's wartime newspaper, have been criticized by historians, who say they are likely grossly exaggerated or potentially entirely fictional. But despite the criticism, the film still secured around half a million euros via a crowdfunding campaign. And recent surveys reported around 40 percent of Russians thought Stalin's reign produced "more good than bad."

Some experts fear that his increasingly positive view of the Stalin era could hamper efforts by victims' families to discover the truth about their loved ones' fates.

Justice for the dead

Denis wants to make sure his great-grandfather's fate isn't forgotten. He's planning to file charges posthumously against the men he says were involved with the killing. In the Russian Federation, there is currently no statute of limitations on murder. Denis hopes that this could open up a legal channel for him to force the government to publicly record the role Soviet authorities played in Stepan Kargodin's death.

"It's simple, the killers should be held accountable for their role in mass murder and they will be. That is my constant and final goal," Denis commented.

Denis Kargodin's choice to accuse his great-grandfather's killers publicly could inspire more people to explore the roles their own families played during Stalin's repressions, according to Scherbakova from International Society Memorial: "I think there will be more. I don't know if they'll accuse the perpetrators [publicly] like Denis has. But there will be more people who want to know their families' history and aren't afraid to discover the truth. Denis is on the right path and many people will follow his example."